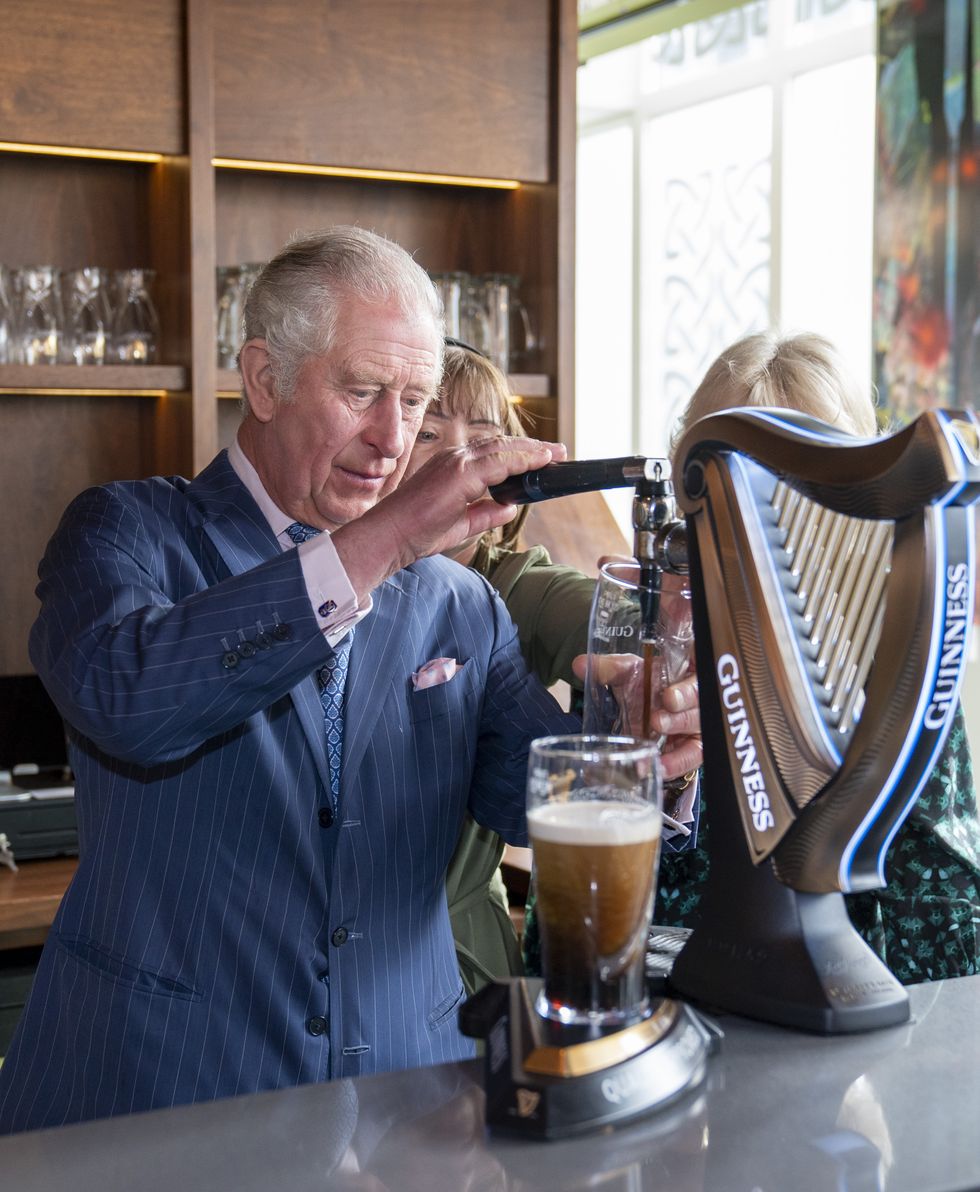 The Prince of Wales worked up a thirst for a Guinness trying his hand at Irish drumming as he marked St Patrick’s Day with London’s community from the Emerald Isle.

Charles and the Duchess of Cornwall were keen to visit the Irish Cultural Centre in west London ahead of a visit to Ireland next week and were given a whistle-stop cultural tour from celebrated writers to traditional Irish dancing and music.

A pint of the black stuff seemed to have Charles enthralled and he was given the chance to pull a pint under the careful instruction of volunteer bar manager Jude Hynes.

She showed him the angle to pour it and after being told to watch the drink to settle, after filling the glass by three-quarters, he joked: “How much longer do I have to wait?”

He took a sip after topping up his pint and got a round of “cheers” and applause from the invited guests, and after a second taste Camilla pointed out he a speck of foam on his nose.

“He was fascinated to see the process of the Guinness settling, he was very interested in that, the minute or two it took – with Guinness you’ve got to treat it gently.”

The centre in Hammersmith has been the home of Irish culture in the UK for the past 25 years – with its own auditorium, bar and performance spaces, it caters for a range of art forms from live music, film, theatre, literature to the visual arts.

Alongside culture it also promotes community and education programmes, and aims to attract not just the Irish diaspora but all Londoners.

The couple tried their hand at playing the Irish drum called a bodhran which requires a deft wrist action and amateur player Tad Sargent, who performs regularly at the centre, gave the royals a quick tutorial.

Charles concentrated as he tried to follow the hand actions of his helper and then an Irish tune began and the couple were part of the band which featured violins, an accordion, guitars and uilleann pipes.

The future king and his wife tapped their feet as they played along to the rhythm produced by the group of musicians, who ranged from pensioners to school children.

Mr Sargent said about Charles: “I told him he’s got natural rhythm and he said to me on the side ‘I need to work on my syncopation’.”

During their tour, the couple visited the centre’s extensive library of books about Ireland or by Irish writers, joined a singing group and watched young people perform Irish dancing.

When they joined a class of knitters, Charles quizzed the elderly ladies about their efforts and when he asked Cathy Richardson “do you get better?”, she made the prince chuckle when she replied “Listen love, I’ve been knitting since I was four years old.”

Before leaving, Charles was asked to unveil a plaque to mark his visit but he joked “I can’t unveil it this way” raising his legs as if mimicking the Irish dancers who had performed moments earlier and whipped off its covering to cheers.

After the visit, Peter Power-Hynes, the centre’s chairman, joked: “As we were leaving, the prince said ‘who’s finished my pint?’, I think Jude took the glass as a souvenir.

“He also said Guinness was the best drink ever invented.”

Psychiatrist spammed with one-star reviews after testifying against Depp