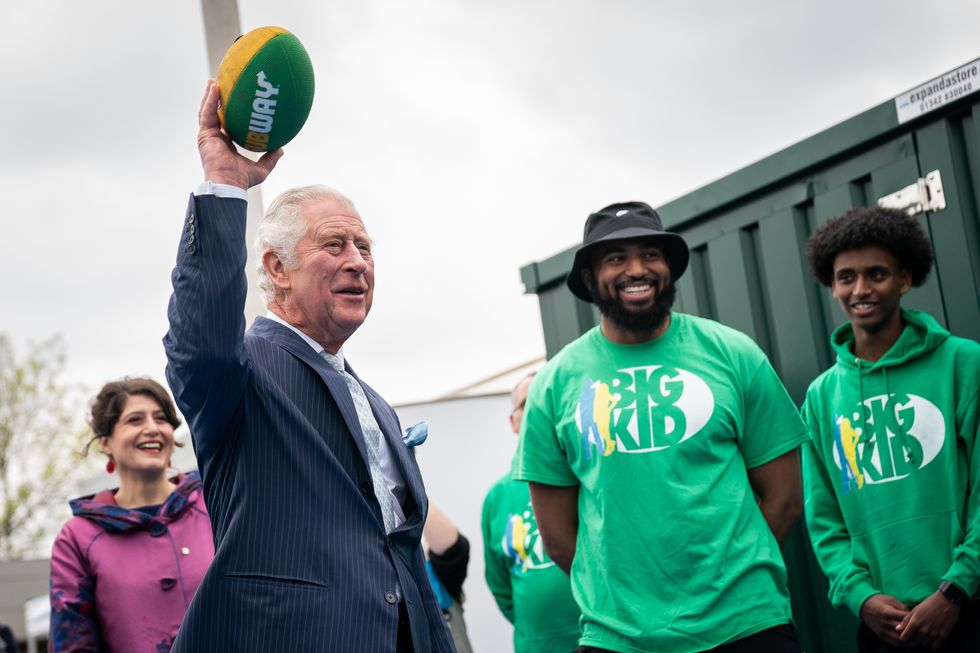 The Prince of Wales tried his hand at American football when he visited a charity which aims to end youth violence by supporting the development of teenagers across the capital.

Charles gave his best impression of American quarterback Tom Brady and threw a football after he was coached by a volunteer from the Bigkid Foundation, which has ambitious plans for its home in Brixton, south London.

The organisation runs a number of initiatives, from its American Flag Football programme that uses sport to create a positive sense of self-worth, to the Breaking Barriers Leadership programme engaging with pupils at risk of exclusion.

Jonathan Mbanefo, 18, a volunteer coach with the charity, watched his new pupil Charles throw the football twice and said: “He did really well, I think he liked it. He got the hang of it really quickly – some people don’t get it but he did.”

Bigkid was founded by its chief executive Shaninga Marasha and owes its origins to a mentoring project he started in 2000, when a sixth form student, to help youngsters who appeared destined to be expelled from school.

He developed the idea with a group of friends while studying at university and they initially used music, but it developed into a leadership programme with other initiatives.

The charity is now working in eight London boroughs and is developing a disused adventure playground where the organisation is based.

Michelin star chef Michel Roux grew up in the area and is an ambassador for the organisation, and he was on hand as a group of youngsters showed Charles goat cheese and asparagus canapes they had made.

When Charles sat down with a group of older children, he listened as they discussed how the pandemic had affected their mental health or left them feeling isolated. One young man, now a volunteer, said his anger issues had been greatly helped by the charity.

The prince told the group: “But so much, isn’t it, is based on self-esteem, it’s how to create that confidence.”

He went on to ask the young people: “Is it an area here where you have real problems with gangs?”

A young woman replied “yes and no” and said “all the youth violence that happens locally, it is upsetting to see”, but she suggested some had taken one path while others had taken another.

Mr Marasha said after the visit: “What we’re trying to do here is reach the community, reach young people and create positive pathways for them, give them positive things to do because our goal is to end youth violence.

“We know in order to do that you have to create a family unit around young people and create opportunities for them.”

He described the royal visit as an important acknowledgement of their work: “Just having that co-sign that what we’re doing is legitimate and it matters to people of that stature is a big deal for us and a big deal for the young people that we work with.”