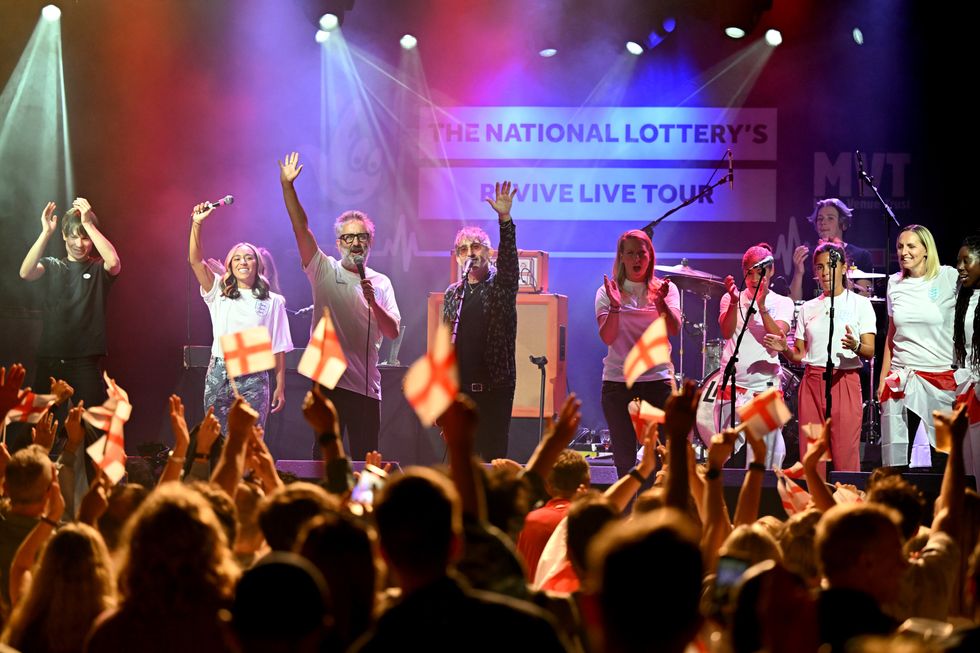 David Baddiel has reunited with the Lightning Seeds to perform a special rendition of their football anthem Three Lions for England fans ahead of the Euro final against Germany.

At the end of the band’s set at Camden’s Electric Ballroom on Saturday, they sang the classic football song with altered lyrics in celebration of the Lionesses’ success in the tournament so far.

The Lionesses helped get the audience in a celebratory mood in anticipation of the team’s appearance in Sunday’s women’s Euro final against Germany at Wembley Stadium.

The changed lyrics of the football anthem made reference to a number of players in the women’s squad, with one verse saying: “But now I see / Ellen White standing tall / Russo ready to score / Stanway belting the ball / And Beth Mead screaming.”

Comedian Frank Skinner, who recorded the 1996 hit with Baddiel and the rock band Lightning Seeds, was unable to join the group on stage on Saturday due to unforeseen circumstances but cheered from the sidelines.

Skinner said: “I was gutted not to be there but Chelcee and the Lioness legends did an amazing job on stage with Dave and the Lightning Seeds.

“All we now need is a win in the final. Come on England!”

Singer-songwriter Grimes, who has played football for a number of teams including Everton and Tottenham Hotspur, filled in for Skinner.

She said: “What an amazing buzz being part of this unique National Lottery gig and singing our hearts out in support of the Lionesses.

“This unique rendition of the famous fan anthem is something I’ll never forget. I never thought I’d ever share a stage with my heroes.”

Comedian Baddiel added: “The National Lottery gig has been a lot of fun. There was a great atmosphere in the venue and although we missed Frank, Chelcee did a cracking job in his place.

“I hope we did the England team proud and wish them all the luck for the final.”

The special event was part of the third year of The National Lottery’s Revive Live series, which provides ongoing support for grassroots live music in partnership with the Music Venue Trust.

The gig also celebrated that thanks to National Lottery players more than £50 million of lottery funding has been invested into football in ways that directly benefit the women’s and girls’ games.

This includes support for female players on the performance pathway including current England squad members such as Lucy Bronze, Jill Scott and Ellen White.

David Baddiel praised for ‘superb’ definition of antisemitism on GMB