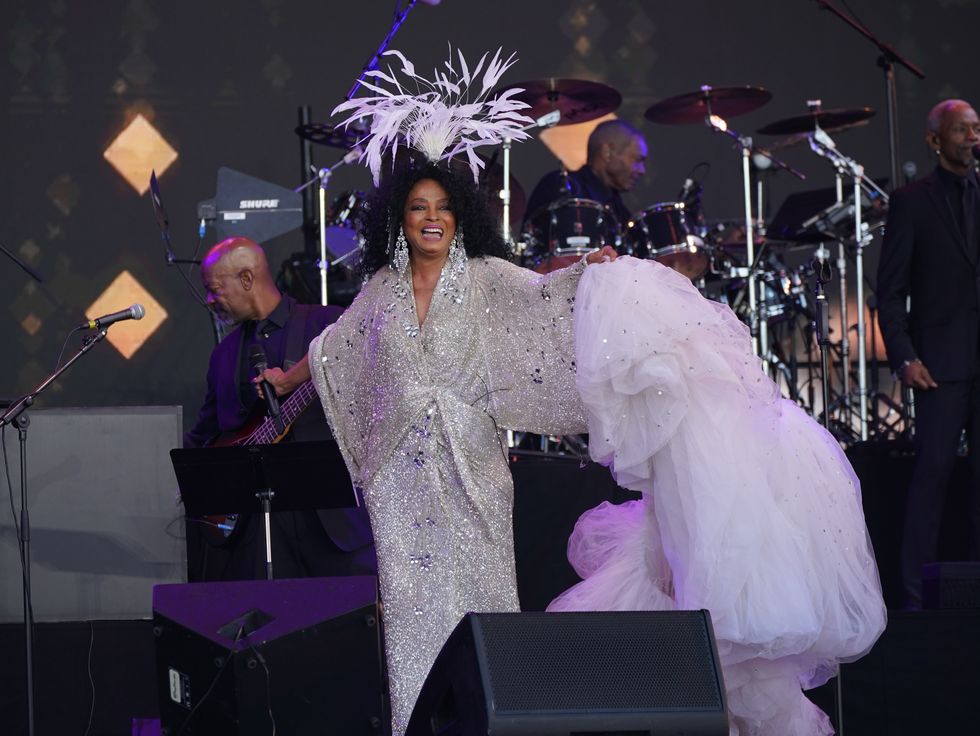 Soul singer Diana Ross told the thousands gathered at the Pyramid Stage to “feel the power of love” as she reeled off hit after hit.

She kicked off her set with 1980 classic I’m Coming Out drawing rapturous applause during her Sunday teatime legends slot on the final day of Glastonbury wearing a sparkly dress with a matching white cape and headpiece ensemble.

The soul singer treated the crowd to a selection of classics including Baby Love, You Can’t Hurry Love, Stop! In The Name Of Love and at the conclusion of Chain Reaction pink confetti was launched from the stage.

She also performed I Will Survive and Ain’t No Mountain High Enough, which she released a hit version of in 1970.

A slideshow of photos were shown to the crowd from Ross’s long career in the build-up to her appearance on stage – which was met with loud cheers from the audience.

Defying earlier ominous forecasts, the sun shone down on the packed crown, armed with flags and vibrant festival wear, as she reeled off songs from her new album titled Thank You.

She said: “During these last three years, I’m going to call it a vacation, it gave me a chance to really think about the important things in life because I couldn’t go on the road and the album is called Thank You.

“I want you to know how grateful I am for this life, I am filled with thankfulness for each of you, I love the idea of singing in the daytime … I can look into your eyes.”

Later she said: “Feel the power of love.”

After announcing she had recently turned 78, Ross urged the crowd to dance with her as a line of security staff performed a routine to Upside Down before the camera panned to show fans holding Diana Ross masks.

Earlier on Sunday, George Ezra confirmed he was the secret guest on the John Peel stage on Sunday, three days after pulling out of Tinderbox Festival in Denmark due to a “nasty bout of laryngitis”.

Ezra got his set off to an electrifying start, walking onto the John Peel Stage to Anyone For You before launching into a rendition of Cassy O’ with hits Hold My Girl, Paradise and Blame It On Me also featuring.

The Hertfordshire singer-songwriter departed the stage to rapturous applause following a rendition of Shotgun.

Kendrick Lamar will close Glastonbury as the festival’s final headliner on Sunday, the day after Sir Paul McCartney delivered a history-making set.

The US rapper will be the last performer to take to the Pyramid Stage, concluding the festivities at Worthy Farm in Somerset.

Lamar’s show on the main stage will mark his Glastonbury debut, and he is expected to play a range of hit tracks including songs from his recently released fifth studio album Mr Morale & The Big Steppers.

It was announced in 2020 that the Grammy-winning singer would headline Glastonbury’s 50th anniversary but the festival has faced two years of delays due to the pandemic.

As he took to the Pyramid Stage, the former Beatle became the festival’s oldest solo headliner, a week after he celebrated his 80th birthday.

During his more than two-hour set, he played a range of classic songs including Hey Jude, Blackbird, Live And Let Die, Ob-La-Di, Ob‐La‐Da and Get Back.

The electrifying show was further amplified as he introduced Grohl to the stage to sing I Saw Her Standing There and Band On The Run, marking Grohl’s first public performance since the death of his Foo Fighters bandmate, drummer Taylor Hawkins.

Springsteen took to the stage to play Glory Days and I Wanna Be Your Man alongside Sir Paul.

As part of the encore, through special technology which could isolate John Lennon’s vocals from old recordings, Sir Paul was able to duet The Beatles’ track I’ve Got A Feeling alongside his former bandmate on the Pyramid Stage.

Earlier on Saturday, the Pyramid Stage hosted a speech by Greta Thunberg where she called on society to take on its “historic responsibility to set things right” with the global climate crisis.

Her speech was followed by a set by pop rock band Haim, with Noel Gallagher’s High Flying Birds taking to the Pyramid Stage after them.