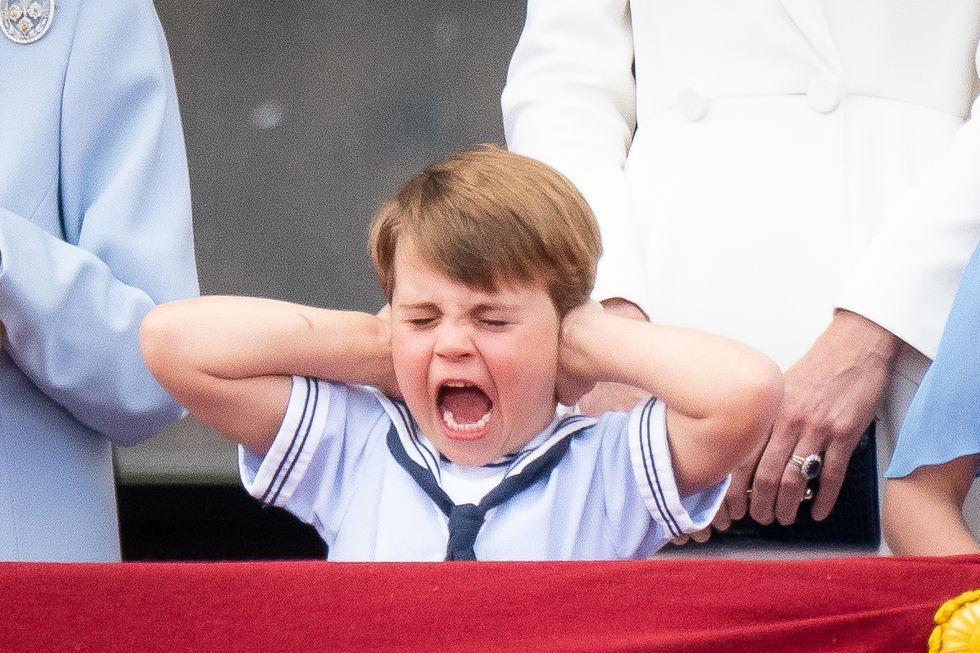 Prince Louis stole the show during his appearance on the Buckingham Palace balcony as the Trooping the Colour flypast left the young royal in awe.

As the opening chapter of the Queen’s Platinum Jubilee celebrations drew to a close, the prince pointed at planes, waved at the pilots, stuck his fingers in his mouth and pulled a funny face.

When the aircraft bore down on the Queen’s official London residence and then roared overhead he covered his ears with his hands and let out a howl of excitement.

Louis stood next to the Queen, known affectionately as “Gan Gan” to the Cambridge children, and she leaned down to talk to her great-grandson, pointing out things of interest to the four-year-old.

His older siblings Prince George, aged eight, and seven-year-old Princess Charlotte were also animated and could be heard chatting on the balcony.

At one point George was heard to say “Oh yeah, look at that plane” as a huge Globemaster C-17, shadowed by another, flew towards them, then its engines thundered over the palace.

Louis is not the first child to cover their ears during a Buckingham Palace flypast.

At William and Kate’s wedding in 2011, little Grace van Cutsem was captured putting her hands over her ears and frowning because of the noise – just at the moment the couple kissed on the palace balcony – creating one of the best pictures of the day.

Louis also stood out on Thursday due to wearing a sailor-style outfit reminiscent of one worn by his father almost 40 years ago.

Pictures of William wearing the sailor-themed outfit show the young prince standing in front of his parents on the balcony of Buckingham Palace in 1985.

The Prince of Wales is holding a young Harry while Diana, Princess of Wales, is smiling.

Prince William, now the Duke of Cambridge, on the balcony of Buckingham Palace to watch the flypast following Trooping the Colour in 1985 (PA)PA Wire/PA Images - PA

Louis was almost outdone by his sister Charlotte, who was bouncing up and down in excitement, covered her face with her hands and also waved at the passing planes.

William and Kate chatted to their children, who also shared a few words with their relatives the Earl and Countess of Wessex and their children Lady Louise and Viscount Severn.

It was a busy day for the Cambridges’ children, who enjoyed a carriage ride to and from the Trooping the Colour ceremony.

They watched the spectacle with members of the royal family from the Duke of Wellington’s former office and Louis was seen saluting the troops on parade at one point.

When the doors of Buckingham Palace’s balcony were first opened after the Trooping the Colour ceremony ended a cheer went up from the crowds in The Mall, and the Queen led her family out followed by the Prince of Wales and Duchess of Cornwall.

They were joined by the Princess Royal and her husband Vice Admiral Sir Tim Laurence, the Duke and Duchess of Gloucester and the Duke of Kent.

As the flypast came to an end, the national anthem was played and all the royals stood still and the crowd could be heard singing God Save the Queen and cheered when it came to an end.