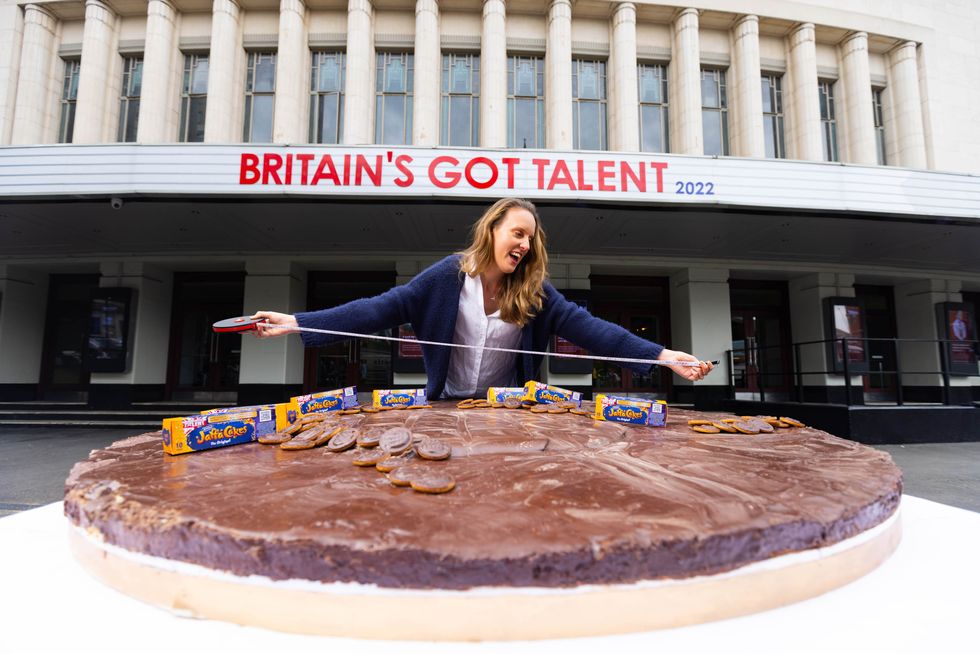 Former Great British Bake Off winner Frances Quinn has baked the world’s largest Jaffa Cake, which weighs in at 80kg.

The equivalent of more than 6,557 regular-sized Jaffa Cakes, the gigantic treat clocked in with a diameter of 175cm, beating her own Guinness World Record set in 2017.

More than 160 eggs, 8kg of dark chocolate and 15kg of orange jelly were used for the creation, cooked in celebration of the 15th anniversary of Britain’s Got Talent.

The baker worked alongside Will McMath, product development specialist, and the McVitie’s team to tackle the a process, which took more than 11 hours from start to finish at the McVitie’s innovation bakery in High Wycombe, Buckinghamshire.

The Jaffa Cake was served to guests and crew at the Britain’s Got Talent live semi-finals outside the Eventim Apollo in Hammersmith, west London, with 300 servings.

Frances said: “It was an absolute pleasure to partner with McVitie’s to beat the record I set five years ago, it was great to celebrate the 15th birthday of Britain’s Got Talent with such an iconic cake.

“I hope audiences watching the show at the live semi-finals enjoyed tucking in and celebrating the contestants this year.”

Frances won the fourth season of The Great British Bake Off in 2013.

David Titman, marketing director of McVitie’s, added: “Frances wowed us in 2013 on The Great British Bake Off, and we’ve been looking forward to working with her ever since to recreate the giant Jaffa Cake using our famous but secret McVitie’s recipe.

“We couldn’t think of a better way to pay homage to one of the UK’s best-loved talent shows celebrating 15 series on air.”

Please log in or register to upvote this article
GBBO