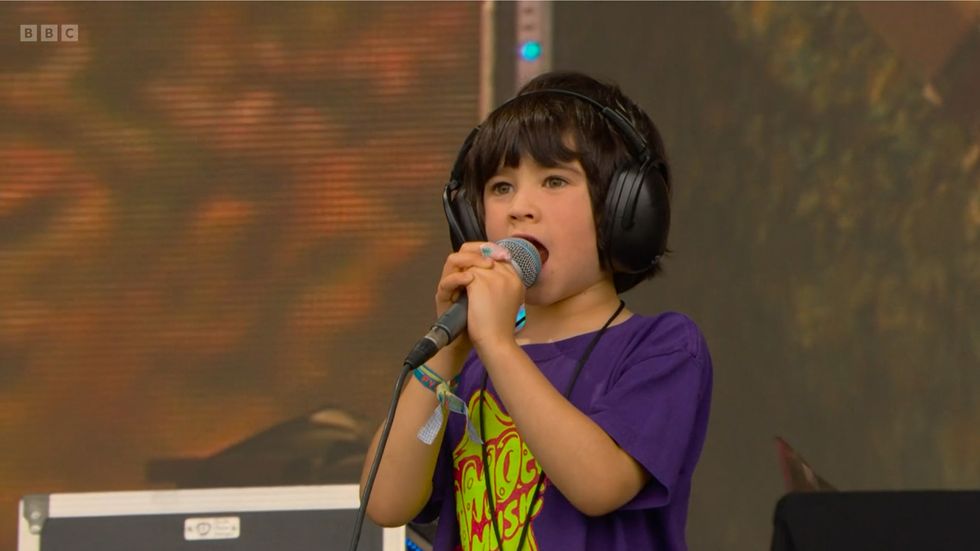 Buddy, the son of guitarist Liam Finn and grandson of frontman Neil Finn, sang along to his family’s music on the Pyramid Stage at Glastonbury (BBC/PA)
PA Media - BBC

The newest rocker, whose name was chanted by thousands in the watching crowd, was invited by the 64-year-old to introduce I Got You and pinched a microphone to sing while on the festival’s Pyramid Stage on Friday.

Young Buddy was also held up to the microphone by his father, guitarist Liam Finn, to provide vocals for 1991 single Weather With You.

After a series of squeaks to round off the set, Buddy was applauded off the stage and returned the support with a “Bye bye!” before exiting alongside his grandfather, father and uncle Elroy, who was on drums.

He also showed off some dance moves next to his grandfather, who joined British-American band Fleetwood Mac in 2018.

It is not the first time Buddy has tagged along to his family’s gigs as he also “added noise” to a Crowded House show in Scarborough, North Yorkshire, earlier this month.

Chas Frederick, who saw the band’s concert in Scarborough and is an avid fan of Neil Finn, said it was “quintessentially Glastonbury” that Buddy performed.

“That was three generations of Finn dancing on stage there and it was as quintessentially Glastonbury as you could imagine – uncool, cringey, magic,” the 48-year-old from Huddersfield told the PA news agency.

Twitter users took to the platform to commend Buddy on his performance.

“(Glastonbury) may have found its star already, got to love little Buddy, dancing with Crowded House,” one wrote.

“Neil Finn (is) superb but little Buddy, son of guitarist, stole it at the end,” another said.

Crowds will look to Billie Eilish on Friday night as the Grammy-winning singer will make history when she takes to the Pyramid Stage as Glastonbury Festival’s youngest ever solo headliner.

Please log in or register to upvote this article
Glastonbury