Passenger reunited with bus driver who saved his life 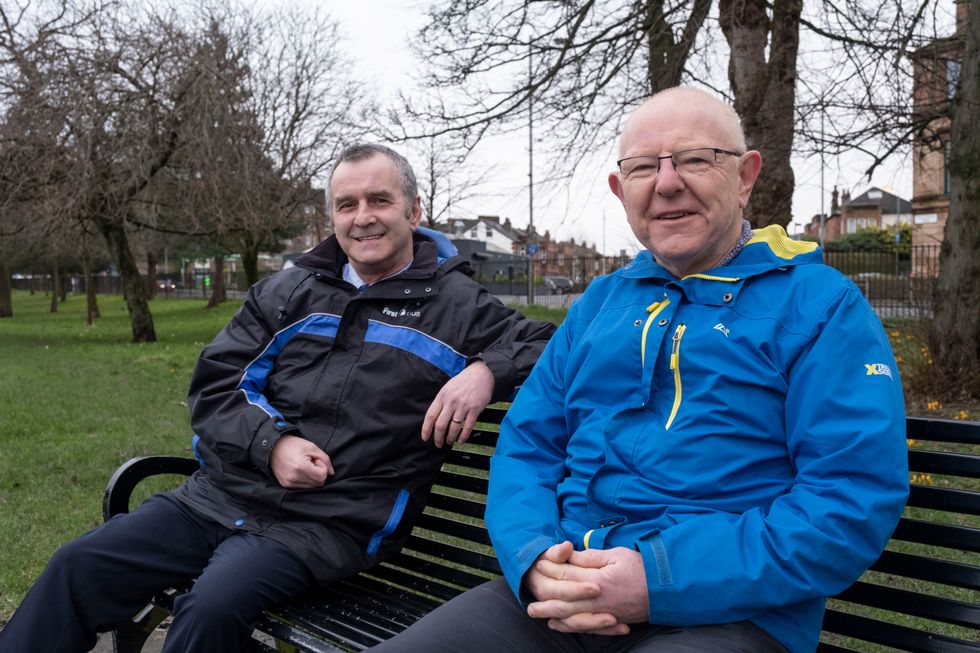 William Bell, left, saved the life of John McCann on board the number 57 bus in Glasgow (Chris James/First Bus/PA)

A Glasgow bus driver who resuscitated one of his passengers after he collapsed has been reunited with the man he saved.

William Bell was driving the 57 bus when he was informed that John McCann had fallen ill. As soon as he saw the 62-year-old, his instincts kicked in and the former lifeguard gave life-saving chest compressions for the next 35 minutes, with the help of a fellow passenger who called 999.

Mr Bell, a bus driver for 11 years, said: “It was a surreal situation, but I did what was needed. With the help of the passenger with the phone, and the call handler, it was a real team effort and we helped to save John’s life.”

To mark Random Acts of Kindness Day on Thursday, Mr McCann met the man who saved his life in April 2021.

Mr McCann delivered a thank-you card to the 59-year-old driver, complete with a heartfelt message and a gift, to the First Bus depot where Mr Bell is based.

John McCann, whose life was saved on a Glasgow bus last year by its driver (Chris James/First Bus/PA)

He said: “I had to express my gratitude, to let him know just how thankful I was to have been on his bus.

“I feel so grateful, and I’m still amazed that someone would do what William did for a complete stranger.

“What happened has really made me realise life is short, you don’t know what’s around the corner.”

Mr McCann, from the west end of the city, had jogged to the bus stop and was on his way to play tennis when he fell ill.

He was not aware that he had an atrial fibrillation, which can cause irregular and rapid heart rhythm and is quite common in older men.

When passengers on board the Pollokshaws to Glasgow bus alerted the driver, the vehicle was immediately stopped in Pollokshaws Road, allowing the driver to provide help.

Mr Bell said he alerted the depot and a passenger called for an ambulance, and he carried on speaking to Mr McCann in an effort to re-assure him.

“He was visibly in pain, moving in his chair, struggling to speak and breathe and was quickly getting worse,” Mr Bell said.

“I got him into the recovery position, at which point he was no longer speaking and his lips were turning blue. I started CPR. The whole time I was trying to stay calm and focus on keeping him alive.”

When the ambulance arrived and paramedics set up their equipment, he continued to perform CPR.

Mr McCann remembers none of this, and said he can only recall stepping on to the bus and feeling slightly dizzy.

He woke up three days later in intensive care in the city’s Queen Elizabeth University Hospital after being placed in an induced coma.

He said: “It actually took more than a week for it to properly sink in, but when it did, I just felt so relieved that I had been given a second chance. I felt so lucky.”

Mr McCann has now returned to his active lifestyle after having a cardioverter-defibrillator fitted, a device able to perform cardioversion, defibrillation and pacing of the heart which can correct most life-threatening cardiac arrhythmias.

He said: “I’m so grateful to still be here to see my family progress. My daughter is studying to be a doctor and my son has just finished an apprenticeship with a financial services company – I’m so thrilled to be living my life spending time with my family, and seeing them live theirs.

“If this had happened to me when I was running or on my way to pick up my bike later that day, I would have been alone.

“I was incredibly lucky to have been in a public place, with someone who could respond knowingly.”

Putin's bodyguards 'collect his poo in a special suitcase'

Please log in or register to upvote this article
Glasgowhealth