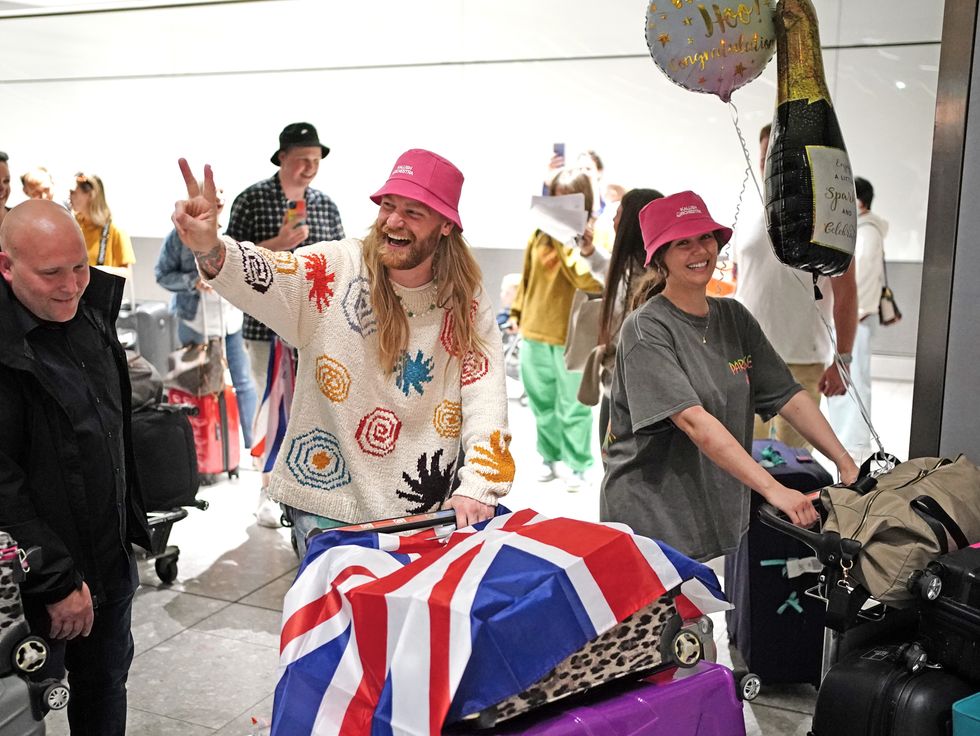 Sam Ryder said he felt “fantastic” and that he would have a family curry as soon as he arrived home as he touched down in the UK a day after coming second in the Eurovision Song Contest.

The British hopeful delighted fans at home by topping the national jury vote with 283 points, beating favourites Spain and Sweden, in the country’s best result in 20 years.

Landing at London’s Heathrow Airport on Sunday evening, the jubilant singer wore a pink Kalush Orchestra hat, celebrating the Ukrainian winners of this year’s competition which was held in Turin, Italy.

Ryder, who was carrying a champagne-shaped balloon and a Union Jack flag, said he was feeling “fantastic” and added that he had an “incredible experience, such a rewarding experience”.

Claiming he “didn’t expect” a reception, he paused to take selfies and chat to fans who had waited for his arrival on a flight from Milan.

“It’s just lovely to come home and feel that joy and love we’ve felt the whole time, though I am tired now – just want to focus on having a nice sleep tonight,” he said.

Asked the first thing he would do when he got home, Ryder laughed and answered: “Have a curry with my family.”

More than eight million people in the UK tuned in to watch Ryder’s Eurovision triumph on Saturday.

The 32-year-old TikTok star won over the audience with his uplifting pop song Space Man, dazzling in a one-piece suit encrusted with beads and pearls.

In a statement, the BBC said: “Sam’s performance was simply out of this world and we couldn’t be prouder of him, achieving the best result in 20 years for the United Kingdom at the Eurovision Song Contest, including winning the jury vote.

“Kalush Orchestra’s performance was incredible and generated a reaction both in the arena and around the globe like no other – we offer huge congratulations to Ukraine on their win.”

An average of 8.9 million people tuned in to watch the competition on BBC One, with a peak viewing figure of 10.6 million, the corporation said.

🎉 "Sam’s performance was simply out of this world and we couldn’t be prouder of him, achieving the best result in 2… https://t.co/YRu2CzFISV
— BBC Press Office (@BBC Press Office) 1652611729

This year’s competition was won by Ukraine’s folk-rap group Kalush Orchestra with their song Stefania.

“Next year Ukraine will host Eurovision!

“For the third time in its history. And I believe – not for the last time.”

Martin Osterdahl, Eurovision’s executive supervisor, said in a statement that the organisation’s attention has turned to next year’s competition and its “unique challenges”.

He was selected in a new collaboration between the BBC and global music management company TaP Music, which also revamped the promotional campaign.

The new strategy included ensuring Ryder’s single, Space Man, got played on BBC Radio 1 instead of Radio 2, and targeting smaller countries such as San Marino, Serbia, Croatia and Malta, which have the same voting powers as larger countries such as Germany.

In his first series of posts to Twitter since the competition, Ryder said: “Still up in Space, Man! Thank you all for blazing with love, positivity and kindness throughout this wild and euphoric experience.

“We completely felt your support and we so deeply appreciated it.

“Huge love to Kalush Orchestra for bringing it home for glorious Ukraine!!!

“Couldn’t be happier right now and I can’t wait to hug my grandad!!”