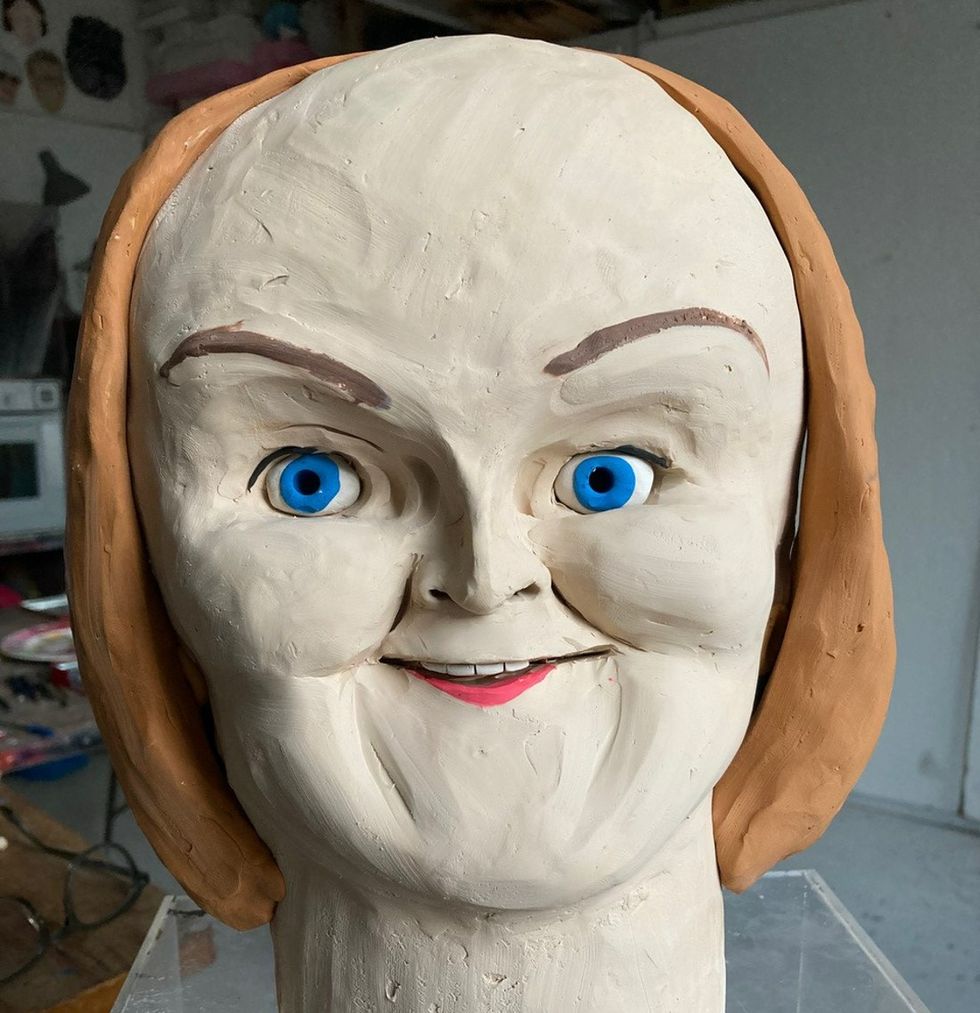 An artist who created a sculpture of Liz Truss which went viral on the day it was announced she would become prime minister, has said that he intended his work to showcase her character.

Wilfrid Wood, 53, who lives in Hackney in London and was involved with the satirical TV show Spitting Image from the 1980s and 1990s, made a plasticine sculpture of Ms Truss, which took around a day to complete.

According to Mr Wood some of the most striking features on the bust of the outgoing Foreign Secretary, who won 54.7% of the vote in Monday’s Tory leadership race, include a forehead which “stands out” and a “thick neck”.

The sculpture had Twitter users in hysterics, with more than 11,000 likes and comments likening the art to infamous horror character Chucky.

Mr Wood told the PA news agency that the “political shenanigans” surrounding the Conservative leadership led to him creating the artwork, but that he actually made Ms Truss’s competitor Rishi Sunak first.

“I’d already done one on Rishi Sunak. I thought it was about time I gave Liz a go,” he said.

“I tried to draw her and it didn’t feel like it would come out very successfully, so a sculpture seemed like another avenue to take.”

He added that Ms Truss was harder to make as Mr Sunak “has got much bolder features”, which include big ears and a “sticking out nose”.

“It is hard to say what was the hardest to sculpt. It’s more like what is the easiest? What stands out?” he said.

“Her forehead stands out, her cheekbones, her eyebrows are often very, very high on her forehead, which is quite big anyway and then she’s got quite a small mouth and quite a thick neck.

“What I do is make loads of drawings so I can get a sense of what they’re like and then it’s easier to sculpt, bearing those things in mind.”

Mr Wood said that the process involved “tiny moments of breakthroughs” and moments where you think, “I’m not sure this really got her vibe”.

“And at the end, you kind of slightly hope for the best, but it’s usually good to walk away from it for about an hour or so and then suddenly you think, the forehead’s got to be bigger or something like that,” he added.

He said reaction to his pieces is “always nice”.

“It’s always nice when people are amused by it,” he added.

Describing himself as being very “neutral about politics”, he said he intended the sculpture to showcase Ms Truss’s character.

Mr Wood started making sculptures in the mid-1990s and has gone on to depict famous figures including Sir Paul McCartney. He said the most common thing people link him with is Spitting Image, where he worked as a headbuilder making “eyeballs” and “blinks”.

“When I do things like this, it is harking back to my days in the 1990s working at Spitting Image,” he said.

I always loved what the sculptors were doing, sculpting people like Margaret Thatcher, and I always longed to be a part of that so gradually I taught myself in a way how to do that sort of thing

“It was absolutely hilarious and such good fun. Spitting Image really changed my life.

“I always loved what the sculptors were doing, sculpting people like Margaret Thatcher, and I always longed to be a part of that so gradually I taught myself in a way how to do that sort of thing.”

Tony Blair's words about the NHS crisis 26 years ago resurface