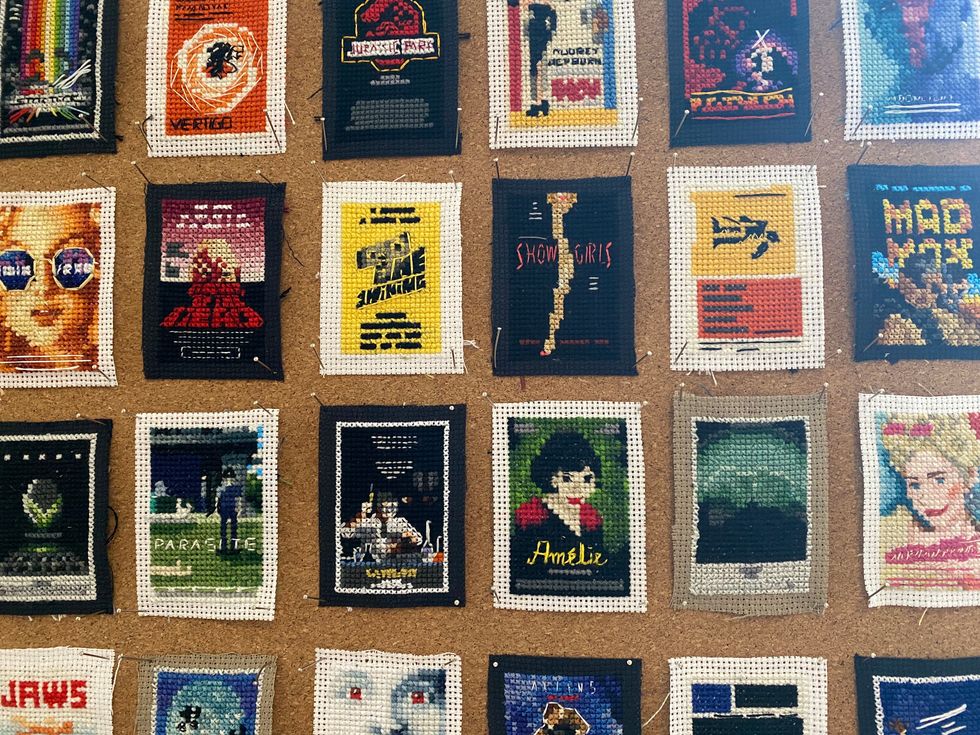 A self-professed “movie buff” has turned her love of the cinema into a side passion by creating mini cross-stitch versions of famous film posters.

Victoria McNally, 32, a copywriter who lives in Brooklyn, New York, told the PA news agency that she began cross-stitching when at school, spurred on by her mother’s love of arts and crafts.

“My mum was really crafty when I was growing up … so I probably learned it from her around elementary school or middle school and I would come back to it every once in a while if I was making a gift for somebody or if I found a pattern that I thought was really interesting and I got back into it in a big way, partially because of the pandemic,” she said.

Since her younger years, the self-confessed “movie buff” has turned her cross-stitch attention to making mini movie posters and has joked that choosing which poster to design is determined by “taking off my glasses, squinting and still knowing what the poster is”, as she is near-sighted.

“We’re big movie buffs in our apartment. My husband (Andy, 32) is a huge movie person so we go all the time, so that was kind of already on the brain and it kind of went from there,” she added.

“And there’s also a lot of conversation about certain types of movie posters that have become iconic over time, so that’s the stuff I mostly look for.”

Videos of Ms McNally in action can be found on TikTok and she has cited ‘Cross stitch by Narnie’ and ‘Subversive Cross Stitch’ as sources of inspiration for her work.

“I think a lot of horror posters are more willing to take risks and be kind of striking because the idea is that they want to get you in the door to see the movie,” she said.

“They tend to be more visually stimulating stuff, which I think really helps.”

Other movie posters in Ms McNally’s growing collection include the Steven Spielberg classics Jaws (1975), ET (1982) and Jurassic Park (1993) and the Oscar-winning Titanic (1997) from James Cameron.

The poster for Titanic in cross-stitch (Victoria McNally/PA)

A key reason behind the movie poster idea was to highlight the work that goes into designing marketing material for movies.

“I think it’s a great way to think about the actual art and craft that goes into what is essentially a marketing material because that tends to not get talked about as much as the actual movie itself,” she said.

“And a lot of times there is an interesting story behind it or it is itself a piece of art and there’s a lot of work that goes into not making it bad.”

The time it takes to make the cross-stitch creation varies from poster to poster, three to four hours being the average, with the design process taking longer.

Ms McNally has admitted, however, that the process has not always been straightforward.

Silence of the Lambs in progress (Victoria McNally/PA)

“I went through six or seven iterations of Silence of the Lambs because I was like this does not look enough like Jodie Foster and I eventually had to decide – it’s close enough.”

For those who are interested in cross-stitching, Ms McNally said to make getting a magnet for your needles a priority, so they do not “end up everywhere”.

“I’ve definitely woken up and found a needle underneath me more than once,” she added.

Ms McNally’s work and links to her stores can be found here: https://www.needlepopcrafts.com/