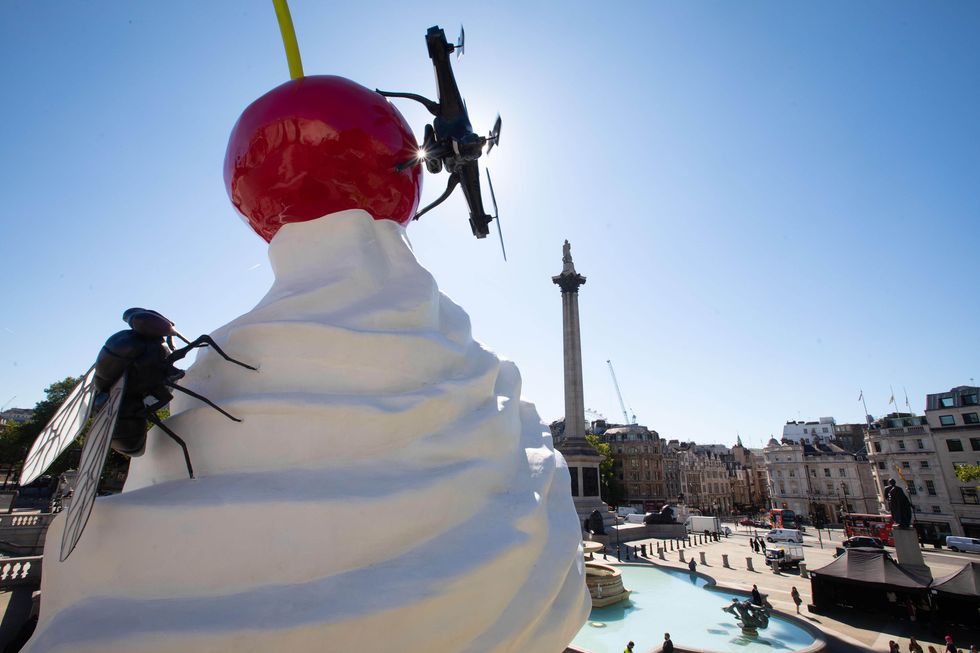 The artist who installed the “transformative” Fourth Plinth sculpture in London’s Trafalgar Square has been shortlisted for this year’s Turner Prize.

Heather Phillipson’s The End features a whirl of whipped cream topped with a cherry, a drone and a fly.

The British artist, 43, was also nominated for her solo immersive exhibition at Tate Britain titled Rupture No 1: Blowtorching The Bitten Peach, which the jury described as “overwhelming” following lockdown.

The four-strong shortlist features Sin Wai Kin, 31, nominated for their ability to bring fantasy to life through storytelling, drawing on their own experience of existing between binary categories.

In their film, A Dream Of Wholeness In Parts, in which traditional Chinese philosophy and dramaturgy intersects with contemporary drag, Sin play’s three hybrid characters.

Also in the running is Ingrid Pollard, whose nominated exhibition Carbon Slowly Turning questions our relationship with the natural world.

The 69-year-old was commended for uncovering stories and histories hidden in plain sight in her work over the decades, particularly focusing on race and the concept of other.

The final shortlisted artist is Veronica Ryan, praised for her new body of work Along A Spectrum which explores perception, history and personal narratives, as well as the psychological impact of the Covid-19 pandemic.

Ryan, 66, was also praised for her Hackney Windrush Art Commission in London, with the jury struck by the sensuality and tactility of her sculptures.

Alex Farquharson, director of Tate Britain and co-chair of the Turner Prize jury, said: “Art has provided much-needed enjoyment and escape over the past year but it has also helped to reconnect us with each other and the world around us, as the practices of the four shortlisted artists variously exemplify.”

Helen Legg, director of Tate Liverpool and co-chair of the Turner Prize jury, said: “The jury has travelled the length and breadth of the country, taking advantage of the easing of lockdown to enjoy the explosion of creativity that has emerged from the pandemic.

“The result is a diverse group of artists, each with a singular vision, who impressed the judges with the intensity of their presentations, while also dealing with important issues facing our society today.”

This year marks the Turner Prize’s return to Liverpool for the first time in 15 years.

The winner will be announced at a ceremony in December and an exhibition of all the shortlisted artists work will be held at the Tate Liverpool from October 20 2022 to March 19 2023.

The Turner Prize is one of the world’s best-known prizes for the visual arts.

Established in 1984, the prize is named after the radical British painter JMW Turner and the winner is awarded £25,000, with £10,000 going to each of the others shortlisted.

Please log in or register to upvote this article
Tate Britain