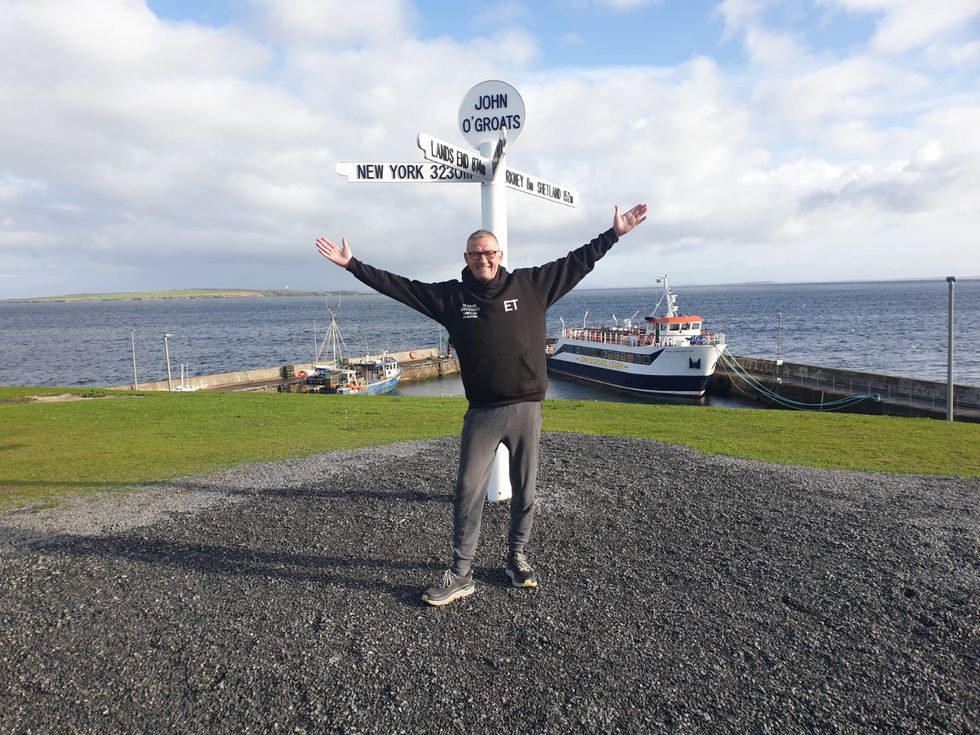 An Army veteran inspired by Captain Sir Tom Moore has embarked on an 870-mile run in just 17 days to raise money for charity.

Eddie Towler, from Bradford, West Yorkshire, set off on Friday from John o’Groats in Scotland and aims to run an average of 55 miles a day until he reaches Land’s End in Cornwall on May 29.

Mr Towler’s mission is in aid of three causes – the MS Society, the Motor Neurone Disease (MND) Association and ABF The Soldiers’ Charity – but he was first encouraged to challenge himself when he saw Sir Tom walking 100 laps of his garden before his 100th birthday during the first national lockdown, which raised a total of £38.9 million for the NHS.

Mr Towler, 54, joined the Armed Forces in 1984 and spent 12 years in the 1st Battalion Duke of Wellington Regiment – the same as Sir Tom.

“At his age to go and do what he did, it just shows the true Yorkshire grit of being a Duke and a Yorkshireman,” Mr Towler told the PA news agency.

Mr Towler has been training since October for the task, even going for a four-hour run on Christmas Day (Eddie Towler/PA)

“We all felt the pride of the regiment.

“I then decided, if Tom can do something, I will challenge myself… You only have one life, so it’s a case of making the best of it and trying to make as many memories as possible.”

A friend from the Army is living with MS and made Mr Towler aware that there are five other soldiers in their regiment with MS as well.

“Looking at the stats on the MS Society website, one in 500 should have MS within the population of Britain,” he explained.

“But unfortunately there’s six guys in a pool of 250 which is astronomical, so I’m running for them.”

Mr Towler is also fundraising for the MND Association after losing a friend in January 2022 with whom he worked at Lancashire Police following his time in the armed forces.

He has been training since October for the task – including a four-hour run on Christmas Day – and praised the “massive team effort” from fellow veterans who will help to keep Mr Towler fed and watered on the journey.

“The support team is made up of my ex-corporals,” he explained.

“It may be me at the front but behind me, I’ve got a real good support team.

“It’s just all about getting that money in for the charities (and) if we can do that, that will absolutely be the icing on the cake.”

Mr Towler will be wearing a tracker for those at home to follow and check when he is passing by, as well as providing a live feed to document the challenge on www.eddietowler.com.

“People can then feel part of it, they can watch the progress,” he said.

“They can watch it live, they can watch the videos and if they do want to get involved, the more the merrier.”

He described himself as “a bit bouncy, an effervescent character”.

“Some people I know have scrunched their face up and said, ‘You’re too old for that, you’re never going to do it,’ but they’ve been the best coaches I could have had,” Mr Towler said.

“Because they’re the people that when the going gets tough, I’ll just think of them, with their thinking that I’m not going to do it, and that’ll spur me on to push through and get to the end.

“And as the motto of the Duke’s is Virtutis Fortuna Comes, which is ‘fortune favours the brave,’ so hopefully I can do it.”

To find out more about Mr Towler’s fundraiser, go to: www.justgiving.com/crowdfunding/Edwin-towler

Please log in or register to upvote this article
charityFundraiserMNDMS SocietyUplifting