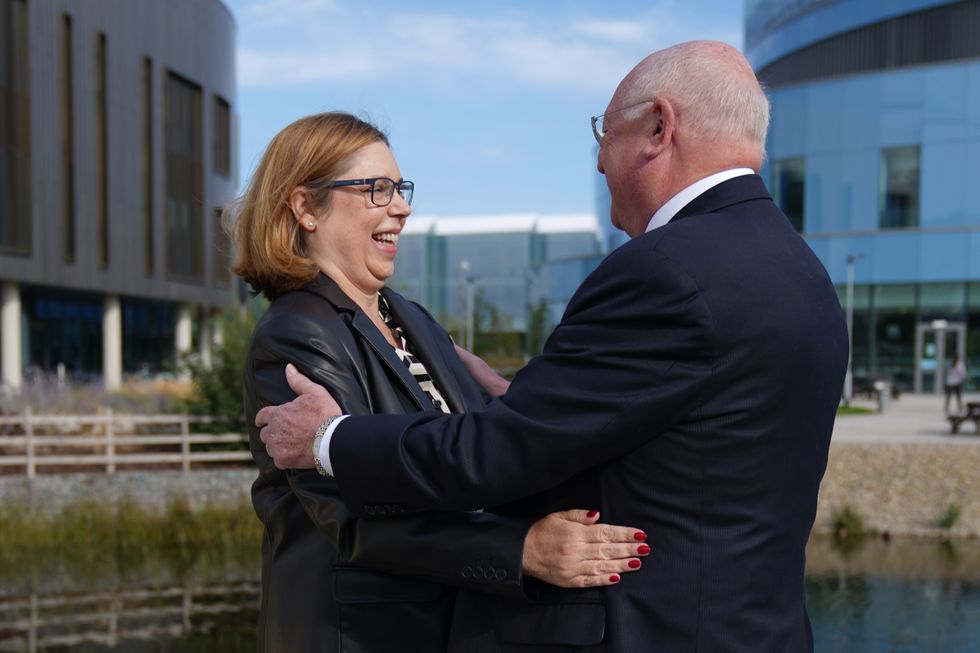 A woman has been reunited with the surgeon who carried out her lifesaving heart and lung transplant operation 35 years ago.

Katie Mitchell, of Sidcup in Kent, was so breathless that she could barely climb the stairs before she had the operation in 1987, when she was a 15-year-old schoolgirl.

She had been diagnosed at age 11, in 1983, with Eisenmenger Syndrome, where there is irregular blood flow in the heart and lungs, which leads to heart failure and irreversible lung damage.

At first it had been thought she might be asthmatic.

At the time Ms Mitchell was diagnosed with the heart disease there was no treatment for it and most patients died before the age of 30.

This changed in 1984 when a team at the then Papworth Hospital, in Cambridgeshire, performed Europe’s first successful heart-lung transplant.

When Ms Mitchell’s operation was performed in 1987 she was one of the youngest patients to have the operation, and she is now among the longest survivors.

Ms Mitchell, 50, who until recently worked for an insurance company and is currently renovating her house, said she owed her life to medics and to her donor and their family.

Professor John Wallwork, 76, was her surgeon and she was reunited with him at Royal Papworth Hospital in Cambridge on Thursday.

Ms Mitchell said: “Without him I wouldn’t be here.”

She also hailed the medical team, and donors and donor families, adding: “None of this would be possible without them.”

Ms Mitchell, who lives with her IT worker husband Lex James, 57, said that the time of her operation was “probably very worrying for my parents, looking back”, but that she was a child at the time.

“I knew I was on the waiting list,” she said. “I didn’t ever think it wouldn’t happen.”

She said that before her operation she “couldn’t really even walk upstairs or downstairs in the house”.

“If I went up to bed that was it and it would take me 20 minutes or half an hour to get there,” said Ms Mitchell.

“It was quite bad at the end.”

Describing the change from before the operation to after, she said: “I was so breathless and so blue from not getting any oxygen that literally as soon as I woke up from the surgery I was very pink and I could breathe and I remember thinking how easy it was to breathe compared to the day before.

“It made such a big difference.”

She said it is now sometimes “hard to remember that I did all that”, and “other times it seems really close”.

“But I just keep taking the tablets I’m told to take and just keep going,” she said.

“I always think it was done so I could live a life so I just try to do that rather than think of myself as a victim or a patient.

“It’s such a change.

“I’ve always worked full-time and just got on with life like anyone else.

“I’ve travelled, got married, got two dogs. Just tried to live a normal life really, not limit myself.”

Prof Wallwork, now chairman of Royal Papworth Hospital, said that at the time of the operation there was not the experience to predict how long people may live for.

Asked what it was like to be reunited with Ms Mitchell 35 years on, he said: “She was very blue and she was coming towards the end of her life at the age of 15.

“To see her now this many years later having led a good life, not just having survived, is wonderful.”

Ms Mitchell’s friend Samantha Hardwick, 50, has known her all her life and said it was a “very difficult time” before the operation.

The cyber-security project manager, of Chesterfield, Derbyshire, said: “We’d got to the point where she wasn’t really able to go out or do anything and if she did it was exhausting for her.

“I can remember being at her home with her and when she needed to go upstairs she had to do three steps sit down as she couldn’t do it in one go.

“And once she got upstairs that was it she wasn’t coming back down again for the rest of the day as it was too exhausting.

“Watching that decline was very difficult, we were both 15 at the time.”

Reflecting on how things turned out, she said: “It’s awesome, isn’t it.

“I don’t think there are even words in the dictionary to describe it.

“I’ve had 35 years of my friend that we wouldn’t otherwise have had.

“None of that would have been possible without the donor family, John and his team and Katie being brave enough to take it on, though arguably she didn’t have much choice.”

In addition to her heart-lung transplant at Papworth in 1987, Ms Mitchell has also had two kidney transplants from deceased donors, in 1994 and 2015, at a hospital in London.

NHS doctors use reanimated hearts to save lives of six children