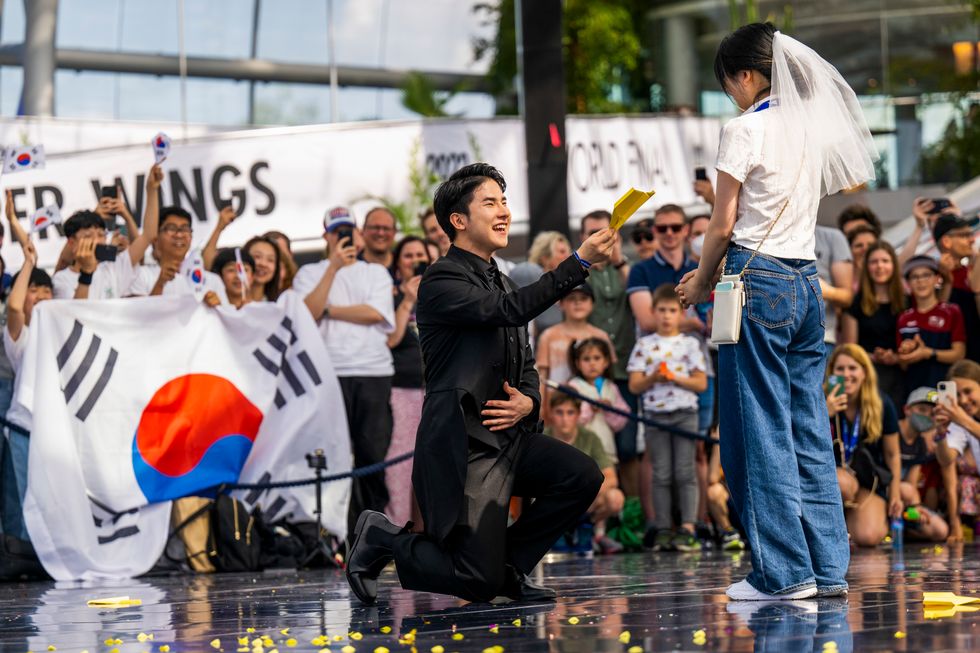 Aerobatics winner Seunghoon Lee, from South Korea, proposed to his girlfriend after being crowned the champion. (Red Bull Paper Wings/PA)

A South Korea teacher proposed to his girlfriend in front of the crowd after winning the world’s biggest paper plane-throwing competition.

Seunghoon Lee got down on one knee and asked his girlfriend to marry him after he was crowned the world’s greatest aerobatic player at the Red Bull Paper Wings world super final in Salzburg, Austria, on May 14.

Aerobatics winner Seunghoon Lee, from South Korea, proposed to his girlfriend after being crowned the champion (Red Bull Paper Wings/PA)

The science teacher, who was dressed in a black three-piece suit, invited his girlfriend in front of the packed crowd and asked her to marry him using a gold paper plane, to which she said yes.

Mr Lee competed in the aerobatics category and had 60 seconds to perform with a routine with a paper plane in front of three judges, including aviation star Dario Costa of Italy, whose record-setting “Tunnel Pass” flight went viral last year.

After the event, Mr Lee said: “I teach science classes in Korea and I use many paper planes – it’s been seven years since I’ve been teaching about paper planes.

“Today I was able to perform and show that I can be the world’s greatest aerobatic player.

“I’ve been practising my presentation for one year.

“I asked my girlfriend to come to the world final with me, and this morning I told her that if I won, I would propose to her, so it all worked out.”

The national finalists participating at the sixth world final at Hangar-7 in Salzburg were the elite of more than 61,000 hopefuls from 60 countries who had taken part in more than 500 qualifier events.

Competitors were challenged to come up with the best aerodynamic designs and techniques for their paper planes in three categories: longest distance, longest airtime, and aerobatics.

Meanwhile, Yicheng Sun, 32, represented Great Britain in the longest distance category and came in second place after he threw his paper plane a distance of 57.07 metres.

“It is amazing, I can’t believe it,” Mr Sun told the PA news agency.

“When the competition starts, it’s really tough but I decided to take a risk and I ended up with (the silver trophy).”

Firefighters free toddler after toilet seat gets stuck around neck

Please log in or register to upvote this article
AustriaPA Ready