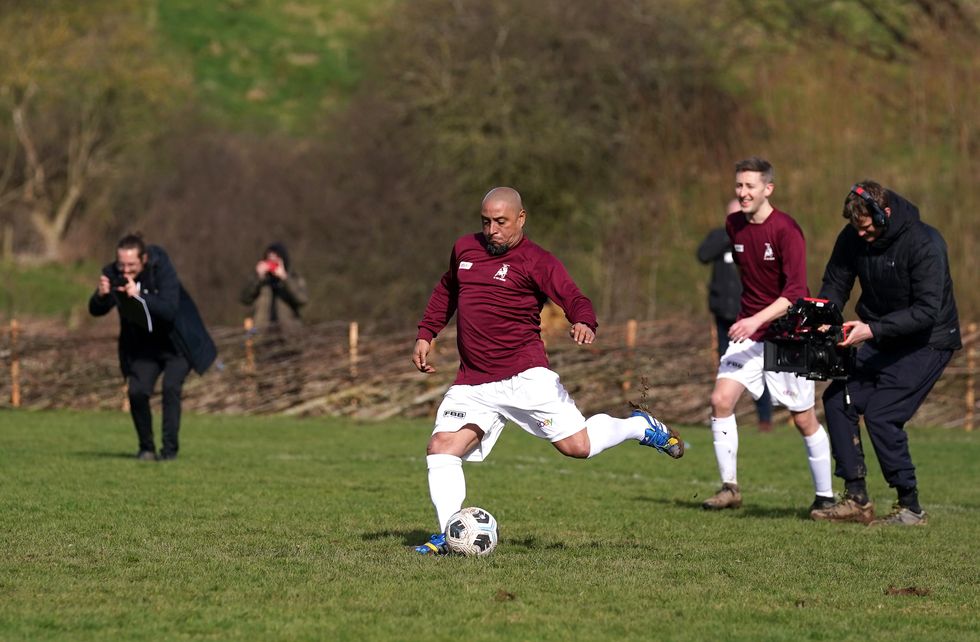 Roberto Carlos made an unlikely return to action on Friday as the World Cup-winning former Brazil defender turned out for a Shropshire-based Sunday league team.

Shrewsbury side Bull in the Barne United, named after a local pub, had the 48-year-old ex-Real Madrid full-back making an appearance for them after winning a charity ‘Dream Transfer’ raffle on eBay in January.

He showed some nice touches after coming off the bench in the first half, and subsequently came back on to score a penalty late on as Bull in the Barne were beaten 4-3 by fellow Shrewsbury and District Sunday League Division 1 team Harlescott Rangers at Hanwood Village Hall Recreation Centre.

Roberto Carlos, who won over 100 caps and the 2002 World Cup with Brazil and spent 11 seasons with Real Madrid that included three Champions League triumphs, told the PA news agency after the game: “I’m very happy to be back playing.

“Football is amazing and even though I’ve had the opportunity to play with the biggest names in world football, playing here is very enjoyable. Always good to score a goal!

“A lot of people don’t realise that even though I played with some of the biggest clubs and best players in the world I started ‘here’ in Brazil, at 13, 14 years old. It brings back great memories for me playing on pitches like this.”

Roberto Carlos had seen some of the local area in the build-up to the match, and was set to join the players at the pub afterwards.

And he said: “I really enjoyed it – I also come from a small-town background, so I like the vibe in the area. I had a nice day here yesterday in the area, so I’ve had time to get to know it.

“It’s just amazing that football gives you these opportunities to be able to meet new people, new cultures, different places. I certainly haven’t been somewhere like this before.”

Money raised from the raffle, open to anyone associated with a Sunday league team and costing £5 to enter, has gone to Football Beyond Borders, a charity that helps disadvantaged young people in the community.

Roberto Carlos added: “It’s a fantastic initiative. Any time there is a charity element involved in a project it’s very important for me, and what FBB do is fantastic.”

Bull in the Barne manager and goalkeeper Ed Speller, who made the raffle entry for the team, said: “We can safely say it’s the best moment of our footballing careers and it’s been one of the best days of our lives probably.

“It’s been amazing, the whole experience from start to finish. You have to be realistic and say he won’t be able to banana free-kick from 35 yards out maybe any more, but the penalty… that was top-quality, bottom-corner.

“Even any touch he had, every pass was directly to someone and on this pitch, that’s not easy, we’re struggling throughout the game to do that. He’s just a class player.”

Defender Liam Turrall said: “It’s still feeling surreal, to see him here – it’s almost like this mythical creature almost. You’ve seen him on TV, you’ve seen him in sticker books when you were a kid. So to see him here in the flesh is a really surreal experience that I’m sure will sink in later.”

That game took place last month as Aluko came off the bench in Pevensey and Westham’s friendly loss to Ringmer AFC.