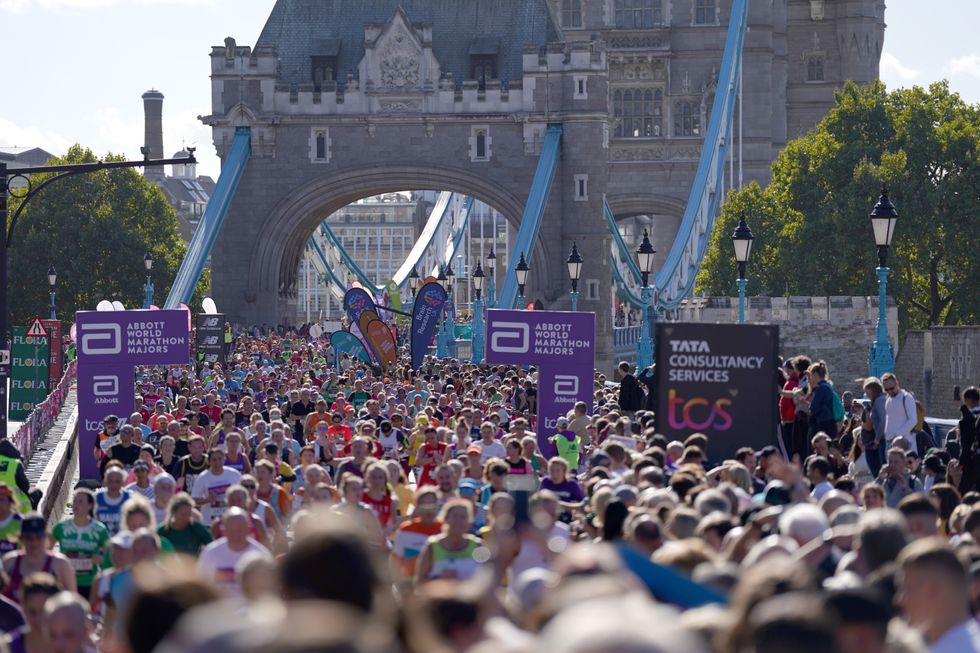 A day of fun, fast times and emotional challenges has been had by the thousands of runners who have taken part in the London Marathon.

More than 40,000 people set off for the annual 26.2-mile run from Blackheath in south-east London to the finish line on The Mall.

Elite Swiss athletes Marcel Hug and Catherine Debrunner had already claimed victory in their wheelchair races in new course records by the time most of the runners had set off.

Cheering crowds lined the streets to help spur on the mass of runners, including some in colourful costumes and others who were undertaking a personal challenge.

Scott, who later helped out by handing drinks to runners at the 23-mile mark, said: “I completed the mini-marathon when I was 14, and I think being here today has all but signed myself up for it… I better get training as I haven’t done anything for two months since retiring.”

Anoosheh Ashoori, 68, who was released from Evin prison in the Iranian capital alongside Nazanin Zaghari-Ratcliffe in April, described running in the marathon as a “dream come true”.

Mr Ashoori, who was jailed for five years in Tehran, said he started preparing for the marathon while imprisoned in what he called “the valley of hell”.

He ran the marathon for Amnesty International UK and also dedicated his run to the anti-government protests in Iran which were sparked by the death of 22-year-old Mahsa Amini in custody after being detained by Iranian morality police because her headscarf was allegedly too loose.

During his run, he told the BBC’s London Marathon programme that it is a “dream come true, that is what is happening here”.

He said: “It has been fantastic. I am also dedicating this run to the women’s movement in Iran. I am expressing my excitement and goals to that movement. I hope that movement is going to win and bring this tyrannical regime down to its knees.”

More than £1 billion has been raised for charity since the first London Marathon was held on March 29 1981 and the millionth finisher in the history of the event crossed the line in 2016.

Harry Judd, drummer for the band McFly, who ran for the Children’s Trust, said he was pleased with his finishing time of around three hours, 14 minutes but had been left with “bleeding nipples and hot blisters on the feet”.

He told the BBC: “Honestly, it does not matter how fast you run, it is just about getting involved. It is a huge challenge with thousands of people running for charity. It is honestly one of the best things I have ever done.”

It was also the first time that assisted wheelchair users were allowed on the course as part of an effort by organisers to make the event more inclusive.

It meant that Team Kerr – a running family from Co Down, Northern Ireland, could take part.

David and Sandra Kerr helped their son Aaron around the course where they were “overwhelmed” by the support they received and the “quite amazing” atmosphere.

Mr Kerr told the BBC: “It has been seven years we have waited to do this. It is just phenomenal. This is all we wanted, just to be a part and in the middle of it and with no special treatment.

“We are just alongside everybody else, enjoying a fantastic day out with people who love doing the same thing as us.”

Racers and spectators faced the challenges of a train strike on Saturday which threatened to hinder their arrival at the event.

Organisers had advised people to plan ahead, but said they were “very grateful” to Southeastern and Network Rail for their help in ensuring that train services from central London to the starting point on Sunday morning ran as planned.

Race director Hugh Brasher said “people have been inconvenienced”, with some possibly having to book hotel rooms and to alter their travel plans.

He said: “They might have had to share cars or book coaches but people are pretty resourceful. They just want to get this amazing feeling that you get from running the London Marathon.”

Former heavyweight champion Anthony Joshua, who was at Lucozade Sport’s mile 23 marker handing out drinks to the runners, said: “It’s been amazing to be a fan for the day.

“Supporting the runners has given them that last bit of motivation to get over the finishing line – even though they’re feeling it.”

The top runners stormed to victory in quick times, including Kenya’s Amos Kipruto, who won the elite men’s title in 2:04:38 in his debut on the course, and Ethiopia’s 23-year-old Yalemzerf Yehualaw, who clocked 2:17:25 and became the youngest ever female winner of the London Marathon.

Sunday’s TCS London Marathon marks the third time it has taken place in October after it was moved due to the Covid-19 pandemic.

Organisers said the race will be returning to its traditional spring slot in 2023, with the ballot for places to run on April 23 open until 9pm on October 7.

Please log in or register to upvote this article
charityLondon Marathon