Landmark 600th race beckons for woman, 77, who has run most London Marathons 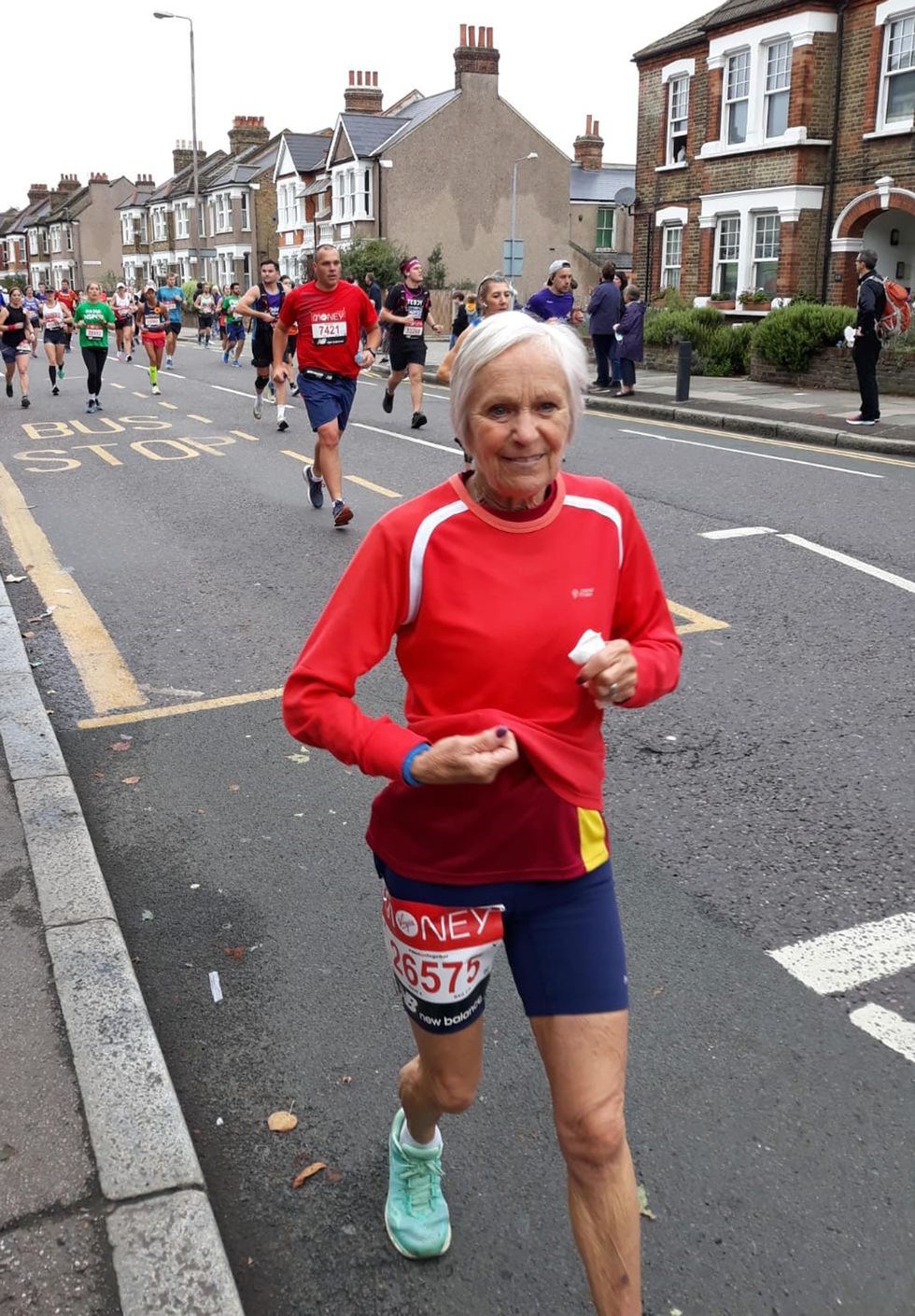 A runner who has taken part in more London Marathons than any other woman plans to complete her 600th marathon later this year.

Gina Little, 77, who lives in Greenwich, has run the London event 37 times since she was inspired after watching the second race pass her road in 1982.

She has chosen to mark her 600th marathon at Richmond Runfest on September 11 as a celebration with her club, Plumstead Runners, all dressed in special T-shirts.

“I wanted my running club to be part of it. We have got a coach going up,” she told the PA news agency.

Mrs Little said she has always been active and was inspired to try a marathon after seeing the London runners go past.

I ran with my friend all the way. We just enjoyed the crowds, took our time, went in pubs to use the loos. No Portaloos back then

“I didn’t know anything about the first one. I only saw the second one as it goes past the top of my road,” she said.

“I saw the French guy with a tray and a bottle of wine and a glass, and thought ‘how can he do that?'”

Mrs Little said she was very nervous before her first London Marathon: “I ran with my friend all the way. We just enjoyed the crowds, took our time, went in pubs to use the loos. No Portaloos back then.

“Just tried to take it all in, crossing Westminster Bridge at the end of the marathon was very emotional with lots of tears.”

She added: “We were only going to do one. Then I got the bug, I suppose.”

She recorded a personal best of three hours and 26 minutes in 1993 and now usually finishes in four hours and 30-40 minutes.

Her achievement was recently rewarded with a Spirit of the London Marathon award and Mrs Little said she was “gobsmacked” to get the accolade, adding: “I have been quite lucky as I have got in as good for my age.”

While many hope for an elusive ballot place for the heavily over-subscribed London Marathon or run for charity, faster runners in each age category can apply for a good for age place.

She added: “I have always been involved in it.

“When I didn’t run I have helped at a drinks station. One time I helped at the elite station.”

She has also run the Berlin Marathon more than 30 times but it has fallen close to the London race since the latter was moved to October due to the Covid-19 pandemic. It is expected to return to its usual spring slot in 2023.

“Last year I had to do Berlin one week and London the next week,” she said.

“This year it’s the same. I have also got Chicago the following week. Chicago is always October.

“Chicago is my sixth major, so I obviously want to do that.”

There is a special medal for those who complete all six of the Abbott World Marathon Majors – Tokyo, Boston, London, Berlin, Chicago and New York.

The married mother of two and grandmother of five also belongs to the 100 marathon worldwide club who meet at races and wear special vests.

Mrs Little said she has met interesting people through running, adding: “I never go to a race where I don’t know someone, which is really nice.”

Running marathons and ultramarathons has taken her to 46 countries and 22 islands, including places like Hawaii and New Zealand.

“I’ve seen the world and seen the country,” she said.

She played down her achievements, saying: “I’m not very fast. When you do 10k you have to run hard all the way. I just like to be comfortable.”

Mrs Little, who is 5ft (1.5 metres) tall, said being light and “not very big” has been an advantage for running and avoiding injury.

“Because I do so many marathons, I don’t have to do so much training,” she said.

“I don’t do that very many long runs because I do so many marathons.”

Asked if she ever struggles to complete 26.2 miles, Mrs Little, who is retired after working for Greenwich Council for 36 years, said: “I have always managed to get through. People just expect me to do it really.”

But the runner postponed her 599th marathon, which had been due to take place at Hever Castle, in Kent, on Sunday July 3, to avoid aggravating a problem with her foot. She hopes to find another marathon to run before September 11.

Her advice for those training for their first TCS London Marathon on October 2 is “just not to add too many miles too quickly. If you do 10 one week, then next do 11. And have a rest in between long runs”.

“Enter some half marathons or something to know what it’s like running with people, it’s totally different running in a race than running on your own.”

She said the crowd noise may help in the final stages when you are getting tired but added: “I don’t race wearing my name. Everyone’s calling your name and you don’t know if you know them or not.

“If someone calls my name, I know it’s someone I know.

“Just relax and enjoy it, you might never do it again. You might not be as lucky as me. It’s just the luck of the draw.”

Please log in or register to upvote this article
GreenwichLondon MarathonMarathonRunning