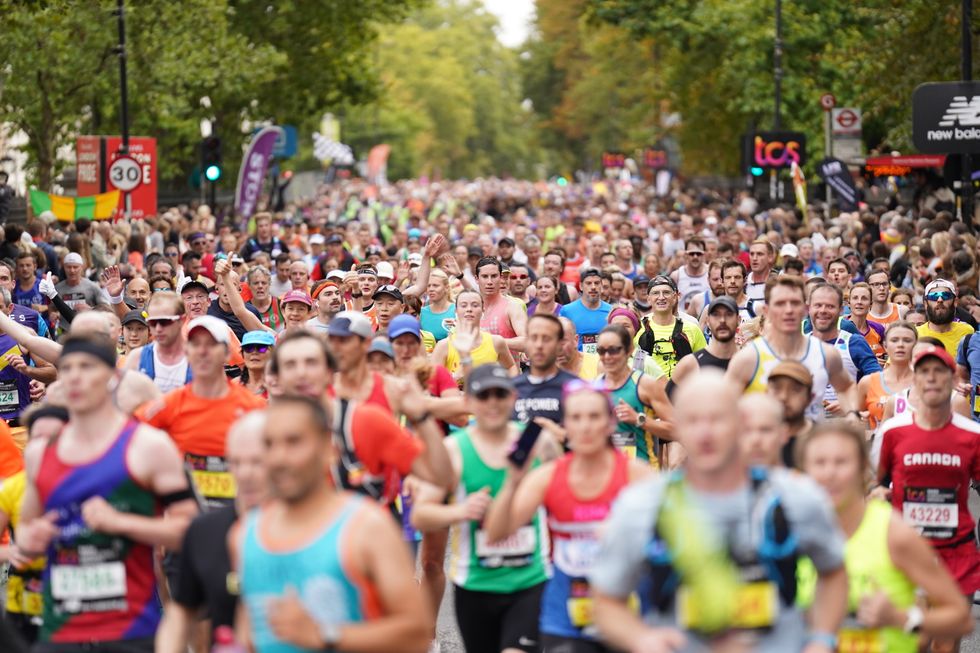 Thousand of runners are pounding the pavements of the capital as they take part in the London Marathon.

Up to 50,000 people set off on the eagerly-awaited 26.2-mile race from Blackheath in south-east London to the finish line on The Mall.

Elite athletes – including Marcel Hug and Catherine Debrunner – had already claimed victory in the wheelchair races on Sunday morning by the time most of those taking part began their runs in front of cheering crowds.

They included charity fun runners in colourful costumes, people undertaking a personal challenge and those wanting the chance to enjoy the incredible atmosphere which London always offers.

Among those taking part is Rob Duncombe, chief pharmacist at The Royal Marsden NHS Foundation Trust, who is running for charity wearing an “absolutely stunning” 8ft tall oak tree costume.

The 54-year-old, from Chelmsford, Essex, who is running on behalf of The Royal Marsden Cancer Charity, is hoping to beat the Guinness World Record for the fastest marathon dressed as a tree (male), which stands at four hours, five minutes and six seconds.

Actor Stephen Mangan, who is running for Marie Curie UK, joked that “for reasons I’ve yet to fully understand I’m running the London Marathon” as he urged people to sponsor him to help raise money for “an incredible charity”.

Met Office meteorologist Steven Keates predicted that the day will be “cloudy with outbreaks of rain, perhaps on the heavy side at times, during the morning”, with showers pulling away to the south through the early afternoon.

He added that “winds look mostly light and variable” and temperatures will start at 11C at around dawn “rising to 13C/14C for the race start, peaking around 17C mid-afternoon”.

Mr Keates said: “Spectators may need to bring an umbrella, as the weather may not be the best when standing around.”

Both runners and spectators had to contend with rail services that started later than usual following Saturday’s strikes by the RMT union, the Transport Salaried Staffs’ Association (TSSA) and Aslef, the drivers’ union.

Organisers had advised people to plan ahead, but said they were “very grateful” to Southeastern and Network Rail for their help in ensuring that train services from central London to the starting point on Sunday morning ran as planned.

Sunday’s TCS London Marathon marks the third time it has taken place in October after it was moved due to the Covid-19 pandemic.

Organisers said the race will be returning to its traditional spring slot in 2023 with the ballot for places to run on April 23 open until 9pm on October 7.

Eliud Kipchoge, who is not running in this year’s race after his world record-breaking run in Berlin last weekend, handed out medals at Saturday’s TCS Mini London Marathon which saw thousands of children take part in 2.6k and one-mile events.

Please log in or register to upvote this article
charity