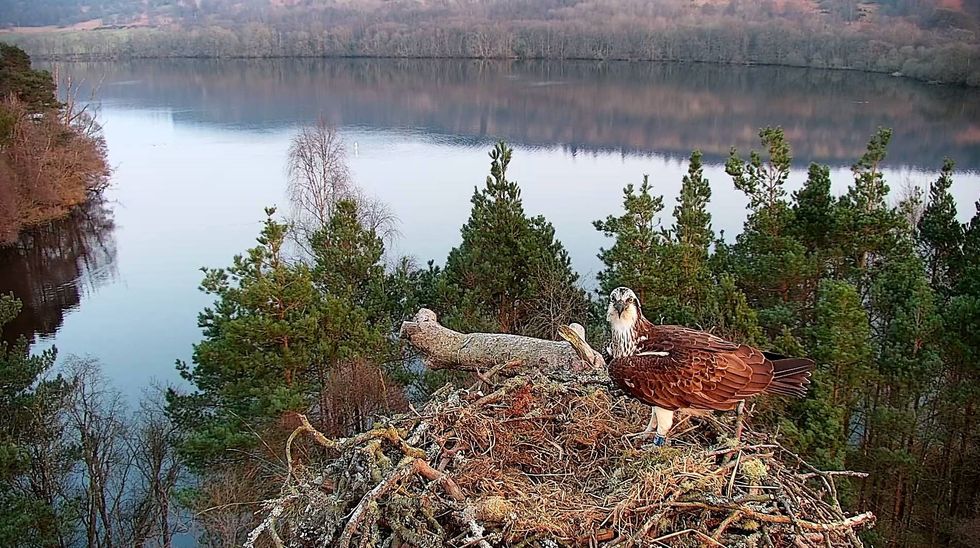 A female osprey has been reunited with her mate after returning to her nest at a nature reserve for a third season.

The bird, known as NC0, landed on the nest at the Scottish Wildlife Trust’s Loch of the Lowes Wildlife Reserve in Perthshire at 6:14pm on Wednesday following a long migration.

Her mate, the male osprey LM12, which returned to the reserve on March 13, visited her on the nest around half an hour later and they were seen trying to breed on Thursday morning.

She first bred with LM12 in 2020 and the pair have successfully raised three chicks.

It wasn’t long before she was loudly demanding fish from LM12, and the pair were seen attempting to breed early this morning

“Despite living totally separate lives during the winter, ospreys settle into life on the nest almost immediately.

“It wasn’t long before she was loudly demanding fish from LM12, and the pair were seen attempting to breed early this morning.

“Since LM12 arrived back on 13 March he’s been busily preparing the nest for the season ahead. It’s exciting to think that in just a few weeks’ time NC0 could be incubating her eggs.”

People around the world can follow what is going on at the nest on the Scottish Wildlife Trust’s live osprey webcam.

Ospreys were extinct in Britain for much of the 20th Century but began to recover in the 1960s and an estimated 300 pairs of ospreys now breed in the UK each summer.

Most of these birds migrate to West Africa but some spend the winter in Spain and Portugal.

Laura Chow, head of charities at People’s Postcode Lottery said: “Our players will be thrilled to hear that the ospreys have reunited at Loch of the Lowes Wildlife Reserve.

“With funding raised by players of People’s Postcode Lottery, the Scottish Wildlife Trust works to protect these iconic birds of prey and help people discover more about their amazing lives.”

Please log in or register to upvote this article
Loch NessPortugalSpainUK