Three-legged tortoise settles into new life on wheels at zoo 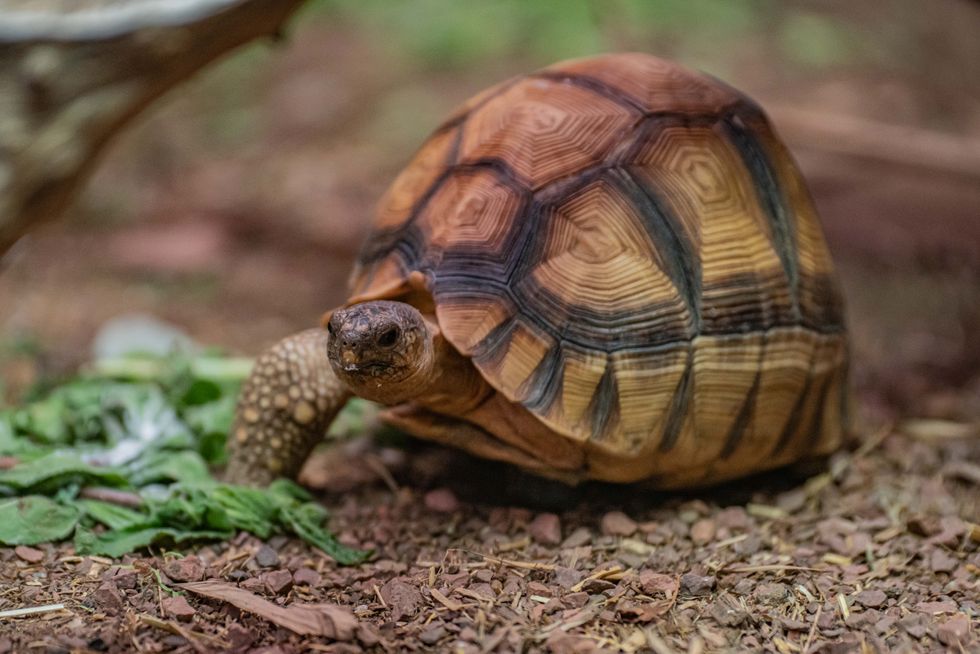 A three-legged tortoise which was rescued from smugglers is settling into a new life on wheels at a zoo.

The ploughshare tortoise, which is now at Chester Zoo where it has been nicknamed Hope, was discovered by customs officials in Hong Kong in 2019 in a suitcase with 56 other live, endangered tortoises.

The owner of the suitcase, a would-be wildlife trader travelling from the Comoro Islands, off the coast of East Africa, was later jailed for two years, a zoo spokesman said.

The male tortoise was initially taken to Kadoorie Farm and Botanic Garden Wild Animal Rescue Centre in Hong Kong where it was found to be missing its front left leg, as well as claws on its hind left leg.

To help the creature get about, experts fitted three support rollers under its lower shell to help it balance.

Further modifications have been made to the wheels by vets at the zoo since it arrived in the UK.

Conservationists are now aiming for Hope to live up to its nickname by joining a European conservation-breeding programme and helping save the species from extinction.

Curator of lower vertebrates and invertebrates at Chester Zoo, Dr Gerardo Garcia, said: “Hope is an incredibly special tortoise, for many reasons.

“Firstly, ploughshare tortoises are exceptionally rare. It’s not just the world’s most threatened species of tortoise, it’s one of the most threatened animals on the planet, full stop.

“Fewer than 300 now remain in the wild, mostly due to their overexploitation by illegal wildlife traders – leaving them functionally extinct in their home of Madagascar.

“In addition Hope has a remarkable life story, having been rescued from smugglers, discovered to have a missing leg and then having a prosthetic mobility support specially fitted to help him get around.

“It works wonderfully well – he moves even quicker than his three neighbours.

“He’s settling in nicely to his new home and hopefully, in several years’ time once he’s more developed, he’ll go on to produce offspring and contribute to the survival of the species thanks to the vital insurance population in conservation zoos.”

In the wild, the ploughshare tortoise is only found on a small remote stretch of sand, rock and bamboo on Madagascar.

Just 63 of the animals live legally outside Madagascar as part of the conservation breeding programmes.

Four of them are at Chester Zoo where they are being observed by scientists using 24-hour CCTV surveillance.

The animals, with distinctive gold and black shells, can fetch exceptionally high prices on the black market.

Mike Jordan, director of animals and plants at Chester Zoo, added:  “This is a species that’s sadly under huge pressure for its survival and there’s a very real possibility that this species could be lost forever.

“That’s why Hope is such an important addition to the zoo. We refuse to sit back and see this incredible species disappear and so our aim now is to maintain an ark population, by coming together with some of the world’s other leading conservation zoos to breed a genetically viable safety net population and prevent its extinction.”

Please log in or register to upvote this article
Chester ZooMadagascarTortoise