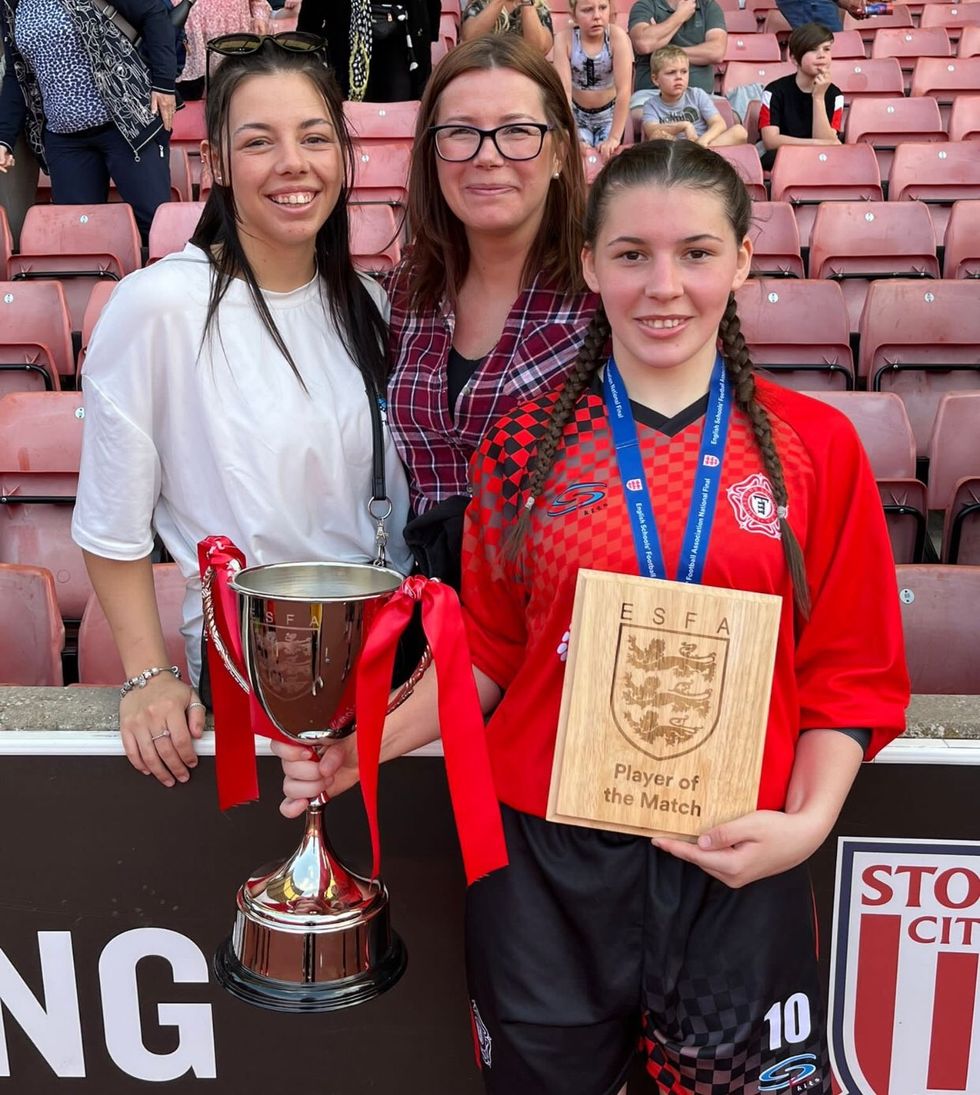 Charlie Chadwick’s (right) dream is to become a lioness one day and through the dual career pathway at Liverpool she now has the opportunity. (Kelly Chadwick/PA)

A mother has praised England’s Lionesses for inspiring her teenage daughter as they prepare to face Germany in the Euro 2022 final.

Kelly Chadwick, 42, from Accrington, Lancashire, will be watching the highly anticipated match on Sunday while on holiday with her two daughters, Katie, 18, and Charlie, 16.

An England win will be particularly poignant for the Chadwick family as it is youngest daughter Charlie’s dream to become a Lioness.

Charlie has just signed for Liverpool Ladies U21 and through the dual career pathway at Liverpool she now has the opportunity to make her dream come true.

Ms Chadwick has credited the current England squad for playing a big part in building her daughter’s confidence.

She told the PA news agency: “Talent is nothing without hard work and every girl will see that through our Lionesses.

“It’s down to (Charlie) now to continue the dedication, commitment and hard work.

“The current England squad and the Euros has finally given her more confidence and passion to turn this dream into a reality.

“We have our fingers crossed for Sunday – the ladies are an absolute inspiration and certainly driving my daughter to aim high and work towards her dream of being one of them in the future.”

Charlie began playing grassroots football as the only girl in her local boys team when she was just nine years old.

She was soon picked up by Blackburn Rovers RTC at a time when England players Georgia Stanway, Keira Walsh and Ella Toone had all played in the older age groups.

Charlie told PA: “For England to get to the final and beating Sweden like they did was incredible.

“You could see what it meant to the team when they won and I was very emotional too.

“They deserve to win the tournament and deserve all the credit and appreciation as this is such a massive achievement and have come a long way in the last few years.”

The Chadwicks will be part of the millions of fans tuning in as England and Germany go head to head at Wembley on Sunday evening at 5pm.

However, the family have been on holiday in Egypt during the recent matches and have found it to be a “nightmare” trying to watch the games while abroad.

“On Sunday we fly home and have booked a late checkout for our room so we can watch the first half as we are getting picked up at 6pm,” Ms Chadwick said.

“It has been a nightmare as you can’t get BBC iPlayer over here, but we were not to be defeated and we managed to find a sports channel and stayed in our hotel room for both the quarter and semi-finals.”

England played in front of a competition-record 68,871 attendance when opening their campaign with a 1-0 win over Austria at Old Trafford, and this weekend’s finale at the national stadium is a sell-out.

Ms Chadwick believes this rise in popularity will help remove the stigma around the women playing football.

She said: “Over the years I have seen more and more girls join grassroots team (but) I don’t think girls and women have ever had the credit or media coverage they deserve.

“I believe with recent events this will give more girls the confidence to pick up a ball and start playing football without having to feel they can only play with boys and will not be good enough.

“I also feel the boys will respect the girls more without sneers or stigma.

“We are so proud of the ladies and their commitment to doing what they believe in.”

Charlie added: “Everybody must get behind the lionesses on Sunday as having the support and belief behind you makes you want it more and gives you that extra effort to not only do it for your country but your friends and family too.”