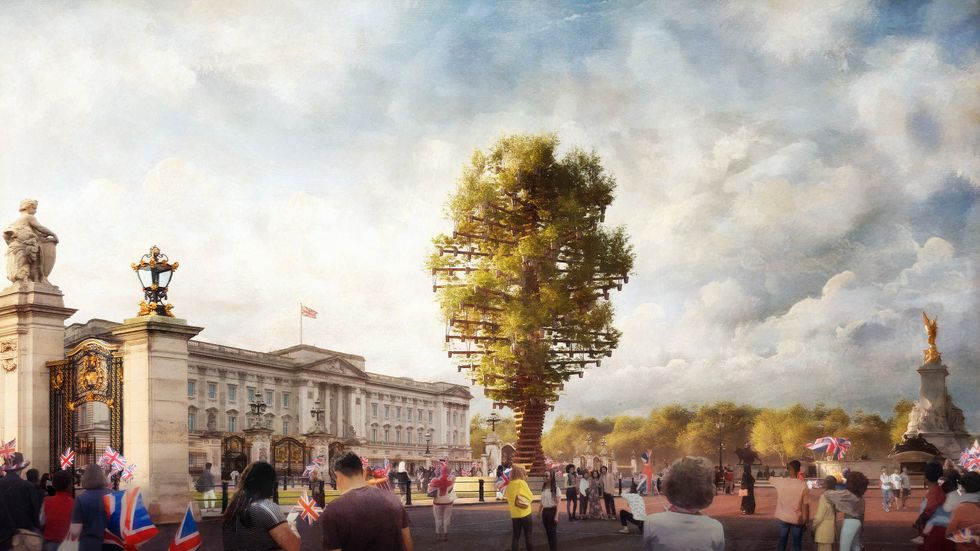 A huge sculpture made up of 350 British native trees is to be erected outside Buckingham Palace to mark the Queen’s historic Platinum Jubilee.

An artist’s impression shows how the 70ft structure, made up of small trees in aluminium pots “sprouting” from timber-plank branches, will tower over the palace gates during the four-day bank holiday weekend in June.

It will form a centrepiece of celebrations at the palace, which will include a live pop concert to be held in front of 10,000 people.

The sculpture was announced on Friday which is Earth Day, with the Prince of Wales also marking the occasion with an environmental project for children.

The structure ... is coming together from workshops and nurseries across the country as one part of an incredible community campaign that’s literally changing the landscape of our nation

The “Tree of Trees” sculpture, created by British designer Thomas Heatherwick, reflects the planting of more than a million Jubilee trees as part of the Queen’s Green Canopy (QGC).

The initiative, which spans two official tree-planting seasons, has already seen thousands of people planting Jubilee saplings across the UK to create a canopy of green in tribute to the monarch’s 70 years of service to the nation.

The trees that make up the sculpture will be gifted to community groups and organisations at the start of the next planting season in October.

Royal tree-planting has long been a staple duty for the Windsors and is usually used to commemorate official visits.

During her reign, the Queen has planted more than 1,500 trees across the world.

Mr Heatherwick, whose past designs include London’s Coal Drops Yard and office buildings for Google, said it was an “honour” to work on the project.

He said: “The structure, created from 350 British native trees and recycled steel, is coming together from workshops and nurseries across the country as one part of an incredible community campaign that’s literally changing the landscape of our nation.”

The sculpture is partly made from old surplus steel and materials are being sourced from UK suppliers to minimise transportation, energy use and waste.

The Prince of Wales marked Earth Day by challenging children to draw or write about keeping the planet healthy.

In a video message released by the Prince’s Foundation, Charles said: “Take out a blank piece of paper and draw, paint or write about the future you would like to see, one that puts nature at the heart of everything we do.

“That way we can share our ideas with as many people as possible.

“And together we can help make our planet strong and healthy for generations to come.”

The prince’s words are from the foreword he wrote for It’s Up To Us, a book for children explaining the Terra Carta, a roadmap to sustainability.