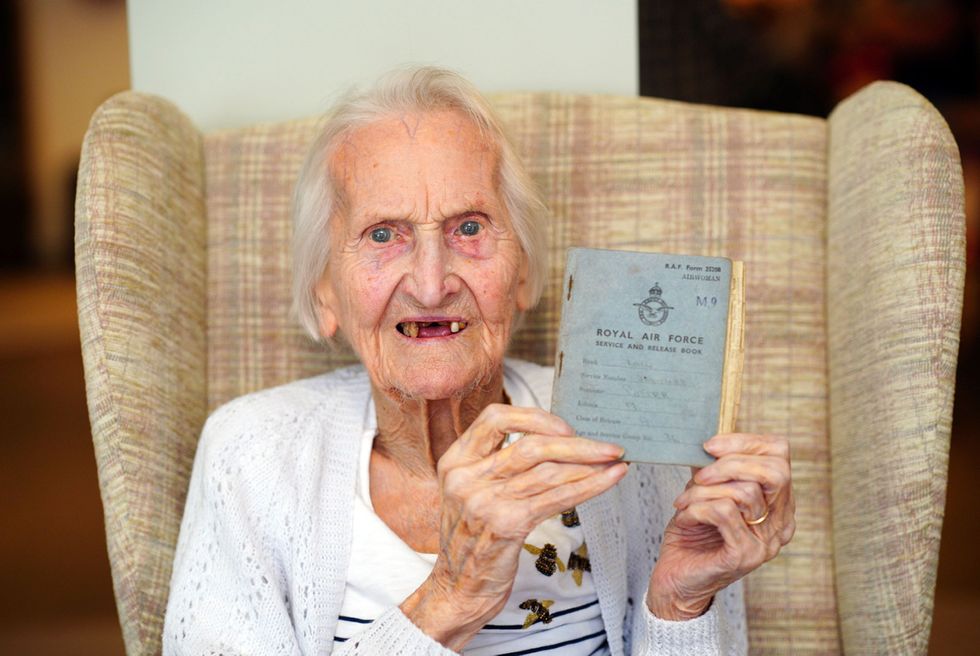 A 99-year-old RAF veteran has had her Second World War debt repaid when she was presented with a set of five shilling coins.

Peggy Terry served with the Women’s Auxiliary Air Force and when she was discharged in 1945 was still owed the money.

And 77 years later, the debt was repaid by the RAF during a special ceremony with friends and family at Mrs Terry’s home in Gorslas, Carmarthenshire.

It was only by chance during the Covid-19 pandemic that the debt owed to Mrs Terry was discovered.

Aircraft Specialist First Class William Anderson, who is based at RAF Coningsby in Lincolnshire, was deployed to South Wales as part of an operation assisting the NHS.

Mr Anderson was driving an ambulance while crewed with a paramedic and they attended Mrs Terry’s home in February.

As a veteran, Mrs Terry recognised the beret worn by Mr Anderson and during the conversation it transpired that she was also based at RAF Coningsby during the war.

During their chat, they were looking through her discharge papers and there was a joking reference to Mrs Terry still being owed five shillings for her service.

As a gesture of appreciation, RAF Coningsby asked Mr Anderson to present her with the shillings, which are dated 1941 to 1945 and reflect the years she served.

Holding the coins, Mrs Terry said: “I haven’t got a clue what I could have spent them on. They’re heavy.”

Flicking through her service book, she said: “You never went anywhere without your service book – that was your passport. You had to carry that wherever you went.”

Asked what would happen if you were caught without it, she replied: “You’d get shot.

“You got into trouble if you didn’t have it with you. You were confined to barracks, hours in the cookhouse washing up and peeling spuds.”

Mrs Terry, who served under her maiden name of Margaret Potter, was a Leading Aircraftwoman and during an 18-month stint at RAF Coningsby towards the end of the war and helped service the Lancaster bombers.

“I was sparking plug cleaner on the Lancaster bombers. The plugs all had to be kept for the same engine until they got damaged, and they were replaced,” she said.

“The engineers used to bring the plugs into us, and we had to strip them down and clean them in petrol, which wasn’t very nice, and then reassemble them.

“The main part was resetting the points – that was essential. We did other engines as well, depending the aircraft that were on the station.

“It is a trivial little thing, but it is so essential.”

Asked about when the war was over, Mrs Terry replied: “It was very nice. We could go home and go wherever we wanted to.

“Parties? I never went to any.”

Mrs Terry was also presented with her rank badge and a framed print of the current aircraft at RAF Coningsby and those based there during the war.

An inscription says: “To Peggy, it was an honour and privilege to meet you and I would like to say on behalf of the RAF Coningsby and the whole RAF thank you for your service.

“We have a debt to you and everyone you served with that we can never repay.”

Mr Anderson, a motor transport driver, said: “It was a great experience to work with the Welsh Ambulance Service, the variety of people I met and the opportunity to see what our ‘blue-light’ services do.

“It was lovely to meet Peggy and to hear of her experiences at Coningsby during the war.

“For the RAF and for me personally it is tremendously important that we remember and recognise the service of our veterans, so I’m delighted to be here today meeting Peggy again and presenting her with the coins.”

Mrs Terry’s daughter, Cathy Jones, added: “Our family is grateful to the RAF and to the Welsh Ambulance Service for the care they provided to our mother.

“It is nice to know that the RAF still cares for its veterans and the presentation today was a lovely gesture on their behalf.”

Kindertransport memorial unveiled at port that helped save thousands of children