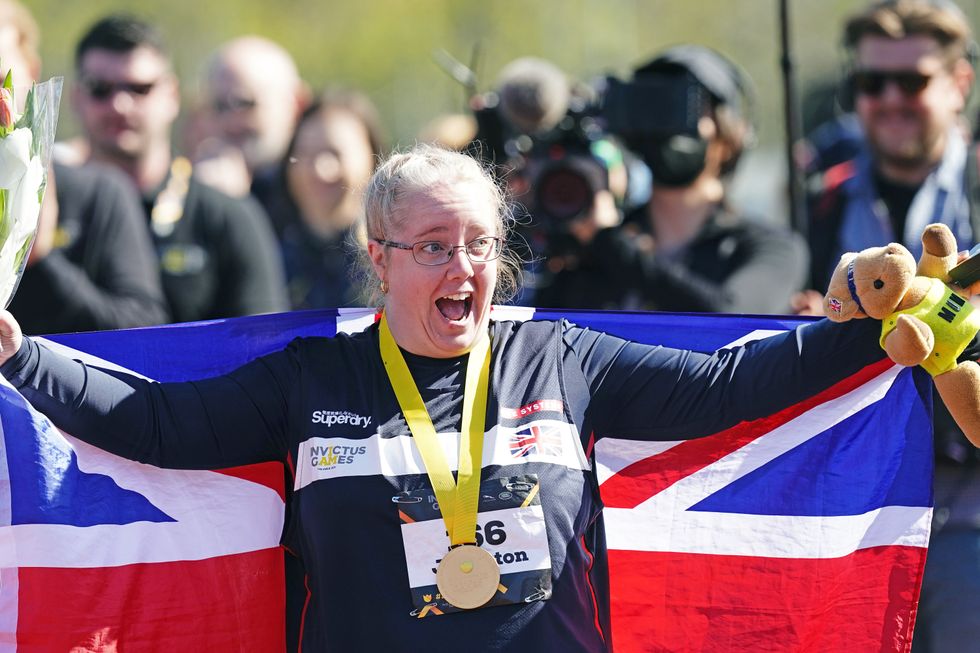 A gold medal-winning amputee mother at the Invictus Games said her guilt at feeling like she could not play with her children spurred her on to show them anything is possible.

Lisa Johnston, 39, who lives in Doncaster, had a chronic pain condition and became an amputee in 2016.

The mother of three boys said she felt “useless” with her children and more like a “spectator” than a parent.

But Ms Johnston has overcome adversity, by not only becoming active, but reaching the Invictus Games in The Hague and winning gold in the shot put.

She was photographed in a joyous hug with both the Duke and Duchess of Sussex after receiving her medal from Harry on Sunday.

Ms Johnston said her reason for getting involved in the Invictus Games, which has its second day of competition on Monday, was to show her children “you can achieve what you want to achieve”.

The Team UK competitor, who was in the Army for 17 years as a medic in the Royal Army Medical Corps, said the pain she suffered with Complex Regional Pain Syndrome (CRPS) was “the worst type of pain going”.

Speaking to the PA news agency, she said: “Imagine having your leg a million paper cuts, alcohol gel poured on, rubbed down with sandpaper, whilst in a fire, and that doesn’t even cover the tip of how painful my CRPS was.”

After two-and-a-half years of medication and treatments, nothing worked and she had the amputation.

Ms Johnston said of her military job: “I loved my job and when this happened I was devastated.

“And not only that, but being a mum, as a female’s perspective, a mum’s job is to look after kids, nurture kids, but teach the kids.

“When you’ve got an injury, or again, a medical condition, and that’s taken away from you, what do you do?

“You’re nothing, you’re useless, you’re not needed. And I did feel like a spectator, rather than a parent, because I couldn’t look after myself let alone look after my kids.

“There’s so much guilt that comes with that. And again, going back to the reasoning behind doing the Invictus Games was to show my children that no matter what happens in life you pick yourself up, you can achieve what you want to achieve.”

“And the anxiety of going out, I was a hermit, I didn’t want to go out, people were staring, and it made me feel really uncomfortable.

“And it wasn’t until I was at home and the boys were saying ‘Mum come and play with me, can we play catch? Can we play in the garden?’

“And I was like ‘No I can’t, I can’t’ and I felt awful. I felt guilty that they were missing out because of me not being able to do it,” she said.

Ms Johnston said she felt she needed to show her children that no matter what happens you can do something about it, so she joined a gym and her first class was an elderly aerobics class.

“The ladies were very lovely and they made me very welcome. And I found out I could do it. It felt great.

“I was like ‘Yeah I can do this’. And after a few weeks I was like ‘I need more’. So I did body pump and then I did spinning and I’ve done all sorts, and I felt amazing and it got me out of the house and it got me back into being active and I could play with the kids.”

She said it was around about this time she received an email about the Invictus Games, and she felt she had really just learned to walk and wondered what she would be able to do.

Ms Johnston put her name down and a few months later received an email saying she had been chosen.

She said it is not about what you can do, but is about putting yourself back out there.

“Being in the Invictus Games with so many similar people in similar situations, like-minded thinking – it’s been amazing.

“It’s so inspirational, speaking to everybody around here and everybody supports each other,” she said.

Ms Johnston, who is sporting Team UK and Invictus themed polish on her nails, said that just getting on the starting line is a huge achievement for some people.

“Putting yourself out there is a scary thing after something that’s been life-changing,” she said.

Talking about the moment she hugged Harry and Meghan, Ms Johnston said: “It was as I was walking out they were just leaving and he went to shake my hand again and I was like ‘Come on Harry I’m a hugger’.

Ms Johnston said Harry is “such a sound guy”, adding that he is “one of the lads”.

She said: “He’s got that kind of banter with everybody, but it’s a side you don’t generally see because obviously he’s a royal.”

Harry founded the Invictus Games to aid the rehabilitation of injured or sick military personnel and veterans from across the globe, by giving them the challenge of competing in sporting events similar to the Paralympics.

Some 150 friends and family have joined competitors in The Hague to cheer on Team UK, supported by the Royal British Legion.

Harry and Meghan made their first public appearance together in Europe since quitting as senior working royals more than two years ago when they attended a reception at the games on Friday.

A camera crew filming for a Netflix documentary called Heart Of Invictus – a series from Harry and Meghan’s Archewell Productions following people competing at the event – has been seen close to the couple since they arrived at the games.

And on both Saturday and Sunday, a drone could be seen hovering above events that the couple were at.

The pair signed a multimillion-pound deal with streaming giant Netflix in 2020.

It is expected that Harry will be in The Hague until the games close on Friday, while Meghan is understood to be flying back to the US ahead of him.

Please log in or register to upvote this article
HarryMeghanThe Hague

What is the Wordle answer for 16 May?