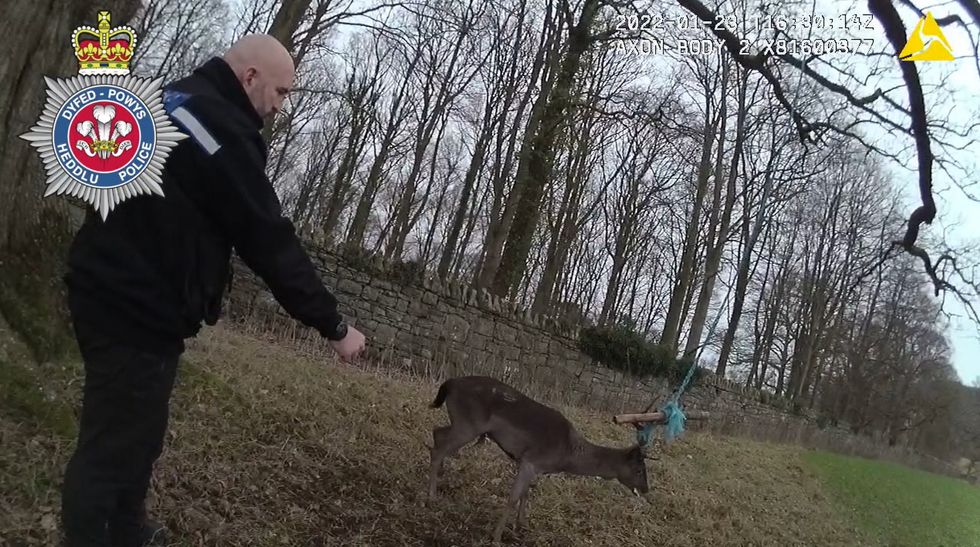 A pair of “animal-loving” police officers in Wales used a pair of scissors from their first aid kit to rescue a deer that was trapped in a rope swing.

A member of the public called Dyfed-Powys Police after spotting the deer with its antlers tangled in the swing in a field near Powis Castle in Welshpool, Powys, at around 3.30pm on Sunday afternoon.

While the police do not usually respond to calls about animal emergencies, two members of the Powys Roads Policing Unit – Pc Marcus Wright and Pc Dave Wilkinson – were in the area and decided to investigate.

“I saw the call come on the system and that it had been referred to the RSPCA,” Pc Wilkinson said.

“But as animal lovers I suggested to Marcus that we go and see if we could help the animal and prevent any suffering that it was going through.”

When they arrived, the deer was in a distressed state, frothing from its mouth and breathing heavily.

“The poor thing was swinging by its antler and must have been exhausted and terrified,” said Pc Wright.

Bodycam footage shows the officers attempting to grab the rope and free the panicked animal.

As the deer began to tire, Pc Wright gently scratched its forehead to calm it down, while Pc Wilkinson cut the rope with scissors from the first aid kit.

“Fortunately, it calmed pretty quickly which enabled us to get to work untangling its antler so it could be freed,” said Pc Wright.

“Within 15 minutes it was freed, but it sat there for a little while to catch its breath and then it was off.

“As animal lovers, it was great to see, and a very rewarding experience for us both.”

Please log in or register to upvote this article
DeerPoliceWales

‘Euphoria’ star said he fantasised about Amber Heard 'beating' him up