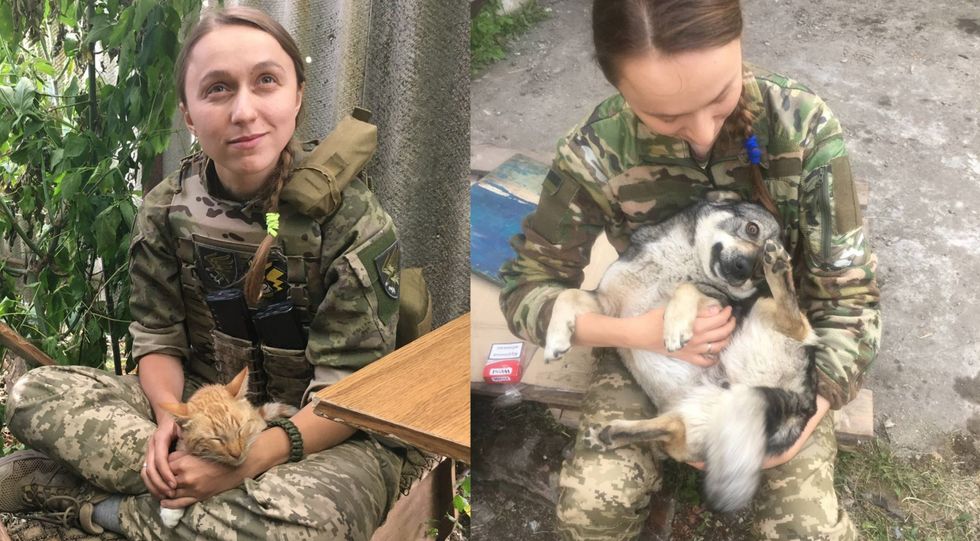 An “animal-loving” Ukrainian sniper and her husband fighting on the frontline have rescued dozens of pets after discovering them abandoned on the battlefield.

Oksana Krasnova, 27, uses her wages to pay for food and supplies to nurse the animals back to health before arranging for them to be transported on military vehicles to the Ukrainian capital, Kyiv, to be rehomed.

Ms Krasnova had previously worked as a lawyer in the capital until Russia invaded the country six months ago and she joined the Ukrainian frontline defence, fighting in the Donetsk region.

In between working as snipers, Ms Krasnova and her husband Stanislav Krasnov, 35, have rescued almost 30 pets they have discovered when passing through abandoned villages.

Speaking to the PA news agency from the frontline, Ms Krasnova said: “I love animals a lot and I used to help rescue animals with my husband even before the Russian invasion.

“I come across a lot of abandoned pets when I am going about my duties and I can’t just leave them.

“It’s hard to evacuate animals from the frontline but these poor pets have been used to living with humans so they can’t survive on their own.

“I have my own pets who are being looked after by my parents in Kyiv and I could never dream of abandoning them.”

Ms Krasnova said her most memorable rescue to date was the first abandoned animal she saved on the frontline.

The couple had heard “some strange sounds” while walking through an abandoned house and found a small, black dog trapped in the building.

Ms Krasnova said the animal was “clearly traumatised” and had been surviving off raw potatoes when they discovered her.

“I think she had been there for about a month – it was awful,” she said.

“She was just lying on the floor and we placed a pillow under her head while she was barking and crying and foaming at the mouth.

“We had to push her into a box and transport her in our military vehicle.

“She was having seizures and we didn’t think she would survive.”

Ms Krasnova fed the dog every hour and cared for her around the clock until her health began to improve.

“We have a friend who has some volunteers out in Kyiv who work with traumatised animals and he took in the poor dog,” she said.

“Months on, she’s now okay and she lives with a foster family.”

Ms Krasnova said she mainly rescues dogs and cats but has occasionally helped smaller creatures like birds and rabbits, which she tends to release into the wild once healthy.

“At the moment where we are based we have a herd of pigs with us from one of the nearby villages,” Ms Krasnova said.

“Obviously we can’t rescue them as they won’t all fit in our military vehicles but we are making sure they are okay and have enough food.”

The rescued animals have become a huge part of the couple’s life and even when Mr Krasnov was wounded, he was joined by a small kitten while he was strapped to a stretcher receiving medical treatment.

“The animals we rescue are really very grateful and loyal,” Ms Krasnova said.

“Sometimes it’s really hard (to say goodbye to them) mainly because I spend so much time treating them.

“But I feel relieved because I know that they won’t starve and suffer again,” she added.

Please log in or register to upvote this article
AnimalsConflictKyivPA ReadyPetsRussiaUkraine