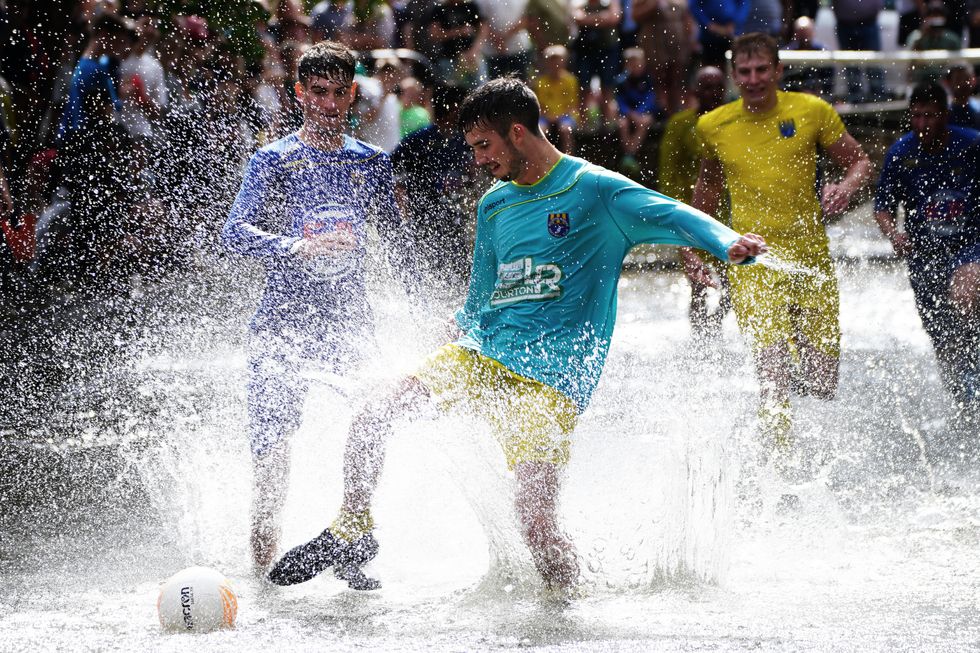 Football matches are normally called off if the pitch is waterlogged – except in the Cotswolds.

Two teams braved chilly water to take part in the annual Football In The River match in Bourton-on-the-Water, Gloucestershire.

While much of the country has basked in a heatwave this summer and many areas have been declared a drought, there were no such concerns in the Cotswolds as the pitch was in tip-top wet condition.

The 30-minute game was played out between mixed teams of Bourton Rovers 1st XI and 2nd XI and kicked off at 11.30am.

Around 2,000 spectators lined the banks of the river to enjoy the annual five-a-side clash that takes place in the ankle-deep water of the Windrush.

It is not clear how the idea of playing a football match in a river first arose, but the tradition has reportedly been going strong for around 100 years.

The match regularly draws large crowds and fans are advised to wear waterproofs if they plan to stand close to the side of the “pitch”.

This year’s match ended 3-3 after the 2nd XI in yellow shirts scored a last minute equaliser when the ref was distracted.

The 1st XI had taken an early lead and a second goal was ruled out after the referee consulted the riverside VAR.

The second half started with the 1st XI 2-1 up and they quickly made it 3-1 before the 2nd XI missed a controversial penalty when it was saved by the goalkeeper.

The 2nd XI came back into the game when the 1st XI had a player sent off for a second bookable offence and pulled the game back to 3-2.

They had an equaliser chalked off by the ref for collapsing the goal posts but at the death brought the game to 3-3 with the last kick of the game.

Jack Galpin, who refereed the game dressed as a woman, said: “It is brilliant to have the crowds back as the last couple of years have been a lot quieter during the pandemic.

“It is brilliant for us as a club as this event is our main fundraiser for the year and it was amazing to see so many people watching.”

Animals at a wildlife park pampered with ice lollies in heatwave

Please log in or register to upvote this article
CotswoldsGloucestershire

Who is the shortest-serving prime minister in recent UK history?