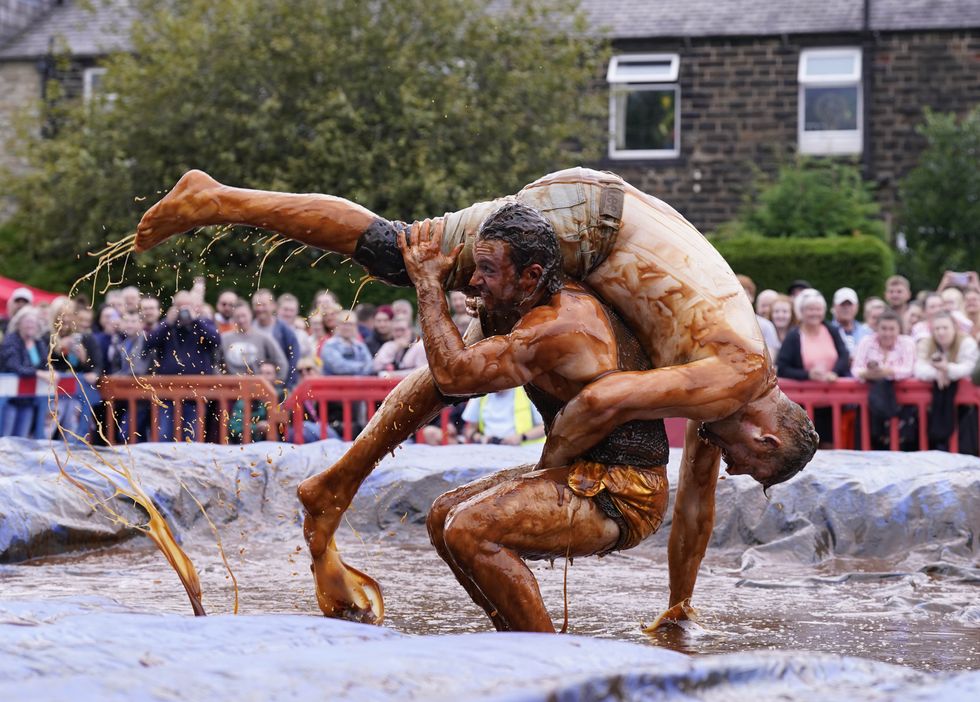 Wrestlers have two minutes to defeat their opponent at the annual event, which an organiser admitted is ‘smelly’ (Danny Lawson/PA)
PA Wire/PA Images - Danny Lawson

Competitors in Lancashire have swapped roast potatoes for leotards as they took part in the 12th annual World Gravy Wrestling Championships.

Described as “one of the world’s craziest culinary competitions”, the annual charity event at the Rose ‘N’ Bowl Pub in Stacksteads, Rossendale, returned on Monday after two years of cancellations due to the Covid-19 pandemic.

Raising funds for East Lancashire Hospice, the event sees competitors grapple in a pool of gravy for two minutes – with points scored for fancy dress, entertainment value and wrestling ability.

“It’s amazing to be back and people have come from far and wide … the atmosphere is absolutely bouncing,” Carol Lowe, 50, restaurant manager at the Rose ‘N’ Bowl, told the PA news agency.

“Basically, people come in fancy dress – men and ladies – and then they wrestle in gravy and get eliminated as the day goes on.

Among those competing, Ms Lowe said there were “two half-naked gents in gold shorts rolling around in the gravy”, while other eye-catching outfits included a clown, a nun and a security guard.

Ahead of the main event, a boxing match was held in the ring, which Ms Lowe admitted was “quite smelly”.

The gravy used in the event is made at the Real Lancashire Black Pudding factory and wrestlers are hosed down by the local fire brigade after their fights.

Asked if anyone would be putting the gravy on their Sunday roast after the event is finished, Ms Lowe said: “Definitely not, no.

“It’s all cleaned up and washed away.”

Ms Lowe said the success of the event is down to “so many people” who work to organise it.

Please log in or register to upvote this article
GravyLancashirewrestling