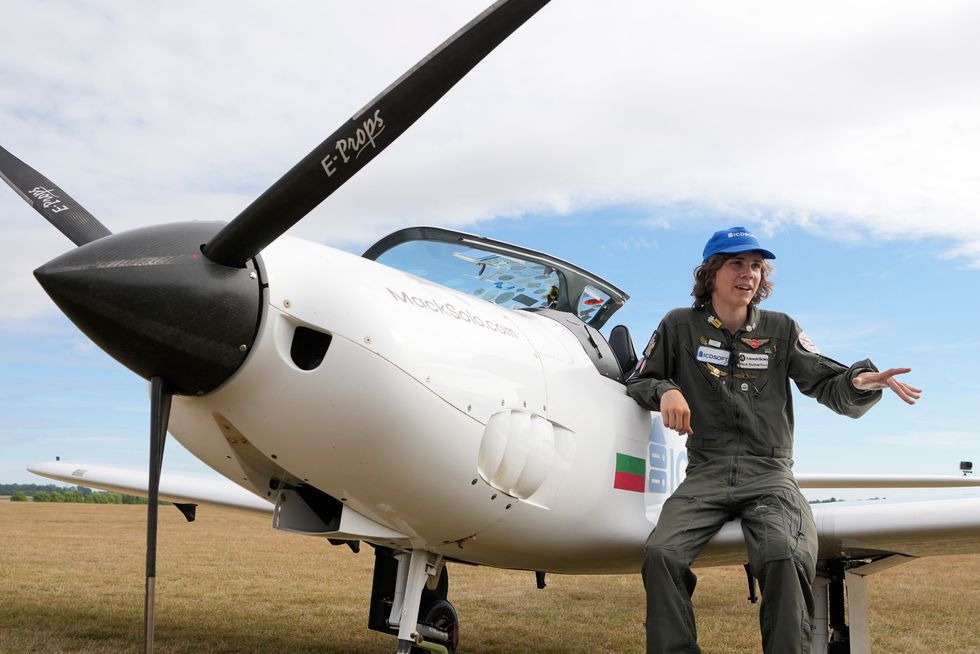 Seventeen year old Anglo-Belgian pilot, Mack Rutherford, speaks with the media after landing at the Buzet airfield in Pont-A-Celles, Belgium, Tuesday, Aug. 23, 2022. Rutherford landed in Belgium before flying on to Slovakia and Sofia, Bulgaria, for the final leg of his Guinness World Record attempt to be the youngest person to the fly around the world solo in a small plane. (AP Photo/Virginia Mayo)
AP Photo/Virginia Mayo - AP Photo/Virginia Mayo

A British-Belgian teenager has become the youngest person to fly solo around the world in a small aircraft.

Mack Rutherford, 17, was greeted by a crowd of supporters after landing west of Sofia in Bulgaria on Wednesday, marking an end to his five-month journey through 52 countries.

The youngster, who comes from a family of pilots, encouraged others to “follow your dreams” after completing the challenge.

Speaking in Bulgaria, he told reporters: “Just follow your dreams, no matter how old you are.

“Work hard and move forward to achieve your goals.”

His journey began on March 23 and has involved facing sandstorms in Sudan, extreme heat in Dubai and airport closures in India.

On Monday, two days before completing his journey, Mack told the PA news agency he was “trying to show that young people can make a difference” and described the experience as “absolutely amazing”.

Mack Rutherford and his sister Zara Rutherford after landing at the Buzet airfield in Pont-A-Celles, Belgium, on Tuesday, the penultimate day of his journey (Virginia Mayo/AP)

He also revealed that the feat involved him at one point sleeping in a shed beside a runway on an uninhabited Pacific island after a “hairy moment” flying through rain and low cloud.

The previous record holder for flying solo was British pilot Travis Ludlow, who was 18 years and 150 days old when he completed his journey last year.

Mack’s trip took him through Europe, Asia, Africa, the US, two oceans, and included a UK touchdown at London’s Biggin Hill Airport.

The teenager flew a Shark – a high-performance ultralight aircraft with a cruising speed reaching 300km/h (186mph).

His sister, Zara Rutherford, has been supporting him along the way after she became the youngest woman to fly around the world, aged 19, in January.

She was among those who greeted him following his final touchdown on Wednesday.

Miss Rutherford told the Associated Press: “While he was flying, I constantly tried to keep in touch and help him.

“Our parents called him every day, and I joined in those conversations.

“I gave him advice on the route, on the flight, so that I could be useful to him.”

The teenager has wanted to be a pilot since the age of three and qualified for his pilot licence in September 2020, aged 15.

His father Sam Rutherford is a professional ferry pilot, and his mother Beatrice is a private pilot.

Adidas dragged into football shirt spat between Morocco and Algeria