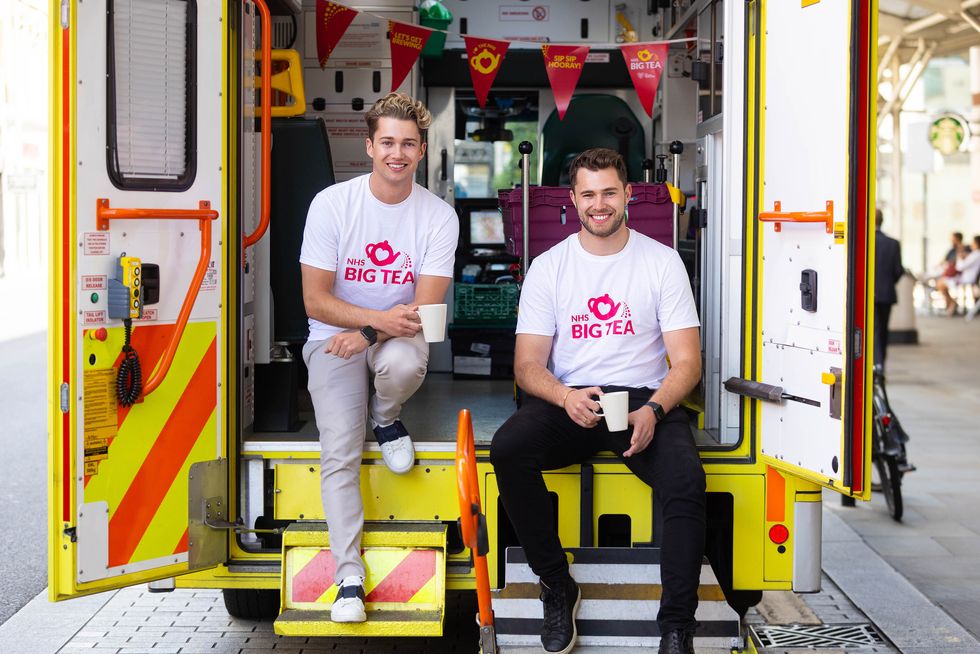 Curtis and AJ Pritchard celebrated the 74th anniversary of the NHS as they surprised staff and patients around London with tea and an impromptu dance class.

The professional dancers visited the London Ambulance Service and Chelsea and Westminster Hospital on Tuesday as part of the nationwide fundraiser the NHS Big Tea.

The brothers spoke with staff members, handed out tea and treats, and were also joined by AJ’s girlfriend and dance partner Abbie Quinnen.

The pair have a special connection to the NHS after Abbie was treated at Chelsea and Westminster’s specialist burns unit in 2020, following a social media stunt gone wrong.

Since then the trio have been vocal supporters of the NHS and the work of NHS charities across the UK, which raise vital funds to help the NHS go further for staff and patients alike.

They are well known for their appearances on the BBC’s Strictly Come Dancing and Ireland’s Dancing With The Stars.

“I cannot begin to describe how grateful I am for everything Chelsea and Westminster Hospital did for us and for Abbie,” said AJ.

“The NHS is incredible but it’s been a tough few years and they need our support now more than ever.

“Funds raised from the NHS Big Tea help NHS charities continue to do their vital work, and Curtis and I are so happy to help shine a spotlight on the amazing contribution they make to the NHS – and have a little boogie of course, like you should at any good birthday party.”

The brothers also spent the morning talking to NHS staff about their experiences during the pandemic.

Curtis said: “We have loved getting the chance to thank staff and volunteers, and celebrate the NHS Big Tea, as well as hear about people’s experiences of the last couple of years during the pandemic.

“What many of them have been through is truly harrowing but it’s not over, and I’m totally inspired by their dedication.

“The NHS does an amazing job but it can’t face every challenge alone, which is why the extra support provided by NHS charities to staff and patients is so vital.

“This is our chance to help and say a big, heartfelt thank you.”

Chris Chaney, CEO of hospital charity CW+ said: “We were thrilled to welcome AJ, Curtis and Abbie on this special visit to mark the NHS’ 74th birthday, which brought fun and excitement to staff and patients.

“We are so grateful for the trio’s fundraising efforts for CW+ over the past few years which has made a big difference to our hospitals, so it was great to see them again today to celebrate this special occasion.”

He added: “We are also incredibly thankful to NHS Charities Together for their support and funding which has enabled us to enhance the healing environment for patients as well as support staff.

“A big thank you to Abbie, AJ and Curtis for helping make the NHS Big Tea at Chelsea and Westminster a huge success.”