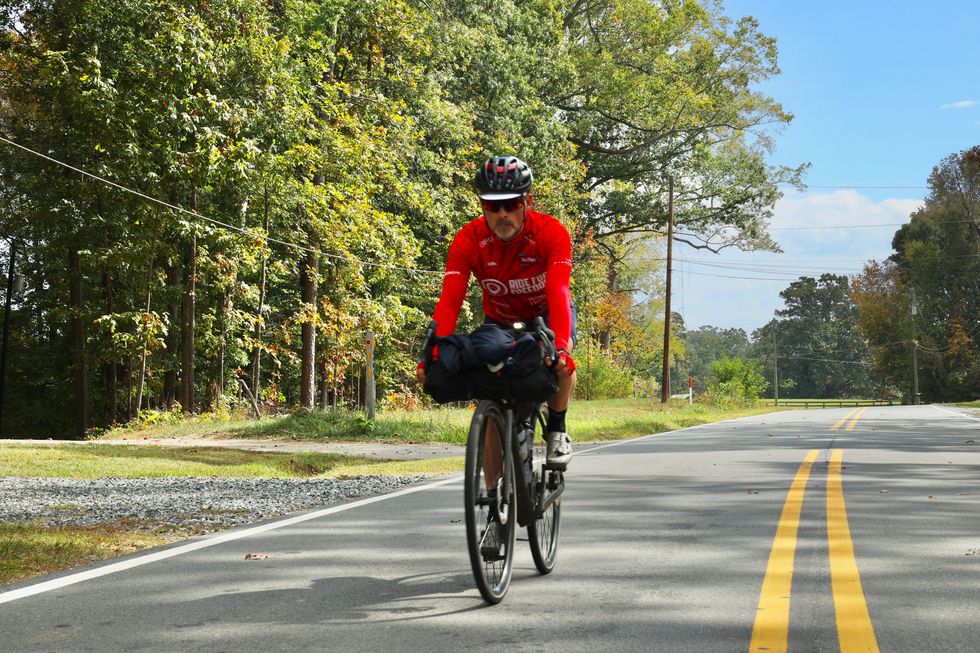 A British cyclist has been left with “great memories” as he prepares to complete a cycling tour of football clubs on the east coast of America to raise awareness of modern slavery and human trafficking for Anti-Slavery Day.

Gordon Miller, based in London, set off on a 1,000km cycling trip between several cities with his friend and videographer James Aubry on October 5, visiting football clubs along the way.

Starting in Charlottesville, Virginia, the pair headed south towards North Carolina and are set to finish their journey in Washington DC on October 18 – Anti-Slavery Day.

Mr Miller is the founder of community interest company Ride For Freedom and is using his US adventure to help raise funds for its Freewheel programme, which empowers survivors of modern slavery to cycle to support their physical and mental health.

Asked how he felt about reaching the final day of the trip, he told the PA news agency: “It’s mixed, to be honest.

“Obviously the closer we get to the finish the realisation is that that the tour will soon be over, and all I will have left is great memories.”

He added that the trip had been a “big moment” in his aim to take Ride For Freedom’s mission “global” and “it’s fitting that we should be ending our hugely impactful two-week tour at midday on Anti-Slavery Day on the National Mall & Memorial Parks in the nation’s capital, Washington DC”.

The trip has provided its fair share of memories, with the engagement the pair had with football teams described as “hugely positive”.

“We visited the stadium which is home to Charlotte FC and the Carolina Panthers, which are an American football team, and the engagement with Charlotte FC was hugely positive,” Mr Miller said.

“They were really interested in understanding the complex issue of human trafficking in the name of football/soccer.

“Now they are keen to collaborate with us to demonstrate their commitment to eradicate it, and also to provide remedy to victims through our Freewheel programme. We’re super excited at the prospect of working together.”

The scenery in Virginia was also a standout favourite for Mr Miller.

“It’s the beginning of autumn and we’ve been cycling in the sunshine along roads through mile after mile of forests and woods where the trees are a kaleidoscope of oranges, browns, reds and yellows,” he said.

“The leaves have been tumbling off the trees in front of us as we’ve been cycling through, it’s really been quite magical at times.

Proving that sometimes even the hardest days can go “hand-in-hand” with the best days, Mr Miller said the pair’s toughest stage – a 124km ride from Salem-Roanoke to Ararat on the third day, which included 2,000 metres of climbing – provided “spectacular” views across the Piedmont region and the Blue Ridge Mountains, despite being “a lot” of work.

He added that it had been “really affirming” to see people supporting the cause “in spirit and through their donations”.

Even though the east coast trek ends on October 18, people can still support the work of Ride For Freedom.

“People can sign up and cycle for however many miles they want and wherever they like – be that in the park, on the road, a track or at home on a static bicycle – between 2-4 December.

“All funds raised will support the development and delivery of our Freewheel programme.”

More information about the fundraising event can be found here: https://rideforfreedom.org.uk/cycle-revolution-virtual/

More information about Freewheel by Ride For Freedom can be found at www.justgiving.com/crowdfunding/freewheelbyrideforfreedom

Arsonists set themselves alight in attack on immigration service

Police identify illegal streamers... and they're coming to get you