Cyclists complete Glasgow to Athens challenge and raise close to £100,000 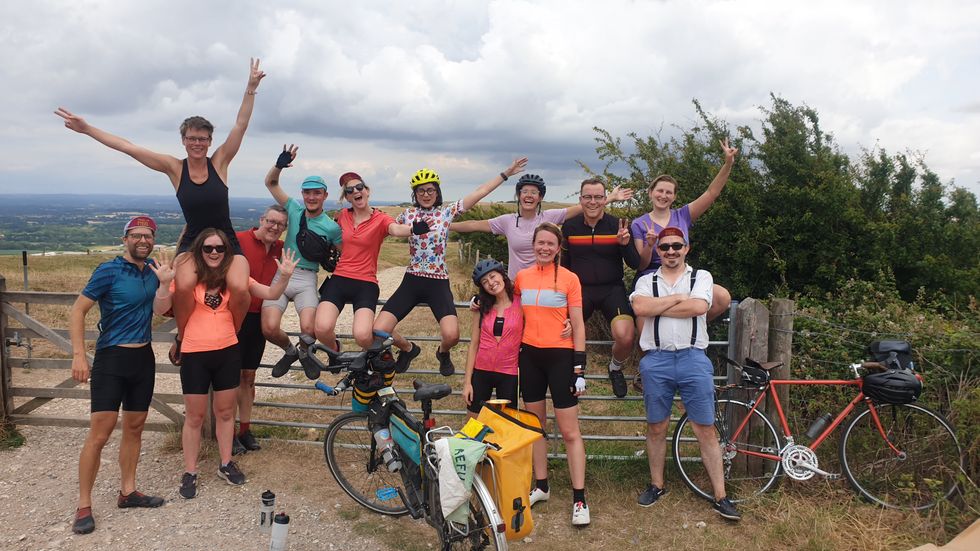 A group of cyclists have completed their Glasgow to Athens challenge, raising almost £100,000, surviving a vomiting bug and getting to pet a baby rescue piglet along the way.

Thighs of Steel – a community of cyclists – took on a nine-week relay ride from Glasgow to Athens, which began on July 16 and ended on September 17, to raise funds for migrant charity MASS Action, with around 100 different cyclists taking part in the cycle at various points.

The group has raised roughly £93,000 out of their £100,000 target – and have cycled through countries including France, Italy, Croatia and Albania, with the latter country giving rise to one of the “toughest moments of the whole trip”.

“A bunch of us got a vomiting bug from swimming in Lake Shkodra [in Albania],” Georgie Cottle, 28, a volunteer coordinator at charity Scottish Detainee Visitors told the PA news agency.

“What was incredible about that, though, was how those who weren’t ill stepped up to look after everyone else, cooking us plain pasta with salt and olive oil.

“Somehow we managed to get back on the bikes the day after and climbed Mount Dajti, the mountain peak that overlooks Tirana, Albania.

“It was one of the greatest descents of the trip, down into a canyon, through two road tunnels at 60kph and across a suspension bridge with birds of prey flying alongside.”

She added that the thought of cycling “even one inch seemed inconceivable the day before”, but the support network from the group propelled all riders to carry out the climbing feat.

Fellow cyclist Tammy Friend, 38, a speech and language therapy student, said that “one person’s puncture is everyone’s puncture”, adding: “The ‘all in it together’ vibe of Thighs of Steel is a unique and special thing.”

As the 5,000-plus km cycle drew to a close through a steep ride up “one of the most famous” hills in Athens – Mount Lycabettus – Ms Cottle said the group feel “simultaneously excited and daunted”.

“We cycle together, of course, but we also cook and eat together, go shopping together, fill up each other’s water bottles and pitch tents together,” she said.

“We all help one another out in so many ways that I really don’t think I can look after myself alone anymore.”

When the group reached the peak, they “rolled down the hill for falafel and beers at a local bike shop, Vicious Cycles Athens.

Ms Cottle added that the ride could not have been done without the support of the 2,700 donors who “gave some of their hard-earned cash to the cause” or the “hundreds of kind, generous, hospitable folk that we’ve met along the way”.

She added: “People who filled our water bottles, translated Albanian road signs for us, pointed us the right way to the best snacks, let us pet their baby rescue piglet, or invited us into their gardens for the night.”

The money raised will be distributed to projects and organisations by MASS Action once the cycle ends, with Khora – an international collective which provides hot food, asylum support, creative workshops and clothes to migrants in Athens – being one of the places which will receive money.

“Khora was funded in large part by Thighs of Steel cyclists and has had a huge impact in its neighbourhood,” Jessie Sullivan, 28, a PHD student at UCL and volunteer at MASS Action told the PA news agency.

“They serve thousands of meals a week and continued serving populations during Covid by delivering meals by bicycle. That’s how a huge proportion of the community stayed fed during the pandemic.”

She added that money from the cycle will also help to fund the Mazi Housing Project, which provides accommodation to single men, who may be “kept out of housing projects because of some assumptions made about men from non-western places”.

“So it’s really great to see those men get the support they need and, once those basic needs are met, begin to thrive in other ways – maybe get a job, join other organisations and perhaps become a leader in their community,” she added.

More information on the Thighs of Steel and their cycle can be found via this link: https://www.justgiving.com/campaign/steelythighs

Scottish union member is being praised for his mesmerising passion

Please log in or register to upvote this article
AthensCyclistsGlasgow