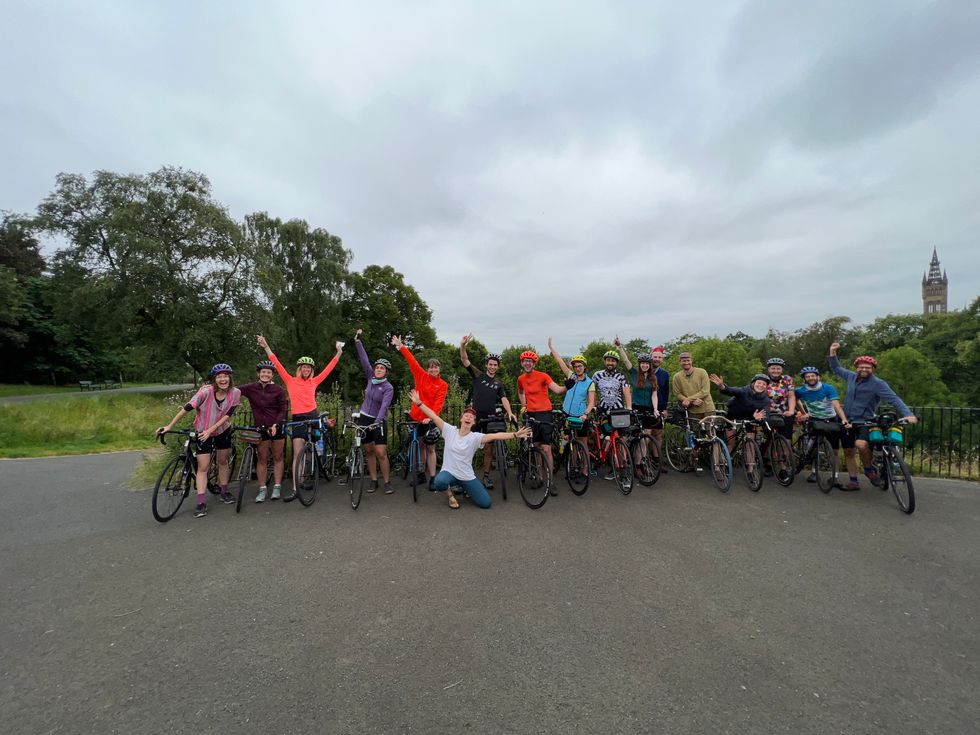 A group of cyclists have faced a night sleeping in a museum, a glimpse of the Eiffel Tower and 6am wake-up calls from a bugle as they raised money for a migrant charity.

Thighs of Steel – a community of cyclists – have taken on an eight-week relay ride from Glasgow to Athens to raise funds for migrant charity Mass Action, with 12 different cyclists taking on a week.

So far, the group has raised roughly £62,000 – surpassing their target of £60,000 – and have cycled through cities including Glasgow, Bristol and Paris.

“This is by far the most we’ve ever raised by this point, only two weeks into the ride, and we couldn’t be more excited by the prospect of smashing our target – very soon,” cyclist David Charles, from Bournemouth, told the PA news agency.

Mr Charles has thanked the generosity and “unwavering support” of “wonderful” and “curious” strangers, who allow the group to “ride further, climb higher and sweat harder than we ever have done before”.

“We’ve been hosted every single night by amazingly generous communities, from Claver Hill in Lancaster to Three Pools near Abergavenny and Lovebrook Farm in Sussex; from the village of Greatham to the commune of Marines, Val d’Oise,” he said.

The 40-year old said that the ride which began on July 16 in Glasgow has already given rise to “so many” memorable moments, which include “sleeping in the Kathleen & May Heritage Museum in Connah’s Quay, Flintshire, and getting breakfast butties” and “many wild swims in Grasmere and Windermere in the Lake District during the heat wave and getting hosed down by a delighted old German woman near Preston”.

He added that one cyclist in his fifties had never been to Paris before and “when we came around a corner to catch a surprise first sight of the Eiffel Tower in front of us, his boyish grin was just pure delight”.

The bugle has already been put to great use at the top of a couple of massive climbs - Hay Bluff in the Brecon Beacons and Ditchling Beacon on the way into Brighton. But it's mostly used as a 6am alarm call to get the cyclists up in the morning

Mr Charles’ iconic bugle has already made several appearances on the trip so far.

“The bugle has already been put to great use at the top of a couple of massive climbs – Hay Bluff in the Brecon Beacons and Ditchling Beacon on the way into Brighton,” he said.

“But it’s mostly used as a 6am alarm call to get the cyclists up in the morning.”

When Mr Charles bugled at the summit of Hay Bluff, he said “a bemused French couple [took] photos of us”.

This will be the fifth time that the group has taken on the Athens cycle, with the major difference being that the group start in Glasgow for the “first time in Thighs history,” as opposed to London.

The money raised will be distributed to projects and organisations by Mass Action, once the cycle ends in Athens on September 18.

“One organisation that we know we will be funding this year is Khora, a collective of community spaces in Athens. Thighs of Steel was actually first set up in 2016 to fundraise for Khora so it’s great that both them and us are still running and still supporting each other,” he said.

Khora provide safe spaces for migrants in what can be an unfamiliar environment, which include a social cafe, where “anyone can find a hot meal and warm company” and a legal advice centre.

More information on the cycle and the donation page can be accessed here: https://www.justgiving.com/campaign/steelythighs

Please log in or register to upvote this article
charitycyclingMigrants