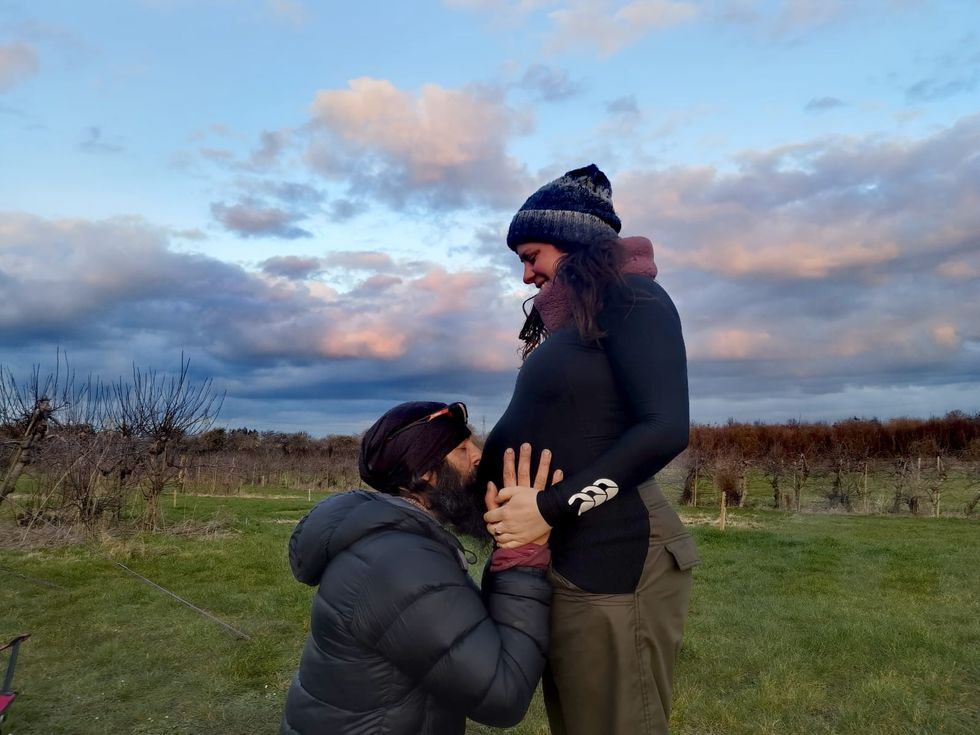 A man who has raised more than £340,000 walking the UK’s coastline for charity has celebrated the birth of his son with the woman he fell in love with along the way.

Christian Lewis and Kate Barron welcomed a baby boy on Sunday after the two met on Mr Lewis’ coastal trek in aid of SSAFA, the Armed Forces charity, one year and nine months ago.

Mr Lewis, who set off walking in 2017, said he “couldn’t be happier” to be a father to Magnus Edward Arden Lewis.

“If I was to be asked before I started this journey if it could go a perfect way, it probably wouldn’t be half of what (has) happened.

“Never in a million years could I have dreamed for this to have turned out how it has.”

Chris Walks UK Coastline has now raised more than £270,000 for SSAFA on Just Giving, with donations through Gift Aid totalling another £70,000.

The adventure along the coast has seen Mr Lewis spend lockdown on an uninhabited island, reunite a message in a bottle with its sender after 20 years, and adopt a dog, Jet.

He began the mission five years ago when he “really started suffering with anxiety and depression”.

“I was just about to become homeless again – I had no money, no gear, I’d borrowed a pair of boots that didn’t fit,” he explained.

“As I was walking home I made the decision there and then I’m just going to walk the UK coastline… I need to get away, I need to better my life.

“And I made a promise to myself that when I came back, I’d be a different person.”

Three years into the task, Mr Lewis met Ms Barron on the Whaligoe Steps in Scotland – where the pair, now engaged, “clicked immediately.”

“We spent the whole night just talking until about three, four in the morning,” he said.

“And we just clicked immediately, it just was so easy.

The walk along the coast has raised more than £340,000 for SSAFA, the Armed Forces charity (Christian Lewis)

“Six weeks later, she came back up for our first date and it was evident that we’re just totally smitten and in love with each other… And two weeks later she quit everything and said, ‘I’m coming with you.'”

The two have been continuing Mr Lewis’ journey across the coastline ever since.

“It really was a bit of a story of Lady in the Tramp – a homeless man living in a tent and scruffy big bed,” Mr Lewis said.

“Absolutely stinking at the time… Kate is so intelligent and well spoken and just so lovely.

“Never in my wildest dreams could I have never have imagined that she would ever want to be with somebody like me but Kate saw me for who I was.”

The family are currently staying in a yurt in Dorset, but baby Magnus will be out in the fresh air with his parents as they aim to finish the challenge.

“Obviously we’ll carry him but once he’s absolutely 100% strong enough to do that and we can put him in slings and tie him to us then we’re going to continue walking from Hastings which is where we left off,” Mr Lewis said.

The way it's worked out, everything's incredible.

“So we look to be finishing in about the next six months.”

Mr Lewis thanked supporters of Facebook pages Chris Walks the UK and Kate Walks the Coast, who have created “a really lovely, happy place to be” online.

“All these people that I’ve connected with around the coastline of the UK, I’ve become friends,” he said.

“We’ve been getting shoals and blankets and everything hand knitted from all different parts of the world sent to us for the baby.

Mr Lewis and Ms Barron hope to marry on an island up north when they have completed the walk in Swansea.

He described the journey as “incredible”.

“Don’t get me wrong, I’ve enjoyed winters in a tent in the most brutal places that the UK has to offer,” Mr Lewis added.

“(But) the way it’s worked out, everything’s incredible.”

To find out more about Mr Lewis’ fundraiser for SSAFA, go to: www.justgiving.com/fundraising/chriswalks

Please log in or register to upvote this article
charity