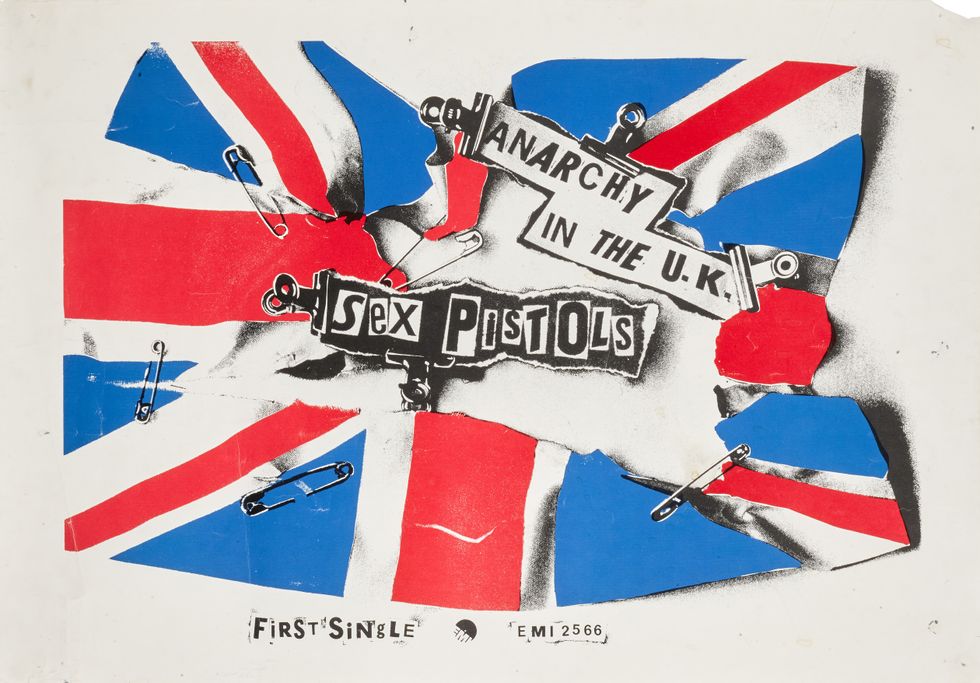 A private collection of “extraordinary” Sex Pistols artwork, posters, lyrics and documents will go under the hammer at Sotheby’s auction house.

The collection was assembled during the 1990s by contemporary art dealer Paul Stolper and critic Andrew Wilson, who was formerly the senior curator of modern British art at the Tate.

It highlights how the influential punk band, fronted by John Lydon, led a revolution in popular music and culture in the 1970s alongside manager Malcolm McLaren.

The Stolper-Wilson collection will go up for auction in London from October 10-21 after being exhibited at locations around the world including the Villa Medici in Rome, the Musee De La Musique in Paris and the Kunsthalle Vienna.

It features the work of artist Jamie Reid, who McLaren met at Croydon School of Art in 1968 and designed the band’s logo and their instantly recognisable cover art.

Featured is his torn union flag for the band’s first single Anarchy In The UK in 1976, held together by bulldog clips (£3,000-£5,000) and the official Silver Jubilee portrait photograph of the Queen “desecrated” in 1977 by a safety pin through the mouth and featuring ransom lettering reading God Save the Queen (£1,000-£1,500).

Reid’s 1977 image of two tour buses whose destinations are Nowhere and Boredom also features and is estimated to sell for between £6,000-£8,000.

His working notebook from 1979 (£15,000–£20,000) features his preliminary drawings for record sleeve designs for the Sex Pistols, as well as notes, memos and records of telephone conversations, many illustrating the collapse of his relationship with McLaren and Virgin Records that year.

This is highlighted clearly in his drawings for a greatest hits album, Flogging A Dead Horse, which takes aim at the music industry (£5,000–£7,000).

Also featured are posters owned by bassist Sid Vicious for their second single God Save The Queen, released in 1977 to coincide with the Silver Jubilee (£4,000-£6,000) and for their first and only studio album Never Mind the Bollocks Here’s the Sex Pistols (£5,000-£7,000).

Stolper said: “The Sex Pistols were about so much more than music alone, they were about attitude, and in a wider context about art.

“When we first began buying works, by chance when we stumbled across an early rock and pop auction, the collectors we knew were interested in signed records and memorabilia, but as art historians this was never relevant to us.

“We never set out to build a collection, but soon understood that here was a body of work that was accessible without too much competition, which we could afford, and which, crucially, spoke to us as art.”

Wilson said: “This was art lived in the streets, collectively made – Do-It-Yourself – as a critique, a reversal, a renewal of culture as well as society.

“Its relevance has not gone away. If anything it has grown over time.

“It has been endlessly fascinating to put together this collection and over the years our appreciation for the Sex Pistols, and for the twin genius of McLaren and Reid, has only grown and grown.”

Sotheby’s specialist Gabriel Heaton said: “The Stolper-Wilson collection is something that people could only ever dream of putting together today.

“Paul and Andrew started acquiring these extraordinary pieces at a time when the Sex Pistols and punk was still a recent memory, and few people were choosing to examine the movement from a historical perspective.

“This gave them early access to important and rare pieces with perfect provenance, which – 30 years later – not only comprise the finest collection of its kind ever to come to the market, but also feel more relevant than ever.”

Last year members of the Sex Pistols were embroiled in a High Court legal battle after guitarist Steve Jones and drummer Paul Cook sued the group’s frontman, Lydon, to allow their music to be used in Danny Boyle’s TV drama about the band.

In a ruling, Sir Anthony Mann found the pair were entitled to invoke “majority voting rules” against Lydon in relation to the use of Sex Pistols material in the series, under the terms of a band member agreement.

Please log in or register to upvote this article
MusicShowbiz