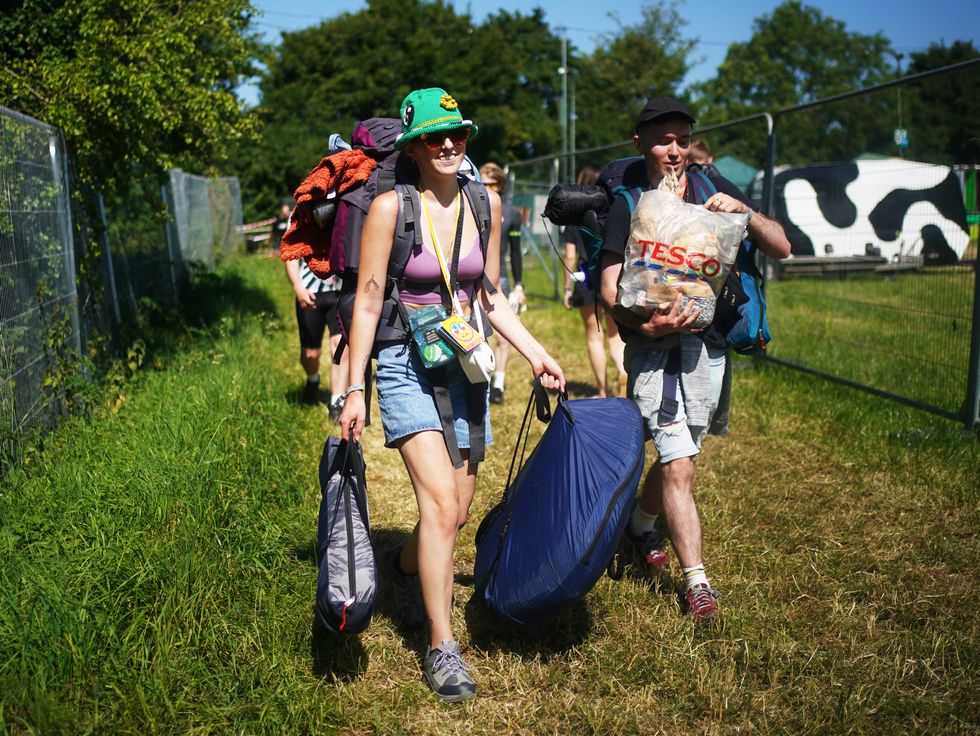 Glastonbury Festival-goers have said the festival “genuinely is the best place on Earth” as it returns after a three-year hiatus.

Punters have been arriving at Worthy Farm in Pilton, Somerset, since the early hours of Wednesday morning for Glastonbury Festival’s 50th anniversary.

As the gates opened shortly after 8am, attendees shared their excitement ahead of the five-day event.

Ben Colgan, from Stockport, drove down to Pilton with his friend on Tuesday evening and slept in the car overnight ahead of the festival gates opening on Wednesday morning.

Michael has just opened the gates and we are BACK! Follow the official @glastolive account for constant updates a… https://t.co/ll56RACPiv
— Glastonbury Live (@Glastonbury Live) 1655884101

Colgan, a 34-year-old technical manager, who will be joined by his wife at the festival on Thursday, told the PA news agency: “It’s genuinely like a dream.

“It sounds a bit sad, but it is. Glastonbury, for the past seven years, has been our thing. Me and my wife came first, and then brought a few friends along, brought a few more, and now there’s about 12 of us that come and camp together.

“And it genuinely is the best place on Earth. It really is.

Ben Colgan travelled down to Glastonbury festival from Stockport (PA)

Jake Sayer, who drove to the festival from North Devon, setting off at 3am, said he felt “relief” after making it into the festival, having been queuing since 5am.

Speaking about the acts he’s most looking forward to seeing, the 28-year-old, surf school manager said: “Personally, I try not to put too much pressure on it.

“I find that if you’re running around all the time with your friends and who they want to see and stuff, it gets a bit stressful.”

Speaking to PA shortly after 9am, Sayer who was already shirtless and making the most of the warm weather, added that he most enjoys the escapism Glastonbury provides from the outside world.

“It’s all about having a good time,” he said.

“I love just feeling really removed from work and all that stuff. You’re here. Your phone’s off. It’s like being on a different planet almost… Glastonbury is massive. It’s got a culture and everyone’s so stoked.”

Chloe Clifford and Gary Stirrup, who are from Wales and working as stewards at the festival, cycled to the site amid the travel chaos caused by three days of train strikes.

Ms Clifford, a 21-year-old cleaner, said “We’re just lucky we didn’t need to get the train,” with firefighter Mr Stirrup, 39, adding: “I feel sorry for everyone on the trains on the minute, but it wasn’t too bad getting here for us.”

Safiye Yilmaz and Maisie Hockings, who set off to the festival by car from Bristol at 4am, said there were a range of acts they were excited to see across the weekend.

Hockings, 27, said: “I want to see Kendrick Lamar, Sam Fender, Billie Eilish. I’m excited to go to the Temple on Friday night for all the techno.”

Yilmaz, a 27-year-old accounts assistant, added: “Whatever your music taste, even if you’re not into music, in the day there’s just so much to do. You just can’t be bored.

“When you see your favourite acts at The Other Stage or the Pyramid Stage, it’s amazing.”

Safiye Yilmaz and Maisie Hockings, both 27 from Bristol, arrived at the festival armed with fancy dress outfits, which they plan to wear on Friday night (PA)

Glastonbury 2022 takes place from June 22 to June 26 and tickets are sold out.

In Pictures: Brave knights battle it out at jousting tournament