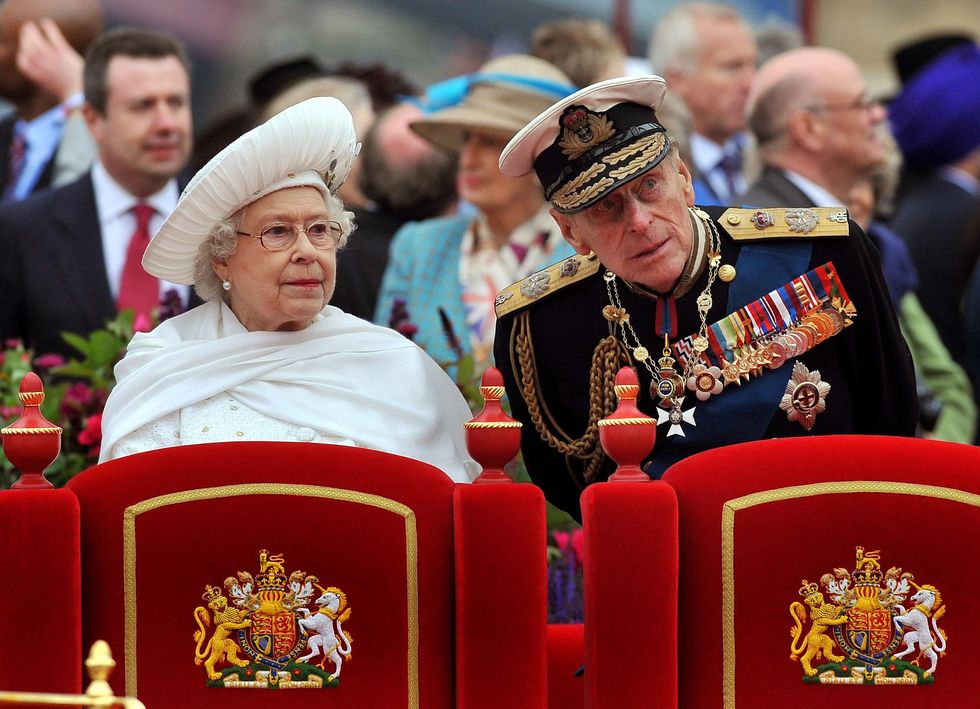 The Platinum Jubilee is the first major milestone the Queen has celebrated without the Duke of Edinburgh, who was at her side during the ups and downs of her long reign.

Philip – the man the Queen described as her “strength and stay” – was married to the monarch for 73 years and devoted decades of his life to royal duty.

He died at the age of 99 in April last year during the pandemic, leaving the Queen grieving for her lifelong confidant.

The Queen after presenting her husband, the Duke of Edinburgh, with a trophy following a polo match in 1956 (PA)PA Archive/PA Images - PA

Ed Sheeran is to perform his love song Perfect at the Jubilee Pageant in a moving tribute to the Queen and Philip.

At the finale of the carnival procession through the streets of London on Sunday, the star will sing the hit romantic ballad as footage of the couple fills the giant screens around the stage.

Other tributes to Philip will appear in the pageant, with a Bollywood-inspired interpretation of the Queen and the duke’s wedding day.

A 20ft (6m) wedding cake, housing a sound system playing classic Bollywood anthems and accompanied by 250 Bollywood dancers, will process down The Mall in a reimagining of their 1947 marriage celebration.

A representation of Philip’s beloved sailing boat Bluebottle will feature in the section devoted to the “Queen’s Favourites”, which will also include puppet corgis and horses.

It was Philip who broke the news to the 25-year-old Princess Elizabeth that her father had died and she had acceded to the throne as Queen while they were away in Kenya on a tour.

A young Prince Charles on board the Dragon class yacht Bluebottle, with his father, the Duke of Edinburgh (PA)PA Archive/PA Images - PA

He was the first layman to pay tender homage to the newly crowned monarch during her Coronation ceremony in 1953, and was there for her Silver and Golden Jubilees and when she became the longest reigning monarch in 2015.

At the Diamond Jubilee in 2012, Philip was with the Queen for the river pageant in extremely wet and windy conditions, joining a flotilla of 1,000 boats along the Thames.

But the next day he was admitted to hospital with a bladder infection and missed the Jubilee concert and service of thanksgiving.

In her most recent Christmas Day broadcast, the Queen poignantly reflected on a year of personal grief, saying there was “one familiar laugh missing” as she acknowledged the death of her husband.

She gave a personal tribute to her “beloved Philip” and remarked how his “mischievous, enquiring twinkle was as bright at the end as when I first set eyes on him”.

The Queen was a young princess when she first met dashing naval cadet Prince Philip of Greece in 1939, during a visit to the Royal Naval College in Dartmouth where he was studying.

Philip, who was 18, was introduced to 13-year-old Elizabeth at the house of the captain of the College.

Handsome, blond-haired and athletic, Philip caught Lilibet’s eye as he entertained her by jumping over tennis nets.

Marion Crawford, Elizabeth’s governess, recalled: “She never took her eyes off him the whole time.”

The pair began writing to each other and Philip was invited to spend the Christmas of 1943 with the royal family at Windsor.

They became secretly engaged in the summer of 1946 while they were staying at Balmoral.

Never-before-seen footage of the Queen, being shown in the BBC documentary Elizabeth: The Unseen Queen on Sunday night, reveals the overjoyed princess proudly showing off her engagement ring in a home movie.

The official announcement was delayed until after Princess Elizabeth reached the age of 21 and returned from a royal tour of South Africa the following year.

The couple wed in November 1947 and a few years later settled into married life in Malta where Philip, a naval officer, was stationed, but the death of King George VI in 1952 changed their world.

Now head of state, the Queen led a life governed by her duties as monarch. The duke, who had already given up a promising naval career as the king’s health worsened, was destined to walk one step behind his wife.

In private, the Queen deferred to Philip, who led the family, and the couple’s successful marriage became the bedrock of the monarchy.

The duke was summed up by the Queen in 1997 in a speech to celebrate their golden wedding anniversary.

Paying tribute to her husband’s far-reaching influence, she said: “He is someone who doesn’t take easily to compliments.

“But he has, quite simply, been my strength and stay all these years, and I, and his whole family, and this and many other countries, owe him a debt greater than he would ever claim, or we shall ever know.”

After Philip retired from royal duties in 2017, he was said to have spent much of his time at Sandringham, enjoying the sanctuary as he painted and read.

But in the final period of their marriage, the couple found themselves living together as they shielded from the coronavirus pandemic at Windsor Castle.