Kindertransport memorial unveiled at port that helped save thousands of children 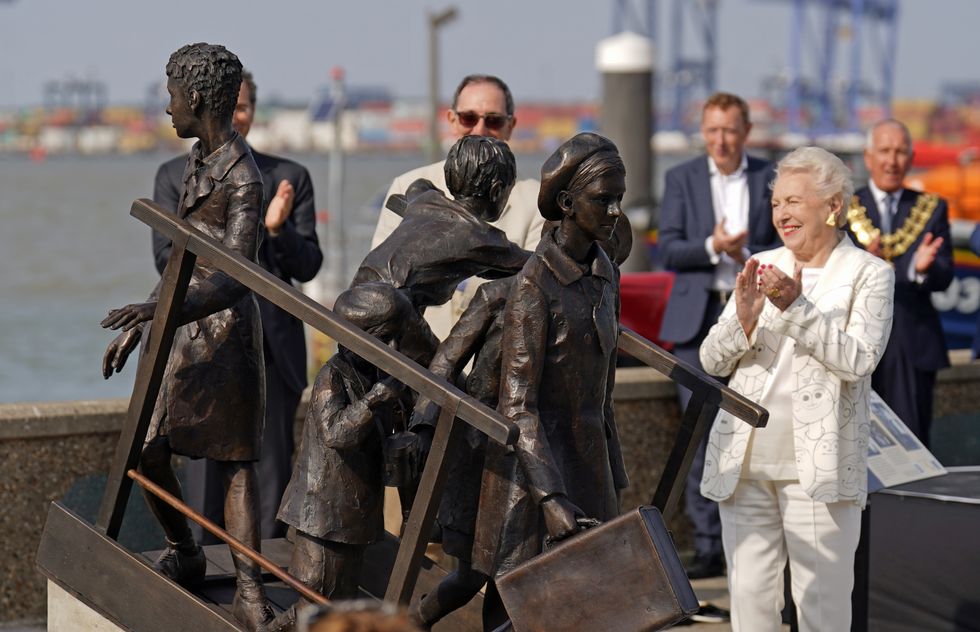 A memorial has been unveiled in the UK port town that was the main point of entry for most of the 10,000 children who were rescued from Nazi Europe on the Kindertransport.

It was sculpted by artist Ian Wolter, with inscriptions of quotes from child refugees and space between the figures so they can be viewed closely.

The Kindertransport was organised immediately after the anti-Jewish violence of Kristallnacht, often referred to as the Night of Broken Glass, in Germany in November 1938.

On arriving in Harwich, after all we had been through, we thought English people were angels

An evacuation of mostly Jewish children to Britain began, with the UK government waiving the need for visas, and agencies including World Jewish Relief helping to bring trainloads of children across.

The first children arrived in Harwich on December 2 1938 and the effort continued until war broke out nine months later.

Some continued their journey to London, while others spent a freezing winter at a holiday camp in Dovercourt Bay, around two miles from Harwich docks.

Guests at Thursday’s ceremony included more than 30 refugees who originally arrived in Britain on the Kindertransport in 1938 and 1939.

Dame Stephanie Shirley, who was five years old when she arrived in Harwich on a Kindertransport, unveiled the memorial.

She said: “I shall never forget my first sighting of Harwich as 1,000 of us children came in from the grey North Sea after a horrendous two-and-a-half days’ journey from Nazi Europe.”

Dr Vernon Katz, who also arrived in Britain on a Kindertransport, said: “At 11 years of age I boarded the train in Bunde Germany, heading towards the Netherlands.

“When the train stopped, some nice Dutch ladies gave us biscuits and drinks, and then we continued to Hoek van Holland, where we boarded a boat heading to England.

“On arriving in Harwich, after all we had been through, we thought English people were angels.”

Several Kindertransport memorials have been erected in Europe and the UK, including at Liverpool Street station in London, but Harwich had been neglected until now.

The German government contributed a “significant sum” to make the Harwich memorial possible, while the Association of Jewish Refugees (AJR) donated £22,500 and a grant was given by the Harwich Haven Authority Community Fund, a fund administered by the Essex Community Foundation.

Mike Levy, chairman of the Harwich Kindertransport Memorial and Learning Trust, said: “This is a day that so many of us have waited for.

“Now Harwich can take its full place in this remarkable part of British history.

“With the unveiling today, in some ways the journey of those children more than 80 years ago is complete.

“Today is a day of celebration, of commemoration, a looking back, but also, we hope, a way of looking forward to a kinder future.”

In addition to the memorial, an audio bench and new information boards have been installed around the town.

AJR chief executive Michael Newman said: “Harwich will always have a special place in the hearts of those refugees who arrived on the Kindertransport.

“The AJR is proud and delighted to be a prominent supporter of the effort to establish this memorial that honours them and their loved ones who sent them to safety, and to sponsor the development of the accompanying educational programme that will spread awareness of this vital history and inspire and educate generations of visitors.”

Guests at the unveiling of the memorial also included the German Ambassador to the UK, Miguel Berger, and Lord Eric Pickles, United Kingdom Special Envoy for post-Holocaust Issues.