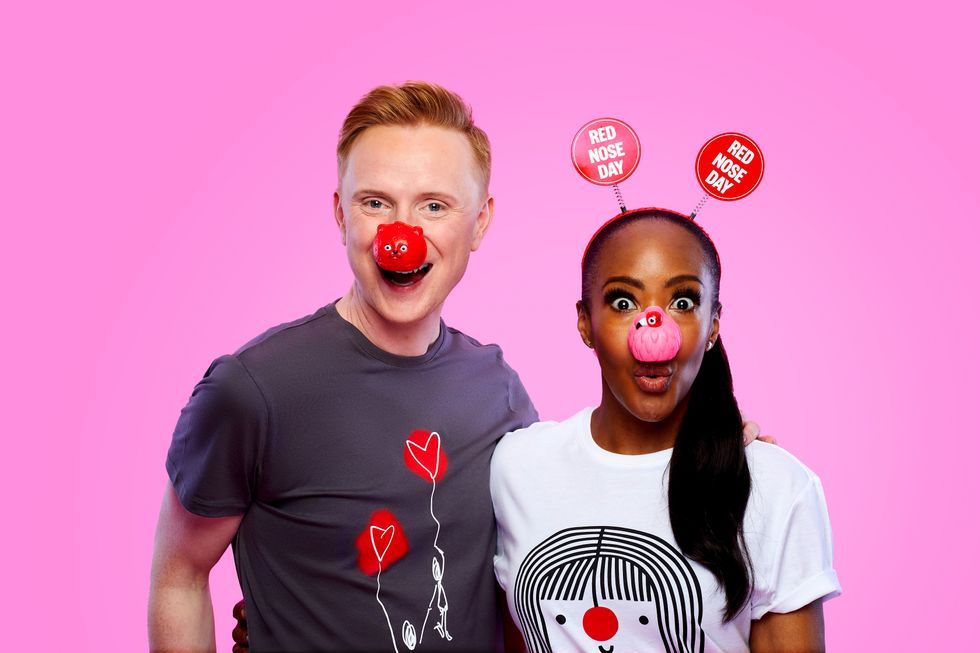 The One Show’s Angelica Bell and Owain Wyn Evans go head-to-head as they compete in the Red Nose and Spoon Race for Red Nose Day 2022. With tougher terrains and more adrenaline-filled challenges than last year, the Yellow Team and Blue Team will battle it out over four long days as they take on the ultimate race across the Lake District. Angelica and Owain are joined by some incredible teammates from Comic Relief funded projects across the UK (Nicky Johnston/Comic Relief)

Wyn Evans and Bell will be the team captains for this year’s The Red Nose and Spoon Race Challenge, which will see the two groups attempt to keep a red nose on a spoon while battling the challenging terrain of the national park.

The teams will face more adrenaline-filled challenges than last year while trying not to drop their noses – a mistake that would lead to a time penalty.

Wyn Evans and Bell will complete the endurance challenge, alongside two teammates from projects supported by Comic Relief, to help raise money for the charity.

Blue team captain Wyn Evans said: “I think we’ll learn a lot about ourselves. I’ll probably learn whether I can balance a red nose on a spoon or not!

“I do remember taking part in an egg and spoon race at my school and not being very good at it, so that’s good news for Angellica.

“But we’re doing it for a great cause so, whether it’s the blue team or the yellow team that end up winning, it doesn’t matter!”

The Welsh broadcaster previously raised £2 million for Children In Need after completing his 24-hour drumathon in November.

Yellow team captain Bell added: “I promised myself no more challenges but just couldn’t say no to Comic Relief let alone The One Show, which I’ve been part of from its inception!

“I’m looking forward to spending time with Owain and our teammates – finding out about their stories, working together to get through what may lie ahead and yes, throwing in a bit of competitiveness in the mix too!

“It will be hard, emotional and no doubt push us to the limit, but keeping us going will be the support from the public and knowing we are raising money for the charity. Let’s do it!”

The 2022 challenge starts on March 4 and viewers can follow the challenges as it unfolds on BBC’s The One Show at 7pm until the winning team is announced on March 11.

Please log in or register to upvote this article
Comic Relief