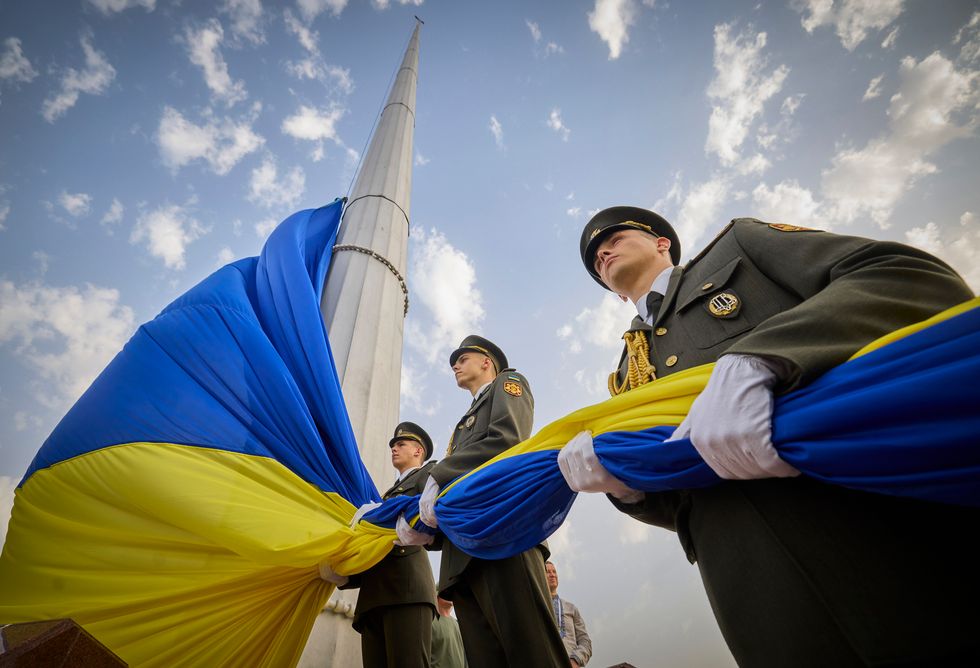 People in Ireland have raised five million euro on GoFundMe to help Ukrainian people since the outbreak of the war six months ago.

Vital medical supplies, such as ambulances and ventilators, were also delivered abroad thanks to help from Ukrainian doctors working in Ireland.

The online crowdfunding platform also stated that thousands of euro has been raised to help refugees settle in Ireland.

Figures released last week by the Central Statistics Office (CSO) show that a total of 47,962 people from Ukraine have sought refuge in Ireland since the outbreak of the war.

The amount of money raised by people in Ireland to help people in Ukraine.

It comes as Ukrainians in Ireland are marking 31 years of their country’s independence from the Moscow-controlled former Soviet Union.

Irish woman Jennifer Drum started a GoFundMe to support a Ukrainian father, his wife and three children in coming over to Ireland.

Returning to live in Co Meath again, Mr Sydoryshyn was able to seek safety in Ireland, get a job and settle his family.

Ms Drum told GoFundMe: “They are still with us and they’re doing grand.

“We were able to buy the children school uniforms, a washing machine, a fridge.

“Yaro has got a job full-time and they’re settling in great. We wanted to be able to give them their own independence. It’s brilliant that they’ve been able to stay here.”

We were able to buy the children school uniforms, a washing machine, a fridge.

In the last four months, money was used to provide a monthly supply of food, at 30 euro per person, launch a 24/7 hotline, and set up mental health support, at 25 euro per person.

It also helped evacuate more than 120 people from hot zones abroad and to the western part of Ukraine, provide medicine for 245 people, and evacuate 21 people with severe disabilities by ambulance abroad.

A group of Ukrainian doctors working in Irish healthcare were also able to raise more than 780,000 euro.

Hundreds of Ukrainians in Ireland are marking Independence Day through a number of events around the country.

Meanwhile, Irish ambassador to Ukraine Therese Healey said the reopening of the embassy in recent days was “significant”.

Minister for Foreign Affairs Simon Coveney confirmed earlier this week that the embassy based in Kyiv has reopened, and operating on a limited basis.

“This marks the next phase of the embassy’s establishment,” Ms Healey said.

“Yesterday we marked the formal opening of the embassy one year ago by Minister Coveney when he visited Ukraine.

This truly is a date for Ukrainians to celebrate, wherever they are in the world today.

“We’re very glad to be back in Kyiv. This is following a risk assessment, a evaluation of when and how we could come back and the necessary supports we put in place for our team to be here again.

“Our core stuff is in place now and we’re evaluating our operational modalities. We’ll keep those under constant review because obviously the situation is subject to change and it’s very much now about all relearning about how to work well in Kyiv.”

She said that while it was a tough decision to leave Ukraine at the outbreak of the war, it was the right decision.

“I’ve since been back for short trips, including with Minister and Taoiseach (Micheal Martin) when he visited last month,” she told RTE.

“I’m here because I’ve chosen this posting, I don’t want to be anywhere else.”

“Of course, Ukrainian identity goes back hundreds, if not thousands of years before this formal date. But this truly is a date for Ukrainians to celebrate, wherever they are in the world today.

“I think it’s extraordinary how the Ukrainian system has functioned so well under such intense pressures.

“When you get to know Ukrainian people, as myself and my team did those months ago when we when we established our embassy, it isn’t that surprising to us.

“They want their country to be open. They want to be able to make choices about their own destiny and they have networks across the world.”

This is what it's like to crash into an asteroid

Love Island stars become step-siblings after their parents got married