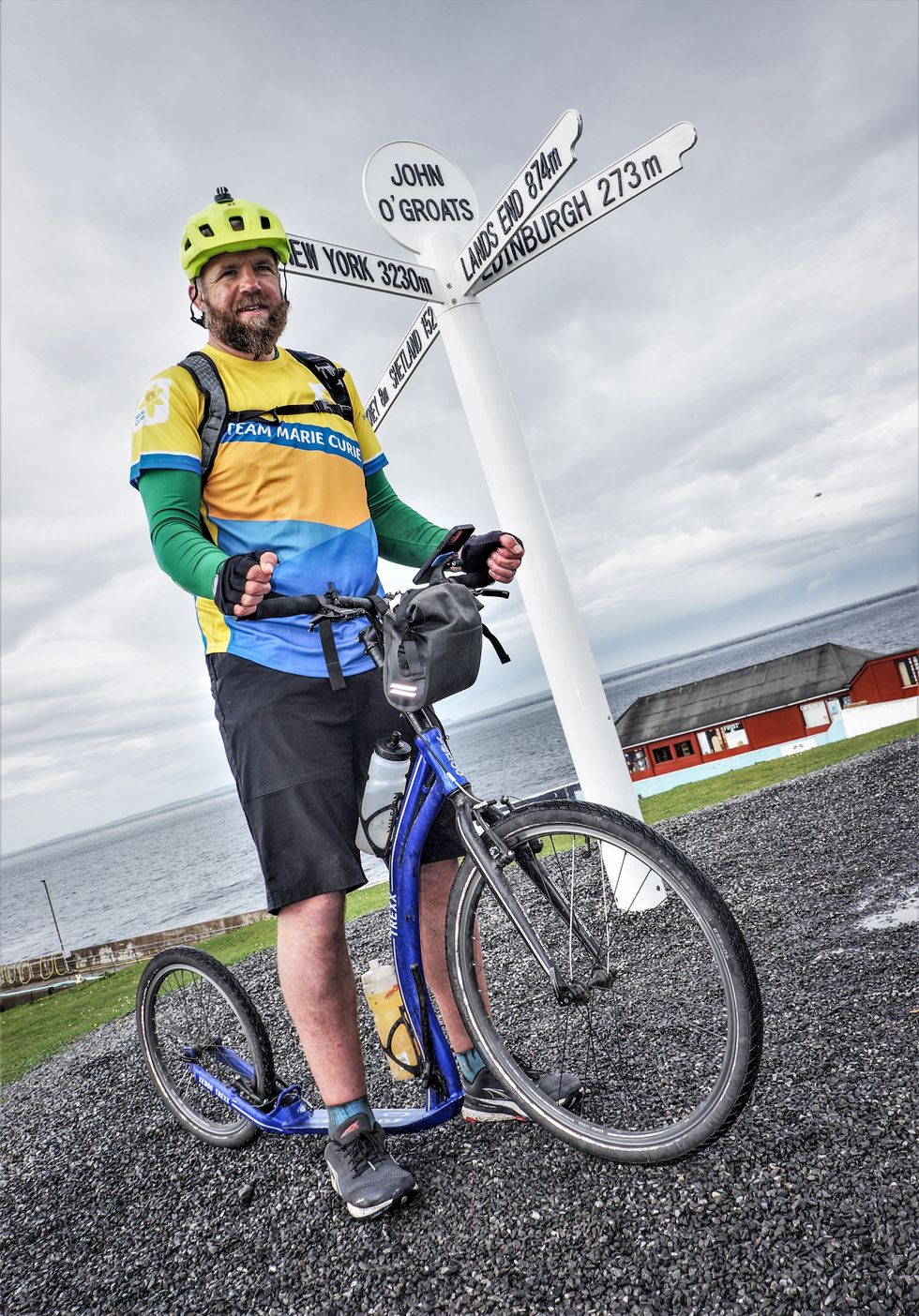 A widower is “over the moon” after setting a new Guinness World Record scooting from Land’s End to John O’Groats in memory of his late wife and raising thousands for charity.

He carried out the challenge in memory of his wife, Eva, who died of cancer in 2018, when she was just 37 years old.

Mr Jamieson has supported end-of-life charity Marie Curie since 2018, raising more than £20,000 through his fundraising – including more than £9,000 from his scooting expedition.

He travelled on average about 95 miles a day on his blue kick-scooter, which was nicknamed Big Blue Magoo by his 13-year-old daughter Beth.

The father-of-two said: “Not only am I over the moon to have set a new Guinness World Record, I’ve been blown away by the support I have received over the 11 days.

“Whether it’s been people on the streets who have cheered me on, to making donations to my Just Giving page, knowing that people across the whole country were supporting me is what helped me get through it.

“It was physically hard going from one end of the country to the other, but it was a case of mind over matter.

“Knowing that when I got to close to where I live in Scotland and having my two kids, Beth and Oscar, join me, really meant so much to us as a family.

“I did this challenge in memory of my wife, Eva, who died of cancer in 2018, when she was just 37 years old, which was just devasting for the family.

“To mark what would’ve been her 40th birthday last July, I ran 40 marathons in 40 weeks and next year I’m going to climb Mount Kilimanjaro as Eva always wanted to do that, so I’ll begin training for that – but once I’ve had a rest from scooting almost 1,000 miles.”

Mr Jamieson, a personal trainer who owns SJ Fitness Coaching, started his journey on April 30 at Land’s End and passed through Taunton, Bristol, Warrington and Carlisle, before crossing the border into Scotland.

He continued through Moffat, South Queensferry, Perth, Inverness and Dingwall, before making the final stretch up to John O’Groats on Tuesday.

His children, Beth and 11-year-old Oscar, joined him for a while on their bikes when he was in his home area.

Marie Curie community fundraiser Jim Stewart said: “I never had any doubt Stuart would be able to do this as I knew he was so committed to setting a new Guinness World Record in memory of Eva.

“The fact he has also raised over £9,000 for Marie Curie is absolutely fantastic.

“He’s incredibly inspiring and having followed him for some of his journey, I can’t begin to imagine how physically tiring it must have been for him.

“But knowing he had the support of the country behind, not to mention his two children willing him on, spurred him on.”

Anyone who wants to donate can do so at https://www.justgiving.com/fundraising/scoot-lejog