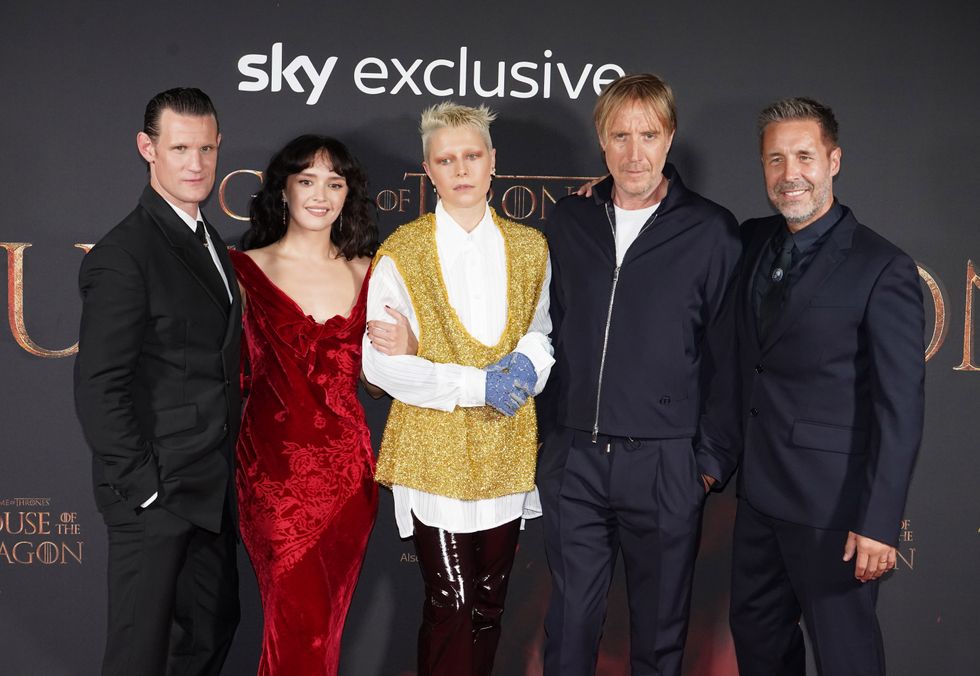 House Of The Dragon star Rhys Ifans said acting in the Game Of Thrones prequel was a great opportunity to work with “incredibly talented” actors he admires including Matt Smith, Paddy Considine and Olivia Cooke.

The star-studded cast and creators of the series walked the red carpet on Monday in Leicester Square, ahead of the show’s launch on Sky.

House Of The Dragon is a fantasy tale based on author George RR Martin’s Fire And Blood which is set 200 years before the events of Game Of Thrones.

The HBO drama chronicles the beginning of the end of House Targaryen and the events leading up to the Targaryen civil war, known as the Dance of the Dragons.

Notting Hill star Rhys Ifans, 55, who plays Cooke’s on-screen father and hand of the king Otto Hightower, told the PA news agency: “It’s always wonderful when you know you are going to be working with somebody who is incredibly talented.

“I think what defines a great actor is creative generosity and every single actor who I worked with on this show has that in bounds.

“We’ve become very close as a cast as a result, beautiful.”

He added: “I heard in lockdown that I was going to do it, I got a script and read a few episodes.

“I think Paddy Considine, Matt Smith and Olivia Cooke were already on board, three actors I really admire, they’d obviously read it and liked it, so I thought ‘if they’re in, I’m in’.

“It was a great opportunity to work with some quality talent.”

The big-name series also stars Line Of Duty, Doctor Who and Death In Paradise actor Steve Toussaint, who plays Lord Corlys Velaryon, a famed nautical adventurer who has built his house into a powerful and wealthy seat.

He told the PA news agency: “It was a little intimidating at first because you think ‘Oh my God, Rhys, Paddy, Olivia, Matt’ but then you realise we all have exactly the same insecurities, it’s nice to know they’re human.

“When you walk up to the sets and see all the wonderful work that has been done it is a bit awe-inspiring, but the actual work of acting is exactly the same, you look into another actor’s eyes, extract truth from them.”

The British actor, who is of Barbadian descent, said he received racist abuse online after he was cast as a character which is described as having white skin, ghostly pale hair and purple eyes in the book, but reimagined as black nobles with long silver dreadlocks in the series.

He told the PA news agency: “I am not going to shy away from talking about it, it is a fact, certainly people have let it be known that they aren’t happy in no uncertain terms.

“There are shows that come on TV that I don’t watch, there are actors I don’t like, but I don’t feel the need to broadcast that to anybody, I just don’t watch them.

“If you feel the need to broadcast to the world that you don’t like the show or, in fact, as some people have, get in contact with me on my timeline and tell me how much you don’t want me to not be in it then there is something wrong with your life, you need to get out and do something.

“If that’s what you have to do then there’s something you’re lacking and I feel sorry for you.”

Speaking of the cast, showrunner Ryan Condal told the PA news agency: “It’s like having a garage full of Ferraris, everyone is fun to drive around.

“They all make me look better as a writer, they are all wonderful to work with, they’re smart, most of them come from a theatre background, so they really get into the work of the character.”

A replica of the Iron Throne from the series, which was erected outside the Tower of London last week, also featured at the premiere on Monday with stars taking turns to pose on it.

Co-creator Martin, who served as executive producer on the series, was forced to miss the world premiere of HBO’s House Of The Dragon on July 28 after testing positive for Covid-19 and did not appear at the London premiere.