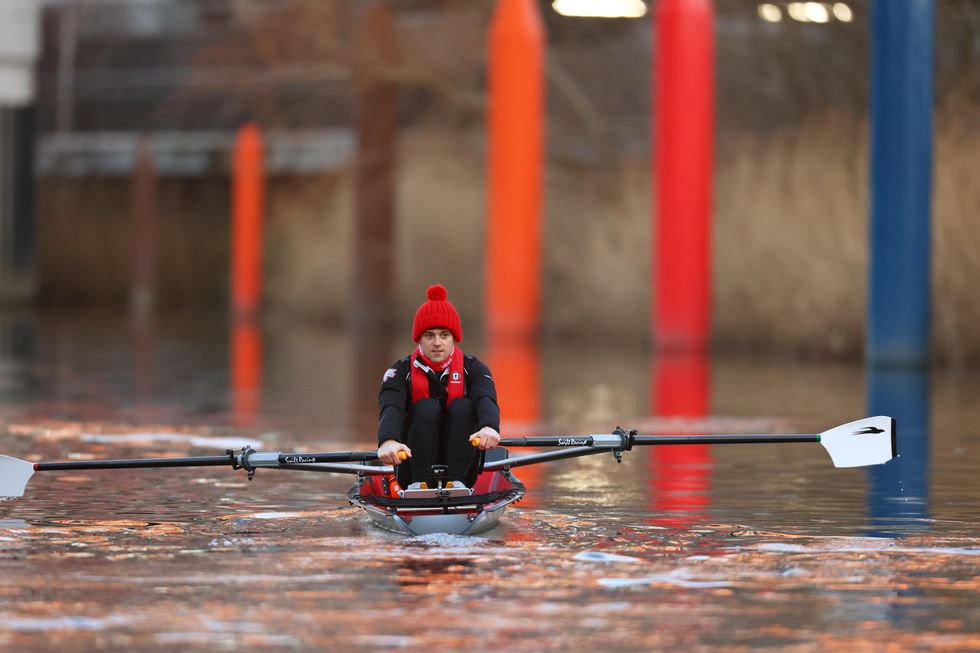 Tom Daley has set off on a homecoming challenge that will see him tackle a gruelling four-day journey from London to Plymouth by foot, water, boat and bike, to raise money for Comic Relief.

Daley, 27, embarked on the first leg of his journey at 7am on Monday, when he left the Aquatics Centre in Stratford for a six-mile row to Tower Pier.

The Aquatics Centre is a place close to Daley’s heart, as it is not only where he won his first Olympic medal in 2012 but also where his father’s ashes are placed at the foot of the diving board.

The Olympic gold medallist faced wind and rain during this morning’s row and at one point lost his nerve and capsized into the freezing Thames.

Daley said: “The rowing is the most technical part. I’ve found the rowing particularly difficult, and I did fall in quite soon after starting out on the Thames.

“I was looking out at the Thames and thought it looked horrible: the waves were going wild, and the winds were blowing. If I’m honest, I didn’t know if I was going to make it to Tower Bridge, but I did my best.”

Comic Relief challenge veteran Davina McCall and Daley’s diving partner Matty Lee, with whom he won gold at the Tokyo 2020 Olympic games, were both present to wave him off on his challenge.

McCall, 54, said: “Watching Tom this morning has made me relive my Comic Relief challenge – it has brought back so many memories. I remember the excitement and trepidation and how being out on the road, or water, is never like it is in your training.”

After completing the six-mile row, Daley now faces a 60-mile cycle from London’s Tower Bridge to the Redgrave Pinsent Rowing Lake in Reading.

Lee, 23, asked the British public to get behind his diving partner, saying: “I wish Tom the best of luck and I’m so proud of the amazing challenge he’s undertaking and hope the great British public get behind him and offer their support in the same way they did with us in the Tokyo 2020 Olympics.”

Daley’s challenging journey will be documented for a special BBC One and iPlayer documentary airing in March, ahead of the return of Comic Relief’s Red Nose day on March 18.

Assistance dog at the Paralympics wins its own medal