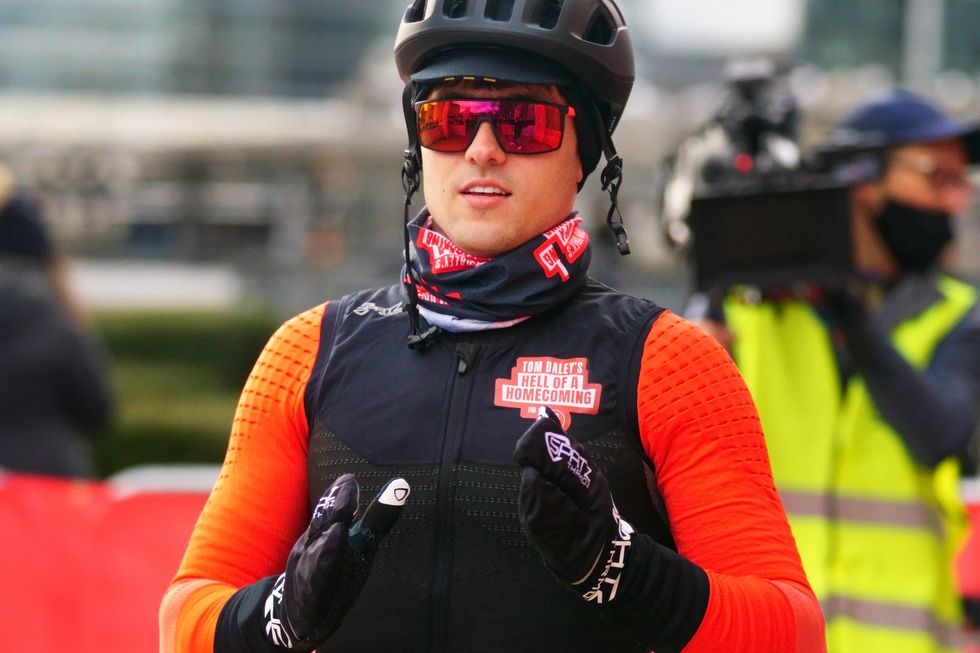 Tom Daley has completed an outdoor swim in bitterly cold temperatures as he continued his gruelling four-day challenge to raise money for Comic Relief.

The Olympic gold-medallist diver was thrown into the deep end on the second day of his Hell Of A Homecoming Red Nose Day Challenge, battling the elements to complete a 1,600-metre open water swim in Redgrave Pinsent Rowing Lake in Reading.

Daley, 27, said: “As I was getting into the water, I was feeling as ready as I’ll ever be, but the idea of swimming such a long distance in water that was 5.2 degrees was extremely daunting.

“Halfway round the lake, I was going into the wind and it really picked up.

“It took me a lot longer to complete the second half. Every time I was doing a stroke, it felt like I wasn’t getting anywhere, which was so frustrating.

“But I just had to keep going. When I got to the finish line, it was just a relief to be out of the cold water and then rushed into the warm.”

Supporting him from the sidelines was Paralympic swimming gold-medallist Ellie Simmonds, who said she was “blown away” with his efforts.

She added: “For Tom to do that swim is phenomenal.

“He didn’t stop, he just kept on going. I was quite impressed with his stroke too, he’s a diver but that stroke of his, that freestyle stroke was phenomenal.

“To see him achieve that is absolutely amazing.

“His swimming trainer Kerri-Anne earlier said that for open water swimming, if the temperature is below 16 degrees the event gets cancelled. For this it was less than six degrees!”

After completing the swim, Daley handed out red noses before jumping on his bike to start a 63-mile cycle from Redgrave Pinsent Rowing Lake to Southampton.

He said: “I am feeling exhausted and tired, and now I have to get back on the bike to cycle to Southampton.

“It’s going to take a lot for me to get back out there and keep going, but I am going to do it because it’s worth it and it’s for a good cause.”

Daley set off on his homecoming tour on Monday, when he left the London Aquatics Centre in Stratford for a six-mile row to Tower Pier before a 60-mile cycle to the Redgrave Pinsent Rowing Lake.

His challenging journey will be documented for a special BBC One and iPlayer documentary airing in March, ahead of the return of Comic Relief’s Red Nose Day on March 18.

Please log in or register to upvote this article
Tom Daley