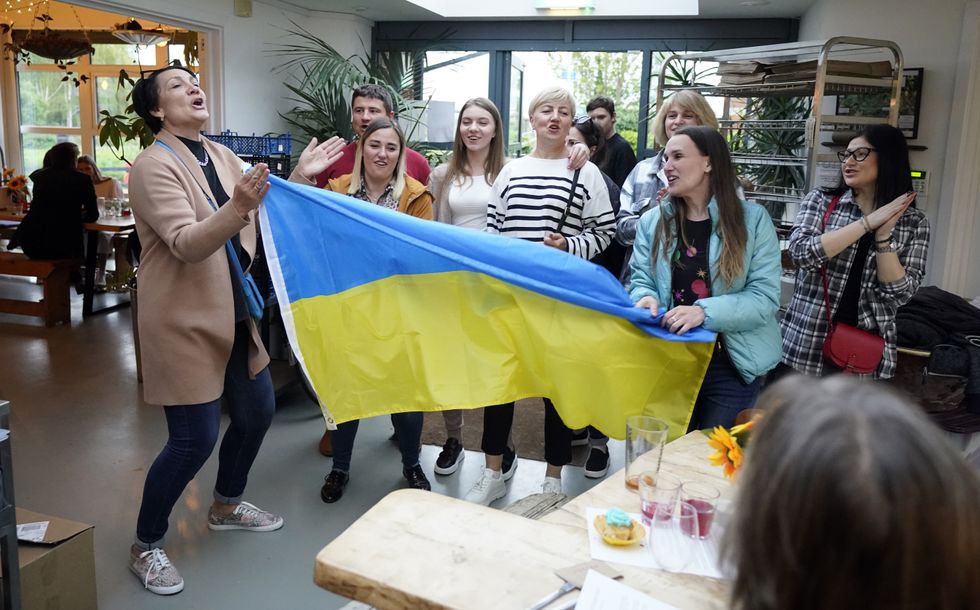 Around £1,500 was raised for charity as refugees in Somerset cooked traditional Ukrainian meals for more than 70 people in a sold-out event.

Ukrainian refugees were offered free rein of the kitchen at The Bridge cafe in Langport on Friday to cook a three-course dinner for local people in aid of The Ukrainian Red Cross Society.

Steve Dury, 59, is UK sponsor of two of the head chefs in charge of the supper and described the evening as “a great success”.

“Everyone just had a fabulous, fabulous evening,” the local government officer told the PA news agency.

One of the dishes served was golubsty, a stuffed cabbage leaf with rice, pork and beef (Andrew Matthews/PA)PA Wire/PA Images - Andrew Matthews

“What was nice about it was as well as bringing the local community together, it brought the Ukrainians here together.

“They could speak Ukrainian together.

“It was very, very, very nice – very quite emotional, I think, both for the Ukrainians and for the British hosts.”

Mr Dury said tickets for the dinner were sold out in just a few days but “they could have sold it out twice over it was so popular”.

Since April 12, he has been host to Liudmyla Tarasenko and her 15-year-old daughter, Daria, Liudmyla’s 27-year-old niece Yulia Svichkar and her three-year-old son, Egor, as well as 13-year-old Denys Chemodanov.

Ms Tarasenko and Ms Svichkar were among the team making traditional Ukrainian food such as golubsty, a stuffed cabbage leaf with rice, beef and pork filling, and cupcakes decorated blue and yellow alongside a fruit compote.

“We had two musicians who played for free, a winery nearby donated free wine,” Mr Dury said.

“There’s a butcher in Langport that donated the meat, so lots of local businesses in the community all pulled together.

Mr Dury added the feedback on the food was “very positive”.

“There was a lot of people who had their first ever Ukrainian meal.

“With the food, the bar, music, (it was) a very relaxed, very friendly evening.”

He said one of the highlights was when many of the refugees decided to sing along to some backing music they had on a tape.

“It brought them together,” Mr Dury said.

“Some of them hadn’t met before, it’s the first time they had met – so they were able to network, meet members of the local community.

“Lots of the Ukrainian kids were around, so they all had fun playing in the garden.”

Mr Dury praised the local community in Langport for their generosity and flexibility.

“(The staff at The Bridge) were absolutely magnificent,” he said.

Cupcakes were iced blue and yellow, the colours of the Ukrainian flag, to serve for dessert (Andrew Matthews/PA)PA Wire/PA Images - Andrew Matthews

“They gave up their cafe for the evening, allowed everyone to come into the kitchen and cook, they bought a lot of ingredients and made the space available.

“The people in Langport have been so, so welcoming and so helpful with donations and assistance.”

Please log in or register to upvote this article
RussiaSomersetUkraine