Ukrainian mosaics destroyed in the war to be recreated for exhibition 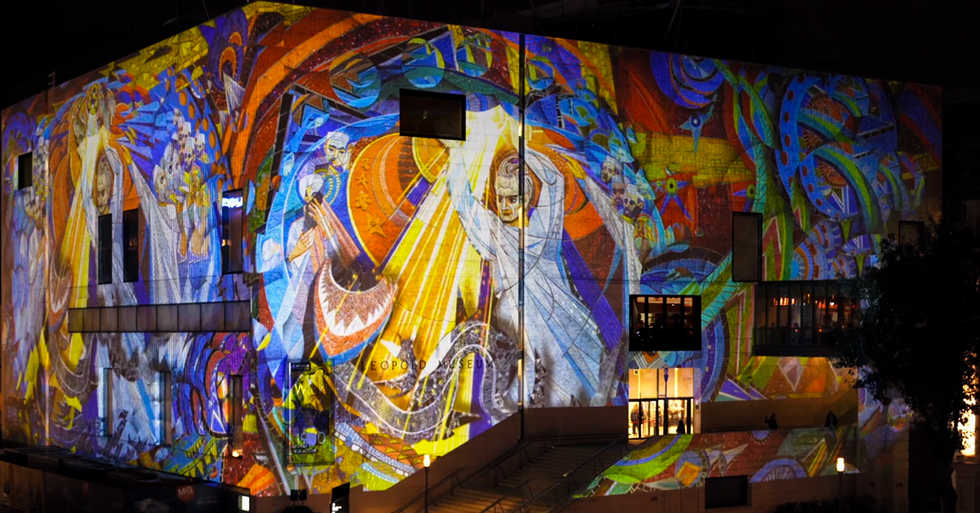 Mosaic at the exhibition (Andrii Perevodchyk for the Ukrainian Institute/PA)

Ukrainian mosaics destroyed in the war with Russia are to be recreated at a digital exhibition to provide a “memory” of Ukraine’s rich cultural heritage.

An audio-visual instalment called Discover Ukraine: Bits Destroyed, from the British Council and the Ukrainian Institute, is to showcase 56 “monumental” mosaics created by Ukrainian artists between the 1960s and 1980s. Many are under threat or have already succumbed to Russian shelling.

The “brightly coloured, hyper-intricate” mosaics have been recreated for the exhibition. Sounds which emulate the fighting will accompany the artwork to represent the country’s losses.

Some of the mosaics to be brought to life are the Tree Of Life and the Boryviter (Kestrel) by Alla Horska, which were created in Mariupol in 1967 and destroyed by Russian shelling on July 22 2022.

Tetyana Filevska, the creative director of the Ukrainian Institute, said that the project was “a way to keep at least a memory of” Ukraine’s rich heritage.

“Ukrainian culture is one of the targets in the Russian war against Ukraine. Since February 24, we have lost hundreds of cultural objects around the whole country,” she said.

This project allows us to learn about Ukraine’s art that is being demolished by Russian bombs every day. It is a way to keep at least a memory of it as part of Ukraine’s rich heritage that the world has just started to discover.

“Art project Discover Ukraine: Bits Destroyed is animating images of the Ukrainian mosaics that were created in the middle of the 20th century.

“This part of our heritage is difficult to preserve during the devastating war. A significant part of mosaics will not survive in it.

“This project allows us to learn about Ukraine’s art that is being demolished by Russian bombs every day. It is a way to keep at least a memory of it as part of Ukraine’s rich heritage that the world has just started to discover.”

Yevgen Nikiforov, the curator of the exhibition, added that “through the display of these works in London, we will inscribe this layer of Ukrainian culture, still not sufficiently studied, in the history of world art”.

Mosaics have been an important architectural feature of Ukrainian public spaces, and the current installation was originally created in 2019 to celebrate the tradition of mosaics in the country. The aim now is to raise awareness of the destruction of this fundamental part of Ukrainian heritage and the importance of preservation.

The exhibit is to part of the Greenwich+Docklands International Festival and is free to attend from August 26 to 29, and more details can be accessed via this link: https://festival.org/gdif/whats-on/discover-ukraine-bits-destroyed/