Ukrainian refugees in Manchester given free walking tour by volunteers 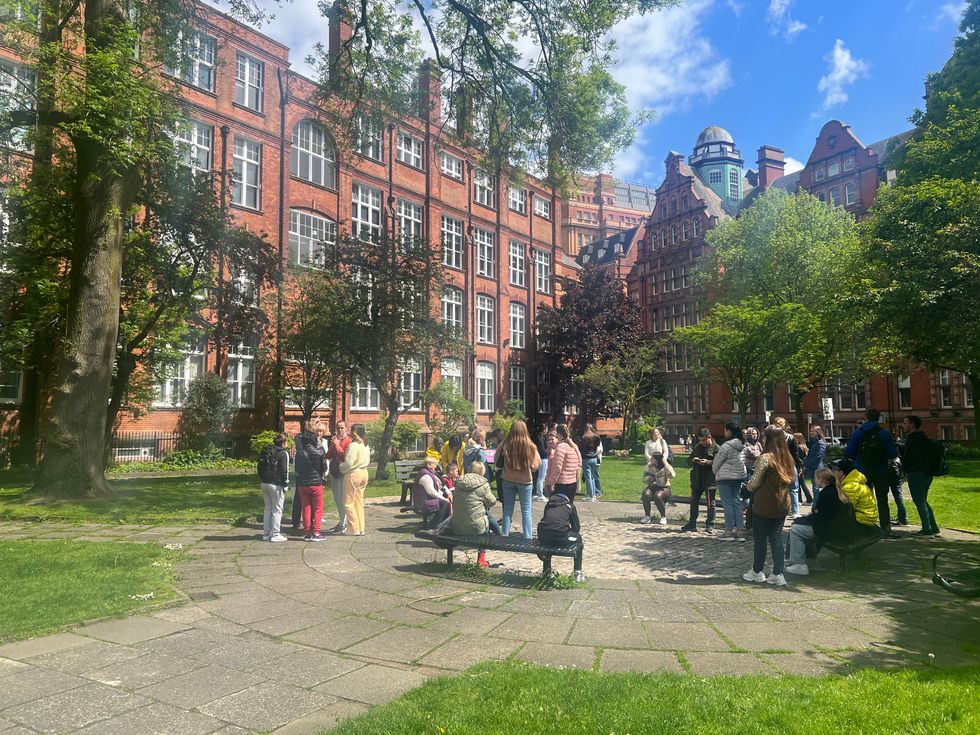 Ukrainian refugees gather for a tour of Manchester (Maria Romanenko/PA)

More than 70 Ukrainian refugees were given a free tour of Manchester by volunteers hoping to help them settle in their new home city.

Ukrainian journalist Maria Romanenko and guide Meghan Marie Griffith, of Free Manchester Walking Tours, organised Thursday’s tour for recent arrivals to the North West, who explored the stories of Alan Turing, the Hacienda, and the city’s rapid evolution by walking its streets.

“We were experimenting a bit,” Ms Romanenko told the PA news agency.

“I don’t think this has been done before in the UK, or certainly in Manchester.

“I feel like I can relate to the people coming here fleeing the war and I wanted to do something to help them feel welcome.”

Having herself fled the Ukrainian capital with her Mancunian partner in the wake of the Russian invasion, Ms Romanenko sees parallels between Manchester and Kyiv’s resilience in the face of adversity.

“What stood out to me yesterday is how Manchester keeps reinventing itself; for example, the IRA bomb in 1996, even though it destroyed most of the city centre, it allowed for this cultural rebirth.

“I think Kyiv can probably relate to that as well; (after) the Euromaidan revolution we experienced a cultural boom.

“I hope that the mention of these horrible things that happened to Manchester, such as the IRA bomb or the attack at the Ariana Grande concert, shows people that, yes, it’s very hard for Ukraine now but there is a way that people can unite and build something new.

I’m not a professional translator but I thought “hey, if I can offer my language skills for a free tour for Ukraini… https://t.co/MVPKg0Pe7V
— Maria Romanenko (@Maria Romanenko) 1652383476

“I hope that some of the examples mentioned in the tour can give people hope.”

As well as helping people learn about the city, the event on Thursday provided a way for Ukrainians to find each other in the city.

“Two people had a friend in common but they had never met before, and it turned out that they have something they can talk about.

“It was a great way for Ukrainians to meet each other so they don’t get too lonely when they get to what for most people is a completely new country.”

She hopes their efforts will lead to more organised action from authorities to help refugees find their feet.

“There are people willing to give up their time,” Ms Romanenko said, “but they don’t know how, they’ve never been approached by the Government.”

The tour has drawn the attention of those in a position to help further: “Somebody from Manchester City Council turned up before to start just to chat to me, we are going to have a meeting at some point.

“It’s small steps like this, but hopefully it will lead to better engagement with Ukrainians and more effort from the local government to help them settle in.”

Please log in or register to upvote this article
Manchester