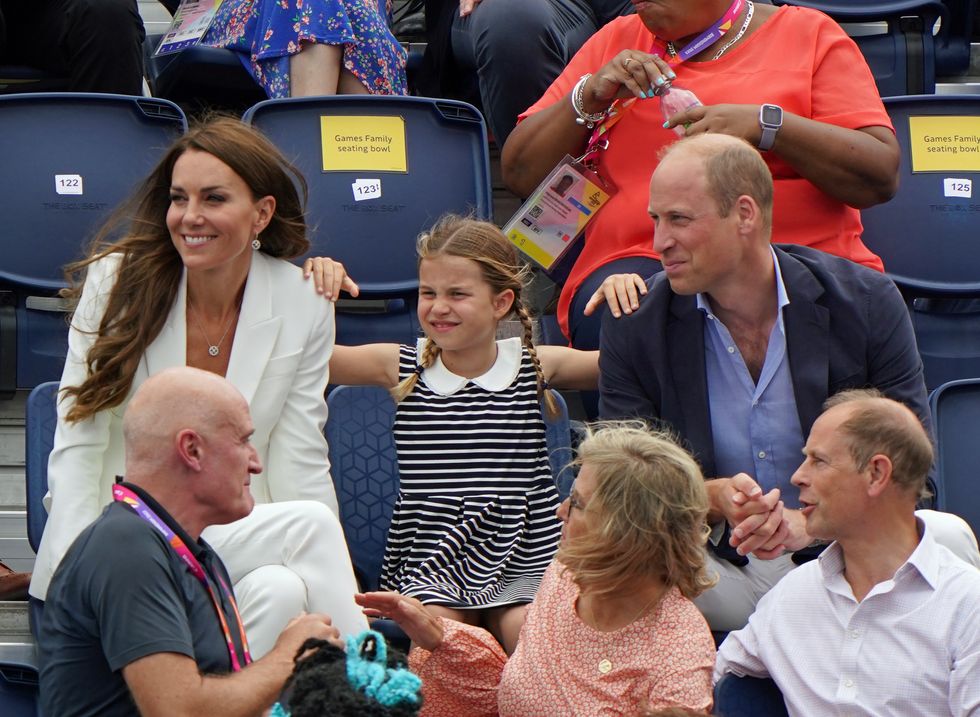 The Duke and Duchess of Cambridge sat with a grinning Princess Charlotte as they enjoyed a packed day of Commonwealth Games sport.

William and Kate arrived first at the aquatics centre in Sandwell, West Midlands, on Tuesday shortly after the Earl and Countess of Wessex and their children, Lady Louise and James.

Before the duke and duchess’s arrival, Edward, who is vice patron of the Commonwealth Games, shared a joke with former prime minister Theresa May as he entered Sandwell Aquatics Centre during the men’s 1,500m freestyle heats.

The duke and duchess arrived shortly after with Princess Charlotte and sat in front of the Wessex family.

Kate, dressed in a white blazer and trousers, embraced Edward, Sophie and their children before taking her seat next to Charlotte.

The duchess was pointing and explaining things to her daughter, while William held one of the official programmes.

The royals were cheering and applauding alongside the crowd for England 1,500m freestyle hopeful Luke Turley.

After rolling her eyes following a comment from her father, Charlotte then cracked a smile as Turley’s heat came to a close.

In the afternoon, the duke and duchess watched the hockey as England’s women took on India at the University of Birmingham’s Selly Oak city campus.

Arriving 11 minutes after the start, Kate and William, with Princess Charlotte, took their seats behind Edward, Sophie and their children.

England had got off to a flier, already netting a goal early in the first quarter, before the Cambridges had taken their seats.

Sophie turned in her seat to chat with Kate while Charlotte, wearing a black and white striped summer dress, shook hands with a Games official sat in front.

Having missed the opener, the royals did not have to wait long for more on-field drama.

Edward clutched both hands to his head when India appeared to have equalised.

There was a nervous wait as a video referral was run to check if the ball had crossed the line at the 15-minute mark in the first quarter.

But there was relieved applause from the royals and spectators alike as the replay showed a narrow let-off for the home side.

Later, Kate leaned in close to Charlotte during the game, explaining a point of detail to her daughter during play.

The princess, stretching her arms up to her head on a couple of occasions and blowing out her cheeks at another point, seemed keen to take it all in.

At half-time, the Cambridges headed off to another Games engagement – with the sure-footed Charlotte leading down the steps of the stand, with her mother and father close behind.

Well into the third quarter, the Wessexes were able to cheer and applaud as England’s Tess Howard then scored the team’s second goal with a low, sweeping drive into the corner of the net.

Please log in or register to upvote this article
BirminghamCharlotteCommonwealth GamesHockeyRoyalSophieSwimming