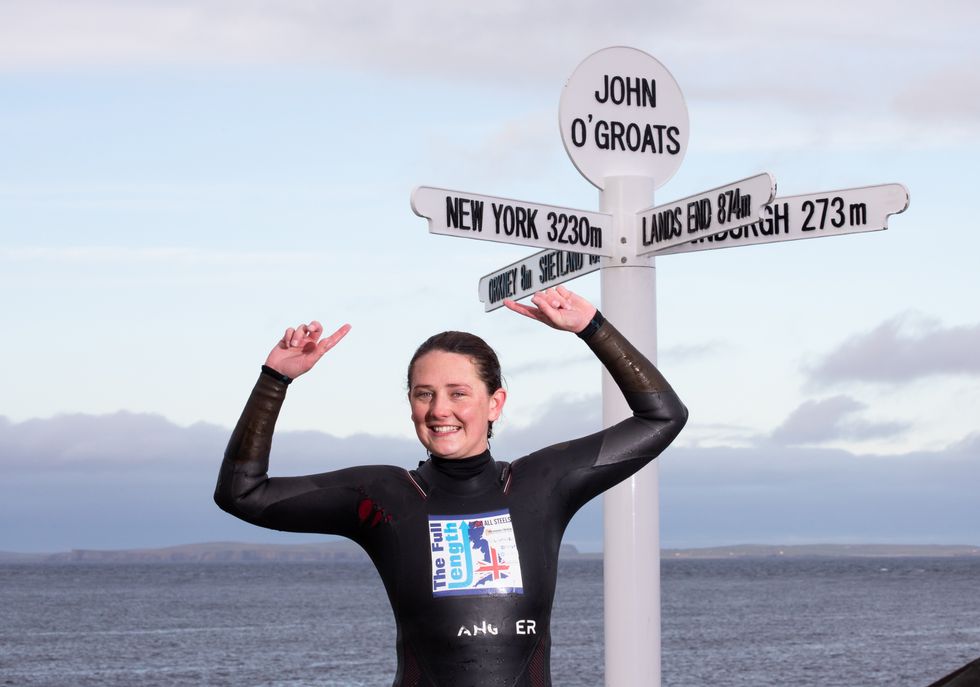 A 23-year-old has become the first woman in the world to swim from Land’s End to John O’Groats.

Jasmine Harrison, from Thirsk in North Yorkshire, completed the gruelling 900-mile swim on Tuesday after about three-and-a-half months of swimming.

The distance is the equivalent of swimming about 58,000 lengths of a 25m pool.

The swimming teacher and motivational speaker already holds a world record for being the youngest woman to row solo across the Atlantic in February last year.

Battling thousands of jellyfish, being followed by a shark and swimming into a live military exercise, Ms Harrison swam between four and 12 hours a day after first entering the water at Land’s End in western Cornwall on July 1.

Here swims were often split into two shifts, broken up by eating and sleeping in her support boat.

Her longest swim was 12 hours, and the maximum distance swum in any one shift was 14 nautical miles – about 16 miles – with 27 nautical miles (31 miles) being the most she covered in one day.

And the world record holder’s top speed during the trip was an impressive 16.1mph.

Much of Ms Harrison’s swimming took place at night, during which, on one occasion, she was approached by a large whale that lurked one metre below her, she said.

But that was not her only interaction with the creatures of the ocean.

The expert swimmer was stung multiple times on her face, hands and feet by jellyfish.

Ms Harrison sometimes wore a neoprene mask fashioned from a swimming hood to protect her face, which helped, but it failed to prevent the odd small jellyfish drifting into her mouth.

She was closely followed by a basking shark swimming through the whirlpools of the Corryvreckan Gulf in Scotland and, while north of the border, she also swam alongside whales, dolphins and seals when passing under the Skye Bridge.

Despite spectacular sites along the way, Ms Harrison said there were both mental and physical challenges.

For a start, the water was cold, and in some areas, she came across busy shipping lanes.

One alarming moment was when she found herself swimming as live rounds flew overhead during Exercise Joint Warrior, the largest military exercise in Europe involving the Royal Navy, the Royal Air Force and the British Army, as well as forces from other nations, which was taking place in Cape Wrath in north-west Scotland.

She also experienced painful chafing from her wetsuit and suffered from “salt mouth”, a condition which strips skin from the tongue and throat and makes it hard to swallow.

At one point in the Bristol Channel, Ms Harrison only progressed three miles in six hours, which she said was tough mentally.

Speaking after the challenge, the world record-holder said: “From the moment I first dived into the water to finally reaching dry land again, this has been a truly epic experience.

“From all the jellyfish to the constant cold and chafing from my wetsuit, it’s been really tough, but at the time it was also incredibly rewarding.”

When not swimming, the intrepid athlete would manage logistics of her trip, such as refuelling, crew changes and boat management.

She ate a normal diet throughout, but added “plenty of chocolate bars.”

Ms Harrison, who is a county ambassador for Girlguiding North Yorkshire North East, said she undertook the challenge to inspire others, but also to support two charities; Sea Shepherd UK, a marine conservation charity whose aim it is to end the destruction of ocean habitats, and Surfers Against Sewage, a charity working to keep UK coasts clean.

“This challenge has further inspired me to work with organisations driven by protecting the environment and I hope too that by doing this I have inspired others and shown that when you put your mind to something, anything is possible and you can overcome any obstacles that are put in your way,” she said.

Ms Harrison completed the record-breaking adventure at 4.43pm on Tuesday, before receiving a warm welcome back on land by her dog Bonnie and her parents, Susan and Keith, at John O’Groats.

Ms Harrison with her dog, Bonnie, after swimming the length of the UK in about three and a half months (Simon Price/Firstpix/PA)

She added: “I am looking forward to relaxing, getting a good night’s sleep, spending time with my dog and then getting out to share my story to help inspire others.”

Only two people have swum Land’s End to John O’Groats to date – Ross Edgley, who owns the record for being the first and the fastest Brit to do it in 61 days in 2018, and Sean Conway who also completed it in 2013.

Please log in or register to upvote this article
challengeCornwallRecordsScotlandSwimmerworld record